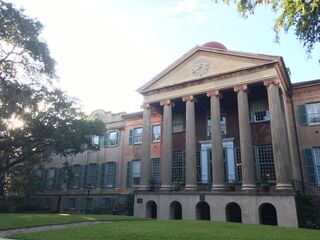 I was born in the Midwest, went to college there, lived nearly two decades in the Northeast and really never imagined that I would ever live in the South. I had fallen for some of the stereotypes that characterize the southern states—slow, uneducated, unrefined, racist, and backward.

But life unfolds in mysterious ways and so here I am, about to celebrate my tenth year of living in South Carolina, where I teach at the university.

In the days that have passed since the Supreme Court announced the decision to overturn Roe v. Wade, I have been hearing and reading about all sorts of murmurings—about how pro-choice students will want to avoid applying to or attending college in states like mine, and how college may look quite different in a post-Roe America. I have also seen posts on my newsfeed from colleagues I respect indicating that they plan to refuse to attend conferences in states like mine. They don’t want to conduct business in these states.

I get it. Though I am embarrassed to admit it now, I can imagine myself uttering many of these same sentiments and threats when I was living in Boston, Cleveland, or Madison all those years ago. I might have easily thought, who has time and patience for those backward, silly states, and why would anyone reach into their pockets and spend money in places like that if they can share their time and resources elsewhere?

The problem with this line of thinking is that it oddly mirrors the Supreme Court decision last week: Leaving things up to the states is tremendously individualistic. The message is that if you’re lucky enough to live in a state that aligns with your belief system, you’ll be okay, and if you’re not, well, to hell with you. This is the same thinking that allowed COVID decisions last year. My colleagues in many other states returned to work at universities amidst various combinations of mandatory vaccinations, mandatory masking, reduced numbers of people allowed in spaces, etc.

Our individual and public health, freedom, and life chances should not depend so heavily on the state in which one lives, works, and attends school. It is incumbent on residents of states with more expansive and progressive laws to care about and advocate for those in states without those same rights and privileges. We all live in a better world when we care about our neighbor rather than shun them or threaten to leave them in isolation. For example, even though the wetness and humidity of the Lowcountry leaves me feeling like I live in a swamp, I still worry about the water crisis in states like Nevada and Arizona. Different states are vulnerable to different things, based on physical climate issues as well as sociopolitical ones.

When I think about students and their families contemplating decisions about college with weighty issues like abortion access and restriction in the mix, I find myself deeply concerned and saddened. Here’s what I most want to say to them: