Like father, like son–almost everybody must have heard this. But is there any truth to this old saying?

Not much, it turns out.

On the one hand, it would seem logical that children are often like their parents because personality traits are partly heritable.

But this doesn’t mean that genes determine personality. In fact, genes don’t matter all that much for any given individual’s personality. This is because even identical twins who share 100 percent of their genes are usually far from having identical personalities, with the correlation between twins’ trait scores being about 0.40.

To understand that number, suppose that two genetically identical twins both complete a personality test and get feedback on a trait like extraversion, scoring low, medium, or high compared to people generally. The probability that both twins score similarly is only about 45 percent. In contrast, two strangers would score similarly with a 33 percent probability.

Twins’ similarity on a personality trait.

But any given parent and child only share about 50 percent of the genes that make people different from one another, not 100 percent like identical twins.* The other 50 percent of genes come from the other parent. So, as genes matter for personality, parents and children should be identical twins even less similar. And so it is.

To understand that number, imagine a study where many parents and children are asked to complete a personality questionnaire and then given feedback on their traits. Every child can score low, medium, or high compared to every other child in the study, and the same goes for every parent. If parents and children were similar, they would almost always get similar scores.

But with a 0.15 correlation, the probability that any given child and their parent score similarly is about 38 percent. This is only a few percentage points more than the 33 percent probability that even complete strangers get a similar score. 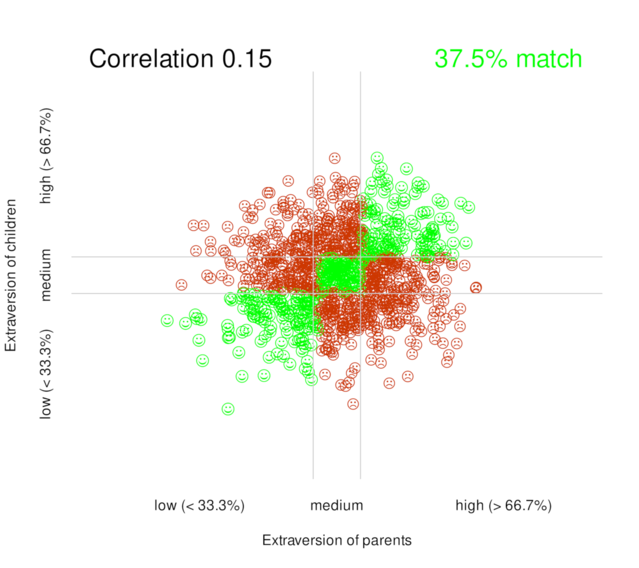 Parents’ and children’s similarity on a personality trait.

So, the genes that children and parents share do not make them much more similar than any two strangers. I don’t write this lightly because how genes shape people’s personality traits is one of my own research areas.

The typically low parent-child similarity is also consistent with another well-known finding from twin studies. On average, upbringing does not matter much for why people have similar or different personalities. If it did, children and parents would be more alike than they actually are, assuming that parents would usually pass on the influences that have shaped them.

But People Have Multiple Traits

So, the probability that parents and children score similarly in any given trait is about 38 percent, compared to the 33 percent similarity among strangers.

But people are usually described with more than one personality trait. These days, most scientists measure people’s personality traits using a Big Five questionnaire so that people get scores on five traits.

Many children being different from their parents also applies to traits other than personality. For example, parents’ and children’s IQ test scores correlate just over 0.40. Again, if we categorize people into low, medium, and high groups, this means about 45 probability that any given parent and their child fall into the same category. 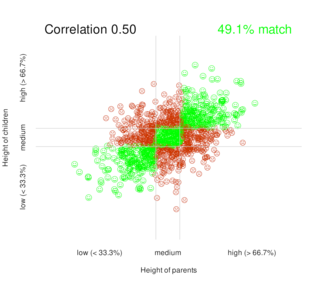 Or take height, which is one of the most heritable traits. Parents’ and children’s heights correlate about 0.50, which means just under 50 percent probability that a short, medium-height, or tall parent will also have a child of a similar height. So, it’s very common for parents and children to differ even in height. Never mind personality traits, then.

Don’t Judge a Person Based on Their Parents

So, don’t try to predict a person’s traits from those of their mom or dad. You will almost inevitably get them wrong in one way or another. Probably you will get most of them wrong, in fact.

Most parents, including myself, can probably agree with this. For better or worse, we usually cannot recognize ourselves in our children. Somehow they grow to be the persons they need to be rather than what we are or what we want them to be.

Oh, and this has at least one more application. Suppose someone proposes to you, but they have a trait that you are not a big fan of and that you worry may show up in your future children. But if you can live with that trait in your partner, then the trait is not a good reason to reject their proposal because it is a pretty good chance your children won’t have it.