Living alone is a modern phenomenon. For most of history, very few people lived alone. In the US, even as recently as 1960, only 7 million people lived alone; they accounted for just 13% of all households. By 2020, more than five times as many Americans were living alone, 36.2 million. Of course, the entire population was growing, but even as a proportion of all households, the rate of living alone had more than doubled, to 28%. Now, if you were to knock on any door at random in the US, you would be more likely to find a person living alone than a nuclear household of mom, dad, and kids. 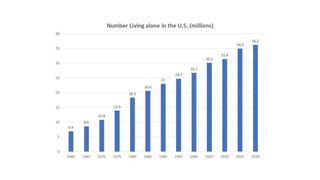 Number living alone in the US (millions).

Studies of dozens of countries all around the world show a similar trend. In the decades since 1960, the proportion of people living alone has been on the rise. That’s in part because of another global phenomenon—the rise of single people and the decline of marriage. But it’s not only that; Historically, unmarried people (widowed, divorced, or always single) were more likely to live with other people than to live on their own.

A study of living alone in 113 nations (discussed here) reported on the percentages of adults living alone in three different age groups: 25-29, 50-54, and 75-79. The oldest group included the greatest percentage of people living alone, by far, and the middle group, the fewest.

In the youngest group, men were more likely to live alone than women in nearly all 113 nations. One reason for this is that among people who marry for the first time, men are typically older than women. They are staying single longer.

In the oldest group, the pattern flips, and in the vast majority of countries, far more women than men live alone. One of the reasons for that is that women typically outlive men.

The patterns for the middle group are the least straightforward. Men are more likely to live alone, but the differences in living alone between men and women are smaller, and in some nations, more women live alone. Maybe because fewer people live alone in midlife, and maybe also because scholars have typically been far more interested in marriage and nuclear families than in single people, we know much less about patterns of living alone in midlife. That is starting to change. Earlier this year, a new report was issued, “Single and living alone in midlife: 2021,” by Corrine E. Wiborg of Bowling Green State University. The report focused on adults in the US

Living Alone in Midlife in the US

In the report, midlife was defined as ages 30 through 59. Single was defined as unmarried and not cohabiting. That definition includes fewer people than if single were defined simply as unmarried. The report did not discuss people “living apart together”—people who are married or in a committed romantic relationship who live apart. Also, data were not reported separately by different racial or ethnic groups. Research by University of Maryland sociologist Kris Marsh (discussed here and in a forthcoming book) shows that staying single and living alone can be a path into the Black middle class.

Here are the key findings from the report:

Homeownership can be a challenge for people who are single. Without a spouse, they typically have just their own income. Even apart from that, single people are financially disadvantaged in many ways, including by laws, policies, and practices that favor married people. Within the specific domain of housing, there are also indications that single women get a worse deal than they deserve on their mortgages.