With the Supreme Court’s decision to overturn Roe v. Wade, much of the news coverage has focused on whether or not states with so-called “trigger” laws outlawing abortion make exceptions in cases of rape or incest. Such exceptions have played a prominent role in abortion access arguments since the 1950s.

Unfortunately, a focus on rape and incident makes abortion access seem like an issue after victimization and a matter specific to sexual violence rather than other forms of intimate abuse. However, research shows that reproductive coercion is tangled up with intimate abuse, including ongoing and future victimization, making reproductive autonomy a central issue in work to end violence against women. Let’s take a look.

Since the 1990s, many cross-sectional studies have documented links between reproductive coercion and intimate partner abuse, including physical as well as sexual victimization. This means that reproductive coercion happens in the context of ongoing abusive relationships for many women with serious health consequences. For example, reproductive coercion is linked with problems ranging from sexually transmitted infections to psychological distress, such as depression and posttraumatic stress disorder symptoms. Intimate violence that continues through pregnancy as well as after the baby is born has consequences for maternal and neonatal care as well as child development.

Adding to this already fraught situation, researchers have more recently pointed out that reproductive coercion may portend future intimate violence.

This isn’t surprising. Consider, for example, that men who report removing condoms without their partners’ consent also endorse more severe sexual aggression and greater hostility to women compared to their peers. Greater hostility towards women is linked with violence against them.

Action to End Violence Against Women Has To Include Reproductive Autonomy

The fall of Roe v. Wade means that many state governments are getting into the business of forcing people to stay pregnant – a tactic referred to as reproductive coercion and understood as abuse when carried out by an intimate partner.

“Restricting access to reproductive health care–whether in the context of an intimate relationship, in a family system, or by the federal government–is reproductive coercion—a form of sexual violence. Full stop,” according to Heather McCauley, an associate professor in the School of Social Work at Michigan State University and expert in reproductive coercion. “Our research has demonstrated that reproductive coercion is largely about exerting power over and taking control of pregnant people’s bodies, rather than intentions regarding pregnancy or parenthood.”

Given links between reproductive coercion and intimate violence, abortion bans promise to worsen the awful problem of violence against women in the United States. As McCauley put it: “Overturning Roe v. Wade enshrines sexual violence into the fabric of our society and emboldens abusive partners to continue doing harm.”

When Roe was overturned, a woman was victimized by a current or former intimate partner, and another was sexually assaulted every ninety seconds. In turn, intimate violence harms victims and communities, diminishing all safety, opportunity, health, and dignity. This means that addressing violence against women is in all of our self-interests, as I describe in Every 90 Seconds: Our Common Cause Ending Violence against Women,

Ending violence against women requires the ways that it is tangled up with the issues that stoke our greatest passions – including abortion. This means that work to ensure women’s access to reproductive healthcare and autonomy to make health decisions has also to address violence against women. For example, screening for and intervening to stop reproductive coercion and intimate partner abuse.

And vice versa: efforts to end violence against women have to also include work to ensure women’s healthcare autonomy, including decisions about pregnancy and abortion. After all, abortion is essential healthcare, and access is a public health issue. As the American Psychological Association pointed out, denying women access to abortion promises to “exacerbate the mental health crisis America is already experiencing” as well as worsening other inequities. 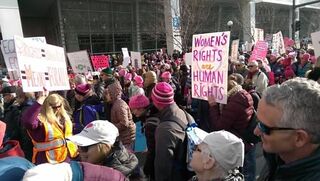 We each have a stake in ending violence against women. This means we also have a stake in ensuring women’s reproductive autonomy. Learning from other social movements, change is possible, but it will take each of us our shared interest in working together.