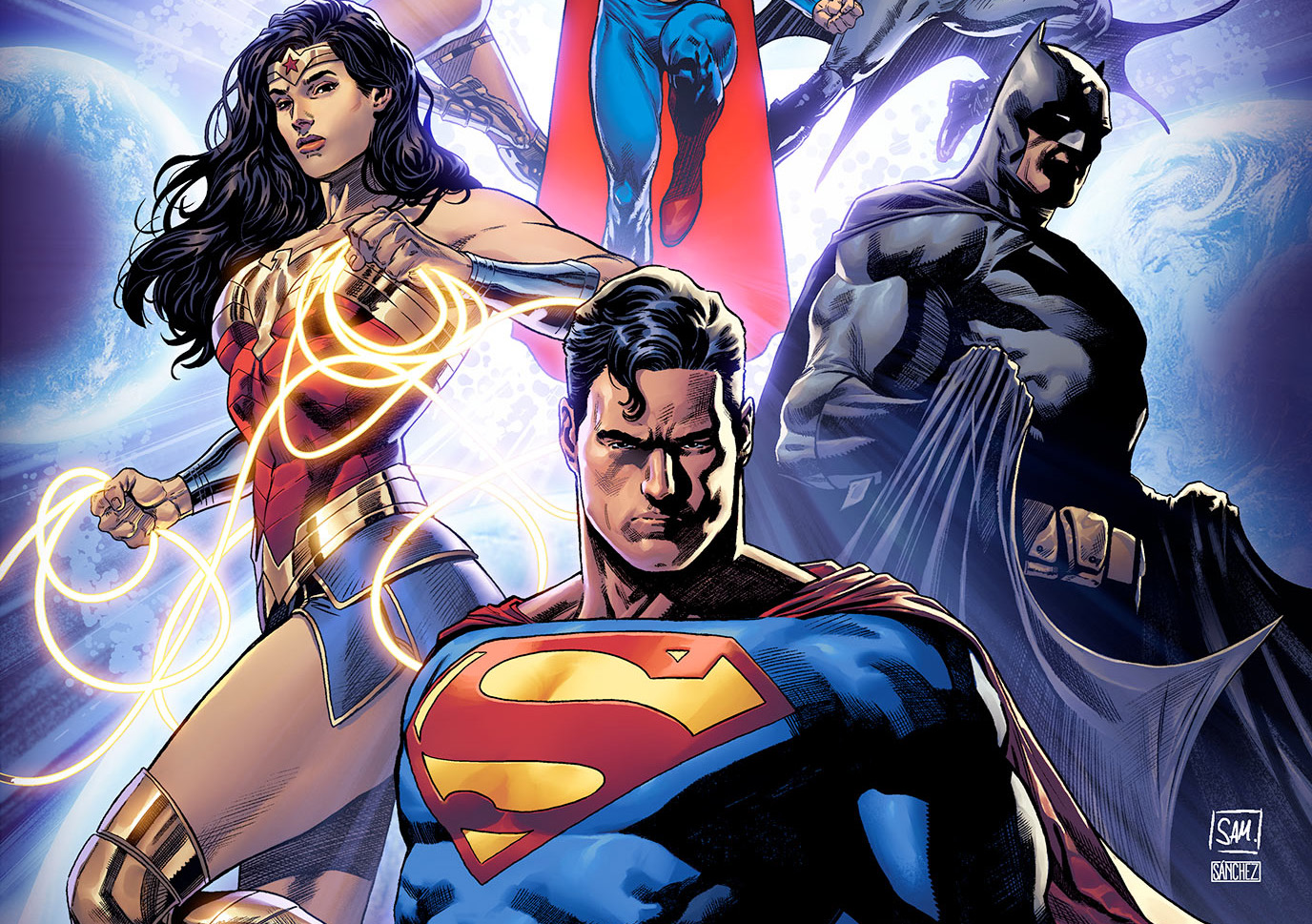 For the remainder of 2022, DC Comics will be dominated by the publisher’s most significant crossover for two years. That’s a big deal in anyone’s book, except the titans of the Justice League, whose books are conspicuously empty. The death of Earth’s mightiest superteam in Justice League # 75 is the starting point for Dark Crisis.

DC has become famous for its crises – gigantic, reality-shattering events that deliver massive crossovers and even bigger surprises. Like any good one, Dark Crisis poses an existential threat to the DC multiverse. Only this time, it’s more than a sequel to what came before. Dark Crisis has roots that connect the dots back to 1985’s Crisis on Infinite Earthsas explained in the Free Comic Book Day preview, Dark Crisis # 0.

Crisis on Infinite Earths was an inspired and phenomenally ambitious idea. An epic event that would not just create compelling moments and jaw-dropping cliff-hangers but also reset the DC multiverse. In 1985, DC had amassed about 50 years of continuous storytelling. Huge mythology had built up around iconic characters like Superman, Batman, and Wonder Woman that posed challenges for writers and readers.

The answer was a gigantic event that crossed history, Earths, and titles to provide an end and a new beginning. Writer Marv Wolfman and penciler George Pérez tested the limits of the comic page across 12 packed issues that saw heroes and villains join forces to stop the Anti-Monitor’s destruction of every Earth in the Multiverse on its march toward us.

DC magically turned its continuity problem into a huge opportunity. It played a pivotal role in the rise of the great comic crossover and was a key indicator and symptom of the arrival of the Modern Age of comics. A multiverse of multicolored kryptonite and the Last Son of Krypton’s strangely extended family would be cleared away. The characters we knew would be redrawn and refined for modern sensibilities as some ominous clouds appeared on the horizon with names like Watchmen, The Dark Knight Returns, and Sandman.

DC isn’t alone in crossover events that boost sales and promote titles, but it’s returned to this particular template several times. Each crisis promises to refresh comic lines and introduce new characters. With Dark CrisisDC has found a way to link them all together.

Fall of the Dark Crisis

Dark CrisisDC’s largest crossover event since Dark Nights: Death Metal, is pitched as a crisis to end them all. They may have been Infinite and Final before, but Dark Crisis will pan out differently.

As it starts with the fall of the Justice League, Dark Crisis begins more like a typical aftermath story arc. We’ll discover which heroes on Earth-0 will fill in for more familiar faces as they protect the multiverse from the dark forces of the villain Pariah.

Pariah debuted in Crisis on Infinite Earths and has become a staple for multiverse-threatening events, although his villainous turn is new. He was a brilliant scientist from an alternate dimension called Kell Mossa – like the Greek titan Prometheus, a warning about the consequences of too much knowledge. His successful attempts to see the creation of the universe led Crisis on Infinite Earth‘s big villain, Anti-Monitor, to destroy his Earth.

The cosmic foes’ opposite, the Monitor, saved Mossa, but with a catch. Renamed Pariah, he was doomed to travel the multiverse, witnessing the destruction of one Earth after another. Over the years, Pariah has left his guilt behind, endured death during Infinite Crisisresurrection during the non-Crisis Blackest Night arc, and a twisted resurrection during Flashpoint. It led him down a dark path, although Pariah and his army of familiar villains have been revealed to be a mere puppets for a greater evil that even closer to previous crises.

The Great Darkness is undoubtedly the ultimate evil of the DC Universe. It first appeared in the pages of Swamp Thing Volume 2in what looked like a speculative power grab during the culmination of Crisis on Infinite Earths. Dark Crisis confirms that this evil force was actually manipulating the Anti-Monitor behind the scenes and has not stopped encouraging crises since.

Can the Great Darkness really be that bad? As the darkness that sprung into existence when the Presence said, “Let there be light,” yes it can. After so many failed attempts to shape the multiverse to its design, Dark Crisis is the Great Darkness’ attempt to deal with the main threat once and for all: superheroes. It’s been a big build-up.

A perpetual state of crisis

You can not keep a good crisis down – there’s always room for one more, although the definition is strict. Not every DC crossover event or multiversal change is a crisis. Some emotional crises have concentrated on the morals of being a superhero, like Identity Crisis and Heroes in Crisis. The Convergence event that led to DC Rebirth and Doomsday Clockwhich installed Watchmen into the DC Universe, are important DC milestones that looked like crises, but they only enhanced the particular crisis they were anchored in.

Confused? Do not be. Here are seven key crises that have led up to the Dark Crisis and their effects on the DC Multiverse:

The original epic, universe-changing event that reset 50 years of DC continuity. A busy, convoluted story where exposition is dotted with jaw-dropping moments, and the Silver Age and Modern Age of Comics collided.

The result was a reminted DC Universe without the Multiverse it had nourished for over two decades. Few characters remembered the old multiverse, as familiar heroes received refreshed origins on New Earth.

The event that set the template for heroes to become villains. In the fallout from The Reign of the Supermen, legendary Green Lantern Hal Jordan fell under the influence of the great nemesis of the Guardians of the Universe Parallax. Deranged and all-powerful, the fallen hero set to remake the universe and correct past mistakes.

The result was a new fluid timeline and revised alternate universes. A new scale kept DC history relevant to current events. The Legion of Superheroes was rebooted, and many characters received updated origins during the Zero Month that followed.

After two decades and a soft reset, DC continuity had built up again. In-between crises, Superman had died, and Batman had been broken. In this sequel to the original crisis, creators Geoff Johns and Phil Jimenez turned the heroes of the initial crisis against reality as they set about remaking the multiverse to find the perfect Earth. At the center was another clash between the idyllic Golden and Silver Ages and the harsher Modern Age.

The result was an unstable new multiverse and the One Year Later time jump, filled in by the weekly series. 52 as continuity was reshaped and a Countdown started to…

Very much predicted by early reference to Infinite Crisis as the middle crisis, Final Crisis was masterminded by multiversal visionary Grant Morrison. Darkseid took a central role in this crisis as the New Gods fell and the God of Evil attempted to control reality.

The result was the end of the Monitors as New Earth’s place in the multiverse was reset.

Geoff Johns’ second crisis proved fundamental to Flash adaptations on the small and big screen. Barry Allen’s misadventure in the Speedforce and the history it distorts has become a catchword for alternate realities and time tampering in the DC multiverse.

The result was a radically and strictly drawn multiverse of 52 Earths and a continuity redefined through the launch of DC’s New 52.

A fresh and metallic reset after the rapid Crisis as Scott Snyder and Greg Capullo masterminded the Batman Who Laughs assault on the Multiverse. This darkest of Batmen, a Bruce Wayne from the Dark Multiverse who succumbed to a vicious form of Joker toxin, brought other Dark Knights to consume the Multiverse on behalf of the bat god Barbatos.

The result was a tear in the protective Source Wall that had kept the multiverse safe from whatever darkness lay beyond.

Snyder and Capullo returned to crossover epics after a brilliant stint on Justice League to complete the story. When an infected Earth falls to darkness and the Batman Who Laughs, the stage is set for the oddest crisis yet.

The result is New Earth removed from the center of the Multiverse and the hint of a mysterious balancing Elseworld that would herald the Infinite Frontier era.

With those crises out the way, you’re set for the Dark Crisis event that runs from May to December 2022. The question is whether the DC Multiverse is just as prepared.