Common toads, with their heavy-set bodies and short limbs, are regarded as typical terrestrial amphibians.

“There is no shortage of papers on common toads; they are a very well-studied species,” says Silviu Petrovan, a senior researcher at the University of Cambridge and trustee of the conservation organization Froglife. “Yet, they do something pretty mind-boggling and strange.”

Petrovan and his colleagues, using citizen science data and with support from the wildlife charity People’s Trust for Endangered Species, recently published a paper showing that common toads are in fact capable of climbing trees. How they get up there, and why they do so, remains a mystery.

The surprising discovery came about through collaborations with two major citizen science projects surveying tree-living mammals in Britain. It began when Petrovan learned that a surveyor with the National Dormouse Monitoring Program found a toad in a dormouse nest box.

“One record is interesting but a bit meaningless; however, if you think about the logistical problems with the individual getting there, it opens up more useful and interesting questions,” says Petrovan.

It occurred to Petrovan that although herpetologists were not looking for toads in trees, citizen scientists who work with tree-living mammals may have encountered more arboreal amphibians. Surveyors for the National Dormouse Monitoring Program are asked to record information on other mammals that may be present in nest boxes (such as mice or voles) but are not specifically asked about amphibians. Petrovan and his colleagues sent out a questionnaire to the surveyors regarding toads and other amphibians found in dormouse nest boxes.

The researchers also surveyed volunteers with the Bat Tree Habitat Key project, a citizen science initiative focusing on potential bat roosts in the UK, to see if anyone had found amphibians in tree cavities.

The results of these surveys indicated widespread tree usage by amphibians in England and Wales. And not just any amphibians; overwhelmingly, it was common toads found occupying nest boxes and tree cavities.

In total, volunteers surveying dormouse nest boxes and tree cavities used by bats reported finding over 50 common toads. Particularly remarkable is the height at which the toads were observed. Dormouse nest boxes are 1.5 meters (nearly 5 feet) off the ground, and one toad was found in a cavity 2.8 meters (9 feet) up a tree. 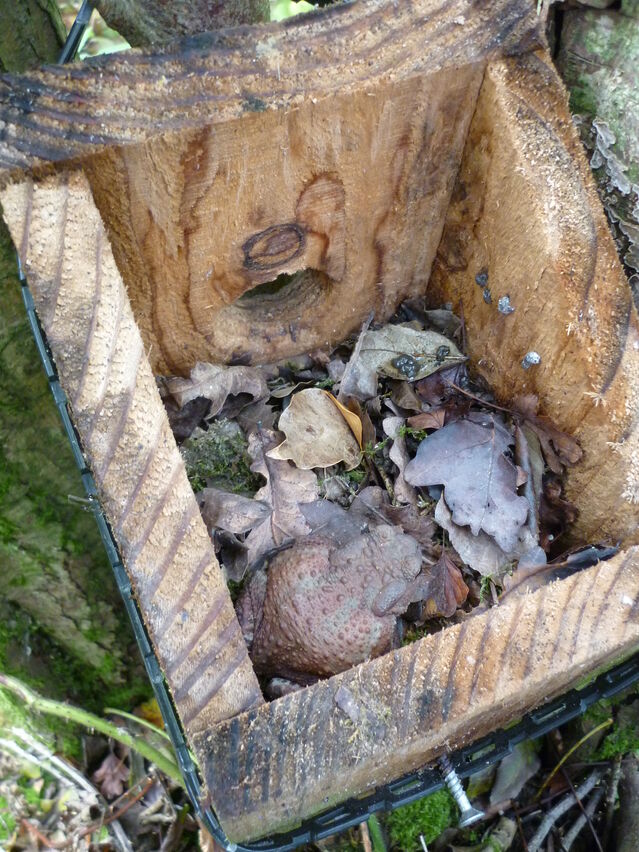 Toad in a dormouse nest box.

While 50 tree-climbing toads might not seem like a lot, the number is actually comparable to records of other animals known to use trees regularly, such as blue tits. And given that no one was specifically looking for toads in trees, it’s likely that their numbers are under-recorded. If this is true, Petrovan says, common toads could be found in up to one in every hundred trees in favorable habitats in the UK.

Why has this behavior gone unnoticed? It appears that common toads are specifically climbing trees to look for hollows or cavities in which to hunker down. The chances of encountering a toad in the act of climbing are probably small because they are more active at night and have effective camouflage. Once they have reached their destinations, the toads are safe from most prying eyes. (Checking inside tree cavities can be challenging; for instance, the data on bat roosts in this study was collected using endoscopes).

Petrovan says he and his colleagues do not know exactly how common or how important this behavior is for toads. However, for a toad — a stout, heavy amphibian with zero adaptations for climbing — to drag its body up a tree must take an enormous amount of energy.

“This suggests to me that the ecological relationship between toads and woodland is a lot deeper than we originally thought,” says Petrovan. “If sufficient individuals do it and spend a huge amount of time and effort doing it, there must be a benefit.

“And if there is a benefit, then, presumably if they are prevented from doing it due to the woodland being degraded or removed, there would be conservation implications.”

Previously, Petrovan and colleagues reported that common toads have declined by 68 percent on average over the last 30 years across the UK.

Older trees with hollows and cavities might represent an important ecological feature for toads. Protecting habitats with these features could benefit toads but more research is needed to understand the role of trees in toads’ lives. 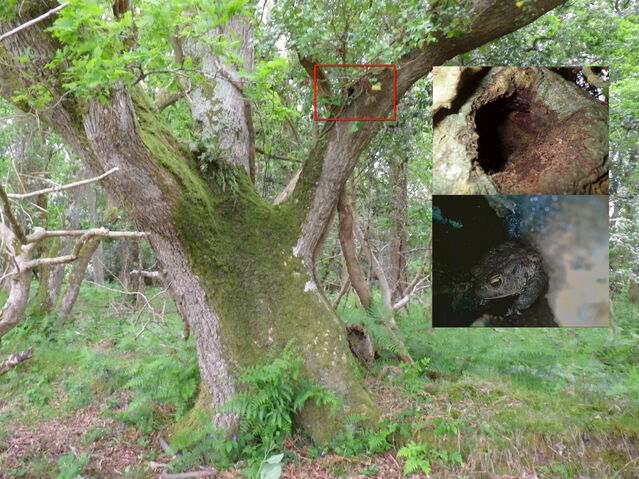 Position of a toad in a tree.

Why Did the Toad Climb the Tree?

According to Petrovan, the biggest remaining question is why toads climb trees and use nest boxes. Though he and his colleagues suggest several explanations, he emphasizes that they just don’t know yet.

It could be that toads are attracted to tree cavities and nest boxes because they provide a safe and damp place to rest or forage. These sites might also allow toads to get away from parasites, such as the toadfly, and predators, such as grass snakes.

Interestingly, the researchers did not record any observations of toads in trees from Scotland, where both toadfly and grass snakes are largely absent. Petrovan hopes that future research will investigate the hypothesis that toads climb trees more often in areas with predators and parasites by comparing sites in England and Scotland.

Petrovan says this study highlights the value of citizen science and data sharing. Without collaboration between conservation organizations representing different species, this behavior would have remained largely unknown to anyone outside of dormouse and bat surveyors.

“It’s not something that happens all the time,” says Petrovan. “But if you work in the right environment, at some point there is a reasonable chance that you will encounter a toad in a tree.”

The study also shows that there is always more to learn about wildlife. Even those species that we think we know well can surprise us, if we ask the right questions and look in the right places.