The MCU has been a giant in the superhero film industry for years, and ever since Phase One first began, Marvel has successfully introduced and developed an incredibly detailed cast of core characters beginning with the members of the Avengers. As the longest-serving original member of this team whose story is still being told, Thor has been around for a while and is set to star in his fourth solo film, Thor: Love and Thunder (arriving in theaters July 8th). The character and his films, however, have undergone quite a change over the years.

While the first two films in the Thor franchise, Thor (2011) and Thor: The Dark World (2013) set up a unique and solid tone for the Norse God of Thunder, the introduction of director Taika Waititi‘s new style in Thor: Ragnarok (2017) broke away from the Shakespearean tragedy style of storytelling that had been woven into Thor’s tale from the beginning. Ragnarok is an inspired, funny, and colorful new take on Thor as a character and his place in the new phase of the MCU, and this new light-hearted and quirky tone fits well with actors Chris Hemsworth and Tom Hiddleston as Thor and Loki. It is also likely that the fourth film, Thor: Love and Thunder, will continue the colorful and wacky new style. This tonal shift in the middle of the four films is a strange and notable choice, and it begs the question: Why the change? Was there anything wrong with how Thor has been portrayed in the past?

RELATED: Failure Has Made Thor the MCU’s Mightiest Hero

Looking back on the first Thor film, it is easy to point to some of the more dramatic and cheesy moments to scrutinize them and contrast these early films to the more colorful and humor-focused newer ones. However, even though the original dark and brooding tone was scrapped in favor of humor and brevity, Thor’s original story structure did benefit both the Thor film franchise and the MCU as a whole. The first few films center mostly around the relationship between Thor and Loki, which is a sibling rivalry for the ages. Family angst is a goldmine when it comes to stories built on drama, as evidenced by the original Norse myths (with all the terrible things MCU Loki has done, at least the story of Baldur has not been brought up – yet). Thor does not just adhere to this trope – it embraces it wholeheartedly. Arguments among brothers can be destructive, but when both children are gods, immaturity can last for millennia. The writers and director (Kenneth Branagh) of Thor chose to apply a serious and mystical quality to this strange fish-out-of-water story (though the trademark MCU humor is still there, the story very much centers around the larger-than-life conflict between the two brothers).

This modern version of Thor ends up looking quite different from the old figures of Norse mythology, with interactions with the modern human world and shocks of color and humor being several important changes. But one aspect of many mythological stories involving Thor and / or Loki stayed the same after the jump from legend to Marvel: the shape of tragic storytelling. The first Thor film is a starting point for the character, as it serves as both a coming-of-age story and a superhero origin story all wrapped into one. The Thor franchise, beginning here at the very first film, follows Thor’s journey from a young god who takes himself too seriously to a wiser one who is willing to laugh at himself and learn from his mistakes; the tonal change in the third (and probably the fourth) film reflects this shift in attitude, making the change a strange but reasonable decision for Thor’s personal growth.

In his debut film, Thor realizes the burden of responsibility and the weight of an entire kingdom (sometimes even more than one realm) on his shoulders, while Loki unravels as he deals with the revelation of his heritage. Not only has Loki been in Thor’s shadow since they were children, but he also learned that he was a spoil of war and could never become King. Throughout his descent into villainy, not just in the Thor franchise but in the MCU as a whole, Loki lashes out due to this false belief that he needs to prove that he is worthy of Asgard and of Odin (Anthony Hopkins).

An alternate version of Loki even gets his own miniseries on Disney + to explore how his trauma affected his psychology – and how, even before he realized the truth of his heritage, favoritism for Thor cast a large shadow over his life and caused him to develop narcissistic tendencies to protect himself. Though Loki develops the trickster god’s characterization and possible rehabilitation, Thor introduces the beginning of Loki’s villainy in the form of melodramatic theater to drive the point home. His heartbroken monologue to Odin upon finding out that he is Laufey’s (Colm Feore) son, and a frost giant, is reminiscent of Shakespearean dialogue – despite its dramatic flair, the speech is startling in its sincerity, the tension heightened by the melodramatic tone that could easily have ruined the scene had Hiddleston not given such a heartfelt and believable. performance. In the end, both sons attempt to prove to Odin that they are worthy of the throne. 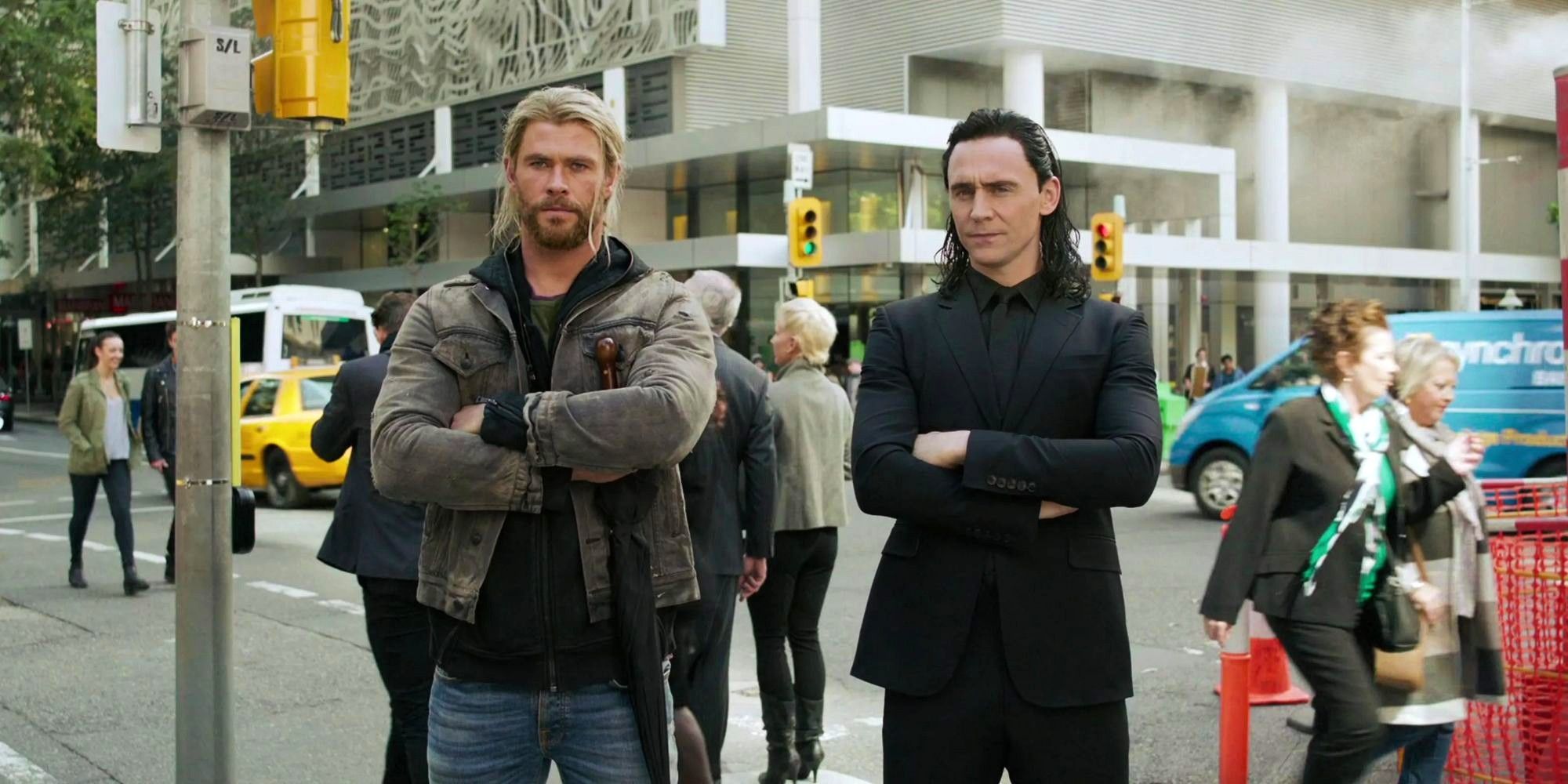 As Thor learns his lesson on responsibility and empathy, as well as the dangers of recklessness, Loki leans into his role as an irresponsible and unapologetic villain who leaves destruction in his wake. Thor wins the day and emerges triumphant, but he loses his brother; a tragic ending. And even though Thor learns his lesson, the cost of that lesson means losing his only connection to Earth and the one he loves. The Dark World continues the tragedy involving the brothers and adds an element of danger to Thor’s love interest, Jane Foster (Natalie Portman). While Thor develops a deeper relationship with Jane, he must risk losing her and falling victim to more of Loki’s schemes in order to free her of the Aether, which is a coveted power source for Malekith (Christopher Eccleston) and the Dark Elves. It is worth noting that in no Thor film does the prince of Asgard escape without some sort of loss. With every triumph comes a high cost. In The Dark WorldThor loses his mother, Frigga (Rene Russo), which sends Loki into a grief-stricken spiral as well.

As a side note, while Loki has a tendency to fake his own death, he is able to fool Thor every single time. At the end of the first film, he falls into the abyss of space and is presumed dead. At the end of this second installment, he fakes being killed by the Dark Elves so that he can more easily usurp the Asgardian throne. Even though he isn’t technically gone, Thor still mourns the loss of his brother and will continue to do so throughout the MCU, whether Loki is scheming or truly dead (and at the beginning of Avengers: Infinity War, Loki seems to be lost to Thor for good). All this is to say that, just in any sort of tragedy, loss is gutting and devastating, and every small victory is won with blood. The Thor films are no different, even in the second portion of the four-film (so far) journey.

The tone of these first two films matches the subject matter. Dark, ominous (and, in the first film, full of Dutch angles), Thor’s beginnings are somber with a ray of hope. Shakespearean tragedies are known for their melodrama (in fact, for many, that is often their draw), and the first stages of Thor’s story are not lacking in this department. Early Thor speaks with flowery language, the writing is unapologetically and fittingly dramatic, and the actors give the performances their all. Such a combination makes for a fun and addictively medieval ride.

Thor’s early style also contrasted with the rest of the MCU characters at the time. Standing among Iron Man (Robert Downey Jr.), Captain America (Chris Evans), the Hulk (Mark Ruffalo), Black Widow (Scarlet Johansson), and Hawkeye (Jeremy Renner), Thor is the only character not of this planet, his language stands out from the rest of the team, and he is the only Avenger who uses magic. Add that to the fact that he is royalty and that his personal family angst can cause thousands of deaths if handled poorly, and Thor’s more melodramatic and tragic tone is a much-needed contrast to the rest of the Avengers. In the early days of the MCU, Thor’s melodramatic storytelling style wasn’t just flamboyant – it was refreshing.

The MCU is moving away from the classic tragedy style of storytelling and into a more colorful and experimental style for the Asgardian prince. It makes sense because, as the MCU fills up with more magical and somber characters (Dr. Strange, Scarlet Witch) and leans far more into the humor of the superhero world than ever before, Thor’s tone is changing with the times. Even Lokiwhile still dark and introspective, carries a modern twist as Loki teams up with the TVA – a god and a police force paired together is a strange combination, and the storyline feels more futuristic than medieval, complete with more modern speech patterns in the dialogue. .

The tragic losses are still present with these new changes; Ragnarok saw Asgard’s fall and its people displaced, as well as Odin’s death. But the setting is far more colorful, funny, and all-around light-hearted in the unique quirky style that can only come from the talent of Taika Waititi. It is a reasonable assumption that Love and Thunder will follow a similar trend, and its introduction to more prominent female characters also may signify a shift away from the more traditional melodrama formula: instead of the barely-present Sif (Jaimie Alexander), Ragnarok introduced Valkyrie (Tessa Thompson), and Thor: Love and Thunder will see the return of Jane Foster, this time as a potential rival for Mjollnir’s power .. Add to that the inclusion of still more modern-sounding dialogue and circumstances, and Thor has found himself a long way from old Asgard. He has gone from throne-bound god to space viking, and yet, somehow, the journey still makes sense.

The MCU’s overall change in tone, as well as Waititi’s contributions to Thor’s story, are not negative aspects by any means – they add a lot to Thor’s journey and keep his story light-hearted in the face of unspeakable loss. But, Thor’s early days should be appreciated as well. The ideas of worthiness, responsibility, tragedy, loss, grief, and drama are all ingrained in Thor’s character from the beginning, and he never could have gotten this far along in his journey and character growth if he hadn’t started in a melodramatic place. .

It is important to remember where a character began their journey in order to properly understand where their journey (eventually) ends. Without the Shakespearean tone and hyper-dramatic elements, Thor would not have stood out so uniquely among the colorful titles of the early MCU, and though the tone shift is a welcome change, the tragedy and melodrama laid the groundwork for Thor’s beginnings and should not go overlooked. Despite the Thor franchise undergoing a tremendous change in tone, color, setting, and speech, the prince of Asgard remains a refreshing pillar of the MCU – all because of his flair for the dramatic.

Check out more mighty stories about ‘Thor: Love and Thunder’:

First ‘Thor: Love and Thunder’ Reactions Call It a Bright Spot and the Best of Phase 4