I recently read a riveting book called ‘I Can’t Watch Anymore’: The Case for Dropping Equestrian from the Olympic Games and an essay titled, “Won’t Somebody Think About the Horses?” by Danish journalist Julie Taylor, and wanted to know more about her and countless other peoples’ concerns about the ongoing psychological and physical abuse to which sentient and deeply emotional competition horses are subjected in equestrian sports.

My interest was further stimulated by reading a piece called “French Parliament Calls for Horse Welfare Overhaul at Paris 2024” because of accidents that marred equestrian events at the 2021 Tokyo Olympic games. (The full report in English can be seen here.) These accidents—a horse named Jet Set having to be euthanized after the cross-country event, Saint Boy, a pentathalon horse, being whipped and punched by his trainer, and Kilkenny suffering from a bloody nose that was ignored by his rider and the International Equestrian Federation (FEI) jury—provoked global public and media outrage by horse enthusiasts and many others, and some groups called for a ban of equestrian events at the Olympic Games. There were also significant equine welfare concerns about the 2016 Olympics held in Rio de Janeiro.

I also often wonder why people who say they love horses allow them to be routinely mistreated, and I learned that many people who enjoy watching equestrian sports and who love horses do not know about what happens behind the scenes of equine sport. When I asked a few people about this and how they dealt with their cognitive dissonance about horse abuse and being entertained by these highly sensitive sentient beings, they told me they didn’t experience any dissonance because they didn’t know how sport horses were treated off-stage, a view supported by a recent poll.1

I’m pleased Julie could answer a few questions about her landmark book that carefully explains who horses are and the compassion they need to live high-quality lives.

Marc Bekoff: Why did you write ‘I Can’t Watch Anymore’?

Julie Taylor: I wanted to provide the International Olympic Committee (IOC) with the arguments it needed to discontinue equestrian events from the Olympic Games. That has been in the cards for ages but for some reason, it hasn’t happened yet.

There is so much evidence now that horses who perform at an international level experience pain, stress, and injuries because of it. It’s just not sustainable. People assume that because horses take part in the Olympic Games, they are treated well. That is unfortunately not the case, and I wanted the IOC and the rest of the world to know. 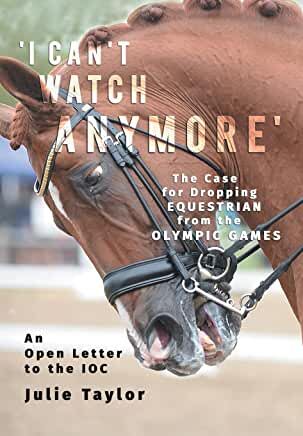 MB: Who is your intended audience?

JT: It was important to me to write a book which non-equestrians could easily understand because its primary audience is the International Olympic Committee, most of which is composed of people with little or no knowledge of horse sport.

A lot of the time, when horses need the outside world to intervene on their behalf, equestrians manage to shut down the conversation by using jargon and making critics feel as if they don’t really understand what’s going on. My aim with I Can’t Watch Anymore was to cut through that smokescreen and lay bare what is really happening. I also wanted to empower the equestrian insiders who know that something is wrong but are unsure of themselves or afraid to speak up.

MB: What are some of your major messages?

JT: The horse welfare debate within equestrian sport is mainly centered around human interests. How can we keep exploiting horses for sport without being seen by the outside world as animal abusers? That discussion needs turning upside down if we are really being serious about putting horse welfare first.

Begin with the horses. What kind of animal is a horse? A social animal, a grazing animal, a curious animal. What then needs to be in place for a horse to live a meaningful life? A bonded social group, the possibility to roam, graze, and explore together. These criteria are difficult to fulfill in domesticity even before you start thinking about using a horse for sport.

Only once you get there is it relevant to ask yourself what you can then reasonably demand from a horse without detracting from their wellbeing. The answer is: not a lot. That is why international performance horses so often rely on drugs to function. That’s why coercive methods and equipment must be allowed at the Olympic Games. And that is why studies show horses display symptoms of pain and stress every few seconds when performing in elite equestrian sport. It simply isn’t possible to harmlessly use horses the way the equestrian federations are trying to use them today. The industry is collectively in denial, so intervention must come from without.

MB: How does your book differ from others that are concerned with some of the same general topics?

JT: Efforts to get horses out of the Olympic Games usually plead for horse welfare or animal rights. I wanted to shape my argument more like a sales pitch, so I tried to think about the matter from the point of view of the IOC. What does it want? The IOC wants Olympic sports to be global, so I show that equestrian disciplines are not. The IOC is keen on clean sport, so I point out the FEI’s de-regulation of painkillers, steroid hormones, and performance-enhancing surgery. The IOC has expressed its commitment to athlete safety, so I demonstrate how the FEI endangers riders and horses to stay in the Olympic Games.

The aim was to appeal to the IOC members’ common sense, not their good hearts. I think that’s what makes my approach novel.

MB: Are you hopeful that as people learn more about the amazing lives of horses, they will treat them with more respect and dignity?

JT: Very much. Sometimes equestrians are frightened when they begin to discover what a poor fit horses really are for horse sport. People lack the imagination to envisage an alternative future for the coexistence of horses and humans. To many equestrians, horses exist because of horse sport and so when you talk about dialing back horse sport, they see that as a threat to the existence of horses.

The cure for this is seeing horses who live naturally in their family or bachelor bands without the interference of humans. And seeing horses and humans living together in domestic settings free from exploitation. That is very powerful.