With the understanding that laughter is a vocal affirmation of mutual vulnerability, and reflecting on how the spontaneous highlighting of someone’s shortcomings is a critical part of informal humor, the task of now comprehending formal humor becomes relatively straightforward. The only difference between informal and formal humor is the greater degree of planning and effort one invests in the latter’s creation and delivery, and the length one goes to in acquiring an audience.

Successful attempts at formal humor share certain attributes. They tend to reference a character or characters with which the audience is familiar or to which they can relate. They either exaggerate acknowledged vulnerabilities or the effect that relatively “normal” traits or behaviors have on one’s status. They foster a safe environment in which to express our feelings of sympathy, disdain, or both. Successful attempts at formal humor sanction a broadened definition of vulnerability by means of distancing. Those who take pains to perform such feats in a significant way can rightly be called humorists, be they amateur or professional.

In this and the next couple posts, I’ll touch on some of the most common ways in which individuals engage in formal humour. I will rely heavily upon the latter half of Chapter Four of my book, Why We Laugh: A New Understanding,

I can only infer this, but it would seem a good bet that history’s earliest humorists were probably pranksters. Pranks (and practical jokes) are the intentional creation of circumstances that highlight the vulnerability of one or more persons (the targets) for the amusement of the prankster and others. Pranks are often, but not exclusively, physical forms of humor, though they inevitably involve emotional, cognitive, and social consequences to the target. They tend to be “executed” rather than simply communicated, as in verbal or written forms.

Pranks can be as simple as walking up from behind and starting someone. Only slightly more sophisticated is hiding someone’s unattended plate of food. Pranks often include props, such as a plastic spider, dribble glass, or hand buzzer.

Tricksters are similar to pranksters in the way they set up situations and play off one or a few subjects, but rather than emphasizing physical vulnerability, they work more from the cognitive angle (again, other vulnerabilities inevitably come into play). A “magic” trick, for example, could include a sleight-of-hand maneuver that appears to turn a red handkerchief into a blue one. Such actions compel one to try and determine the means by which the trick is accomplished. Failure to make such a determination highlights cognitive deficiencies and solicits “Self-Lifting Laughter” from the individuals being tricked, Lifting Laughter from benevolent cohorts, or Lowering Laughter from critics. (Successful resolution by the target or audience can also prompt the same reaction, only this time for the trickster’s shortcomings.)

The audience understands that the actions of the trickster are not genuine tests of the subject’s intelligence, making his or her failure less consequential. This is an example of the distancing effect afforded by information. 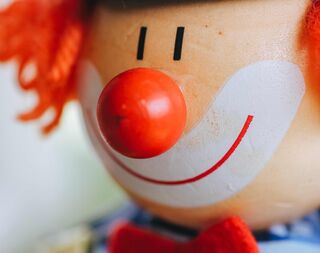 Individuals who adopt alternate persons and carry out pranks, tricks, mock aggression, and self-effacing behavior for the amusement of others are typically referred to as clowns or jesters. Clowns (and here I refer to the benevolent variety) adopt qualities to depersonalize both the source of the antics and, because their humorous exploits are sometimes self-directed or aimed at other clowns, the target as well.

Clown characters often evoke sympathy, downplay their ability to threaten others, and maximize their own physical vulnerability. They may be clumsy in their movements, given childlike or disproportionate physical features, or appear poor and destitute. Their facial expressions and mannerisms are often exaggerated, inviting their audience to focus on emotional signals. And their projected intellectual, emotional, and physical aptitude is typically well below average for adults, more closely approximating that of young children—an audience of special import to most clowns.

These traits permit clowns to carry out acts of mock violence, pranks, and other foolery in a way that minimizes the inference of deficiency (ie, serious injury) and maximizes that of vulnerability. Also important is their tendency to perform in a social environment (eg, parties and circuses) where amusement is understood to be the desired end.

In centuries past, jesters a mocking style of humor, one often directed at powerful figures. In real life, they may have had a particularly limited social standing that permitted them to point out or exaggerate the shortcomings of dominant figures without being considered menacing enough to warrant retaliation. If a reprisal was tendered, it would have been moderated such that the jester received sympathy from the audience. Jesters may have, for example, attacked the target’s sexuality, virility, intelligence, or bravery. The audience’s Lowering Laughter expressed a feeling of greater equality with the targets of the humour. Their Lifting Laughter would have either buoyed the target or conveyed sympathy and solidarity with the jester’s perilous proclamations.

In my next post, I’ll look at some of the techniques used by storytellers, joke tellers, and cartoonists to create humour.