Free will is a very messy concept that humans have battled with for centuries. Maybe we all go through phases (and not just when we’re 16) of feeling like we need to know, in what sense, if any, we’re actually choosing anything.

It’s a concept I’ve broached before in this blog, in the second half of a two-parter called “Are you more than your body?” (spoiler alert: no). It’s also the subject of one of the trickiest chapters in the textbook on consciousness my mother and I published in 2018, Consciousness: An Introduction (3rd ed.). And it came up in a great email exchange I’ve been having this year with a Canadian philosopher friend David Egan.

This was one of those threads in which no one replies quickly, but an amazing amount of ground gets covered. I wrote to him because I’d just read a great article of his on how to be anxious. In the article, he suggested a game of “Why?” and I played it with the starting point: “What was I doing at this time yesterday?” I consulted my daily planning document for the first answer. I kept asking “why?” for as long as I could and ended up deep in evolutionary imperatives (David said this was cheating), which led straight into free will and agency.

They often justify the need for the as-if stance by gesturing ominously towards all kinds of social breakdown if free will were abandoned (the justice system wouldn’t work, they say, or people just wouldn’t cope with the shock). But they sometimes also make it a bit more concrete and more personal. They say things like what David said:

I might conclude that I’m just a congeries [great new word for me] of biological drives without any free will. But once I’ve reached that conclusion, I still have to decide what to eat for lunch. I can’t just sit back and see what the biology will decide on.

They say things like what the famous philosopher John Searle said. He’s quoted here by scientist Susan Greenfield, in an interview with Sue Blackmore, published in Blackmore’s 2005 book, Conversations on Consciousness,

Blackmore: Do you have free will?

Greenfield: That is one of the most interesting questions and one that I keep coming back to each time. I’m not such a fan of Searle’s, but I’m quoting him a lot: he said that when he goes into a restaurant and orders a hamburger, he doesn’t say, “Well, I’m a determinist, I wonder what my genes are going to order.”

Blackmore: I do. You’re right that Searle doesn’t do that, but when I go in a restaurant, I think, “Ooh, how interesting, here’s the menu, I wonder what she’ll choose”; so it is possible to do that. But what do you do? 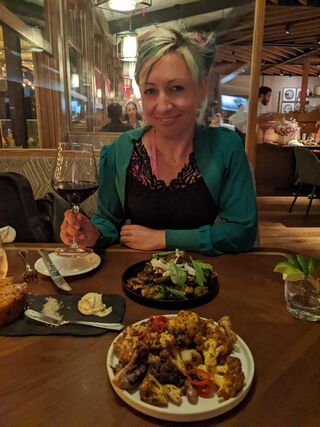 David was struck by the idea of ​​adopting a perspective that isn’t at all first-person in the usual sense: more like an observer stance on yourself, similar to what meditation practice often involves.

We went on to discuss whether free will is a red herring (his view) and what it really means to accept that we’re nothing but biological organisms.* In April, Blackmore and I went to the big annual American consciousness conference at a beautiful desert resort hotel in Tucson. There, we gave a double-act talk on “how and why to teach consciousness” (I did the sensible bits, and Sue did the fun demos; it’s the first 30 minutes here if you want to watch). One thing we did was try to help instructors help students throw their intuitions into question, and my emails with David had reminded me to include a bit on the restaurant game.

We realized afterwards that we had rather different ideas about how to actually play. The way I described the restaurant game was “go to a restaurant and don’t order […] try to not choose something off the menu and see what happens.” This didn’t make sense to Sue, who said her version is “go to a restaurant and wait and see what gets ordered.” I put it the way I did because, for me, the easiest way to play is if I start it off by forbidding myself from actually choosing something off the menu: I have to put that active brake on the usual sequence so that something else can happen. Maybe because she’s done a lot more meditation than I have, Sue is able to jump directly to the “I wonder what she’ll choose” stance.

From either starting point, what happens? Well, find out for yourself by playing the next time you have the chance. If you’re anything like me, the “something else” that happens will look, on the surface, a lot like what would have happened without the game: A meal will get ordered. The menu will get looked at, because it’s there, and relative tastinesses will get weighed up, and maybe money or ethics or image will factor in, too.

The interesting thing is how different it feels from usual: It feels a lot less like it’s me doing it. It’s all kind of at one remove. By the end, a process has played itself out, and I am somewhere around here too. The game-playing allows me a glimpse into the fact that this is how it always is: There wasn’t ever an “I” who was going to have to choose; it was only ever the whole complicated system that was choosing. So, given some initial disabling mechanism, it is in fact possible for “me” to “sit back” and let it all take care of itself, just like it would have anyway but with less self-important “self-ness” getting in the way.

In the second part of this post, I’ll explore options for playing responsibly and constructively if disordered eating is your current context.