Part I of II

Take a moment to consider the following experiences. For each one, ask yourself, Have I had an experience like that? And if so, was it ever a secret? Even if you have discussed the experience with someone, if you still intend to keep it from someone else, then it would still count as a secret.

• Hurt another person (emotionally or physically).

• Illegal drug use, or abuse of a legal drug (alcohol, painkillers).

• Habit or addiction ( but not involving drugs).

• Theft (any kind of taking without asking).

• Something illegal (other than drugs or theft).

• A traumatic experience (other than the above).

• A violation of someone’s trust (other than by a lie).

• Romantic discontent ( being unhappy in a relationship).

• Extra-relational thoughts (thoughts about having relations with another person while in a relationship).

• Emotional indelity (having an inappropriate emotional connection with someone, engaging in something intimate other than sex).

• In a relationship with someone who is cheating on someone else to be with you.

• Physical discontent (dislike of appearance or something physical about yourself).

• Inappropriate behavior at work or school (or lying to get hired or accepted).

• Poor performance at work or school.

• Profession, work discontent (unhappy with your situation at work or school).

• A planned surprise for someone (other than a marriage proposal).

• A hidden hobby or possession.

• A hidden current (or past) relationship.

• Sexual behavior (other than sexual orientation).

• A hidden preference (or non-preference) for something.

• Finances (spending, amount of money you have).

• A hidden current (or past) employment or school activity.

• An ambition, plan, or goal for yourself.

• Unusual or counter normative behavior (unrelated to the above).

• A speciﬁc story you keep secret (unrelated to the above).

These are the most common types of secrets that people keep—38 in total. These categories come from a survey I conducted of 2,000 people living in the United States that simply asked: What is a secret that you are currently keeping?

There were a few distinctions that our participants cared about, which we respected when making the list. For example, the difference between so-called emotional indelity and sexual indelity was clearly important to the people with the secret; the list makes this distinction. Likewise, illegal drug use could have been lumped with other illegal activity, but our participants were telling us that drug use was the more pertinent issue at hand, not whether it was legal or not. And theft, which we broadly deﬁne as taking without asking, was often seen as its own category: maybe you stole something as a child once, or you “borrowed” something knowing that you would never return it (I’ll admit here to both , helping myself to my brother’s Halloween candy and a friend’s pair of socks). Many of these secrets deal with relationships and sex, a theme we’ll see again and again. Others deal with our ambitions, our careers, our knowledges. Still, others lay bare our shames and embarrassments.

When my colleagues and I use this list in our studies, we provide examples of what we mean by “a violation of someone’s trust” (snooping on someone, revealing others’ information without their knowledge or consent, breaking or losing something that belongs to someone without telling). Likewise, for “romantic desire,” we provide a few examples so that our participants know what we have in mind (having a crush on someone, being in love with someone, wanting relations with a speciﬁc person). For the mental health category, we also give examples (fears, anxieties, depression, mental disorders, eating disorders).

I’ve shared this list with more than 50,000 research participants living across the globe. On average, they indicate having had 21 of the 38 experiences, 13 of which they keep secret. And 97 percent of my participants say they currently have at least one of the secrets from the list. (These numbers primarily reﬂect my American participants, I and that secrets affect us in similar ways, wherever we’re from.)

Next, about half of my participants report having a family secret, a secret ambition, or secret “extra-relational thoughts” (deﬁned as having thoughts about relations with another person while already in a relationship). Former president Jimmy Carter once shocked the nation with colorful language, admitting to having this very secret in an interview with Playboy during his presidential campaign, saying, “I’ve looked on a lot of women with lust. I’ve committed adultery in my heart many times.”

For example, 36 percent of all my participants say they have a secret about cheating at work or school. Among those who have ever cheated at work or school, however, most keep it secret from at least some people (69 percent). 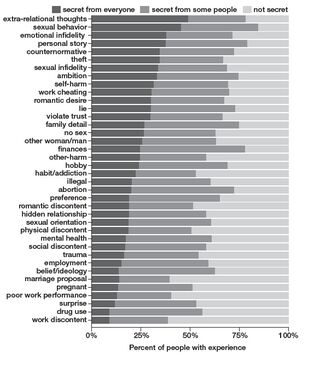 Having a secret about extra-relational thoughts is more common (50 percent) than having a secret emotional indelity (34 percent) or a secret sexual indelity (21 percent). This is primarily because, whether they keep it secret or not, more people have the rst experience (65 percent), than either of the latter two (48 percent and 31 percent, respectively). But also, among those with the experience, extra-relational thoughts are more frequently kept secret (78 percent), compared to emotional indelity (68 percent) and sexual indelity (71 percent).

The least commonly kept secrets include sexual orientation (12 percent), pregnancy (12 percent), a marriage proposal (10 percent), and abortion (9 percent). Relative to all the other secrets on the list, fewer people in my sample currently have these secrets.

Abortion is the least common experience on the list: 17 percent of the women in my data report having had an abortion, which is consistent with the national average. Among those with this experience, however, most keep it a secret from at least some people (72 percent).

Being pregnant or planning to propose marriage to your partner are less common secrets as well, but for a different reason. These secrets (along with other surprises) can only be kept for so long, so fewer people have these secrets at any given time. These more positive secrets are also kept for different reasons than many other types of secrets.

While all secrets share an element of intention, that intention need not apply to all situations or people. Some secrets you keep entirely to yourself, and others you’ve shared with at least one person but still keep from others. And so, you could have many secrets, but very few that you keep entirely to yourself. On average, I nd people concurrently have ve secrets they’ve never told anyone about (a “complete secret”) and eight more secrets they have discussed with at least one person but still intend to keep from others (a “conﬁded secret”) . This is where the average total of thirtyteen secrets comes from.

Some secrets are more frequently conﬁded than others. For example, among people who say they have a detail about advances that one might keep secret, 53 percent keep it secret but have also conﬁded in someone, and 24 percent keep it entirely to themselves (the remainder do not keep it secret). Compare these numbers to those around “extra-relational thoughts.” Among people who’ve had romantic or sexual thoughts about another person outside of their relationship, only 28 percent conﬁde in someone about having this secret, and 49 percent keep it entirely to themselves. Conding in others usually brings benefits, but not always.

When I say that people on average have 13 secrets from the list at any given time, you should take that to be an underestimate, as what this count really reﬂects is the number of categories of secrets people have. You could have two or more secrets that fall into the same category, especially for those that are broad, such as nances, sexual behavior, violating someone’s trust, or doing something illegal.

You might be wondering how else these secrets compare to each other. Are some more harmful than others? We can’t answer that question just yet. To do so, we need some way to compare the secrets to each other, some rules to hold them up against.

The list of secrets I’ve shared with you won’t include every single secret you have, as secrets can be about anything. But the list is fairly comprehensive. When I ask people to simply tell me about a secret they are keeping, 92 percent of the time it ts into one of the 38 categories from our list. This means that we are not so alone in the secrets we keep, despite how isolating the experience of secrecy can feel. Far from being what makes us different from others, secrecy is what we have in common.

Part I of II