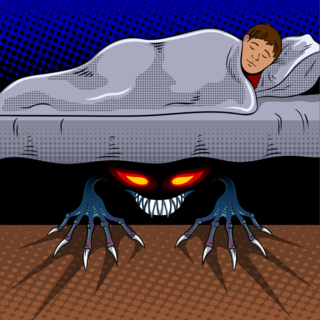 The monster under the bed.

The reason it’s so common for young children to be afraid of the dark is that they don’t feel they can protect themselves. And their sense of vulnerability, which is heightened at night, intimately relates to their limited ability to distinguish appearance from reality.

So if in the dark shadows of their bedroom, a youngster sees what looks like a monster lurking next to their dresser, night table lamp, or under their bed, they’re susceptible to experiencing terror. And even if they need to empty their bladder, they may fear that a monster stealthily concealing itself beneath their bed could take hold of their legs, hurl them to the floor, and hurt them.

So the only safe thing to do might be to tolerate the pressure and wait till sunrise to relieve themselves—both of their physical discomfort and their enduring anxiety.

What’s important to realize is that a child’s fearsome imagination alone can scare them. And what if their parents threatened them by repeatedly informing them that if they were bad, the bogeyman would get them? Or what if there were a monster in any of the fairy tales read to them (which they were shown alarming pictures of)? Would that, too, be enough for them to develop a shocking reality of such evil spirits?

So, what happens to these mysterious monsters once you grow up?

At some point, we all grow out of such primitive perceptions. But do we really? Is it not possible that if we still harbor lingering insecurities or a sense of weakness generally, these unwelcome monsters have sneakily transported themselves from under our beds to inside our heads?

The fact is that when you’re afflicted with self-doubt and a vacillating self-image, you’re subject to a destabilizing nervousness linking back to childhood.

Just below conscious awareness, you might be telling yourself that you’re not good enough, or that you’re unlikable, or that all your successes were merely good fortune, and that others, sooner or later, will recognize you as the imposter you are. And this prevailing uneasiness can hold you back in a variety of ways.

All your defense mechanisms can be seen as originating from the urgent need to moderate your anxieties. After all, feeling completely out of control is extremely stressful, representing the very apex of personal vulnerability. So, depending on the circumstances that prevented you from escaping your childhood insecurities, you may:

So what’s the remedy that will allow you to face your internal monsters and remove their venom?

It’s crucial to become aware that your defenses (however maladaptive in the present) were generated during childhood. And back then, they may have been absolutely necessary. Otherwise, you might not have been able to cope at all with the situations that once filled you with dread or trepidation.

Consequently, you need to learn “How to Talk to—and Tame—Your Outdated Defenses” (the title of a previous post I wrote about freeing yourself from their grip).

So here are some suggestions for beginning this remedial process:

Whether they relate to fighting, fleeing, or freezing, you want to work with these defenses rather than vigorously oppose them. For they did keep you from feeling so overwhelmed that without their assistance, you couldn’t even function minimally.

If you see yourself as a fraud, you might try some self dis-identification, pretending you’re someone else examining your personality, gifts, and aptitudes. Would they totally discredit you as an imposter? And if till now you’ve underachieved, it may well be because of your pessimistic self-regard—vs. what’s realistically possible once you grow your confidence and determinedly “go for it.”

You might then have deduced you were inherently unlikable or unacceptable. But now, with a more mature, sophisticated perspective, you might undertake some self-reevaluation. For as long as you seek out like-minded individuals and groups, your friendship abilities may be greater than you’d previously imagined.

Additionally, your parents may inadvertently have given you aversive messages about your acceptability because, unconsciously, your particular individuality threatened their own. But since you’re no longer under their authority, you can now affirm your own adult authority.

So, going forward, can you devote yourself to repairing the deficits in your self-image and proclaim that your “mission” in life is simply to fully realize who you are? You can do this by pursuing whatever helps you feel more centered, fulfilled, and authentically yourself. Ultimately, that’s the route to your (and, frankly, everyone’s) happiness.

Yes, you’re bound to make mistakes and take some wrong turns. But as long as you can grant yourself permission to be self-compassionate and forgiving, you’ll be fine.

The monsters in your head—at first an incarnation of your inordinate childhood fears and then, paradoxically, the defenses contrived to counteract them—will, at long last, be subdued.