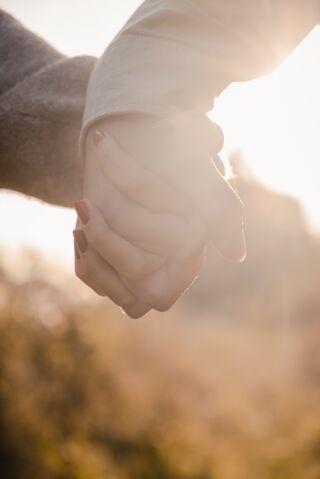 Today’s post is for those of us who have lost a spouse or partner.

Of all the losses I have experienced in life, losing Tom has been by far the most difficult. I don’t downplay other people’s losses—each is its own unique pain—but the loss of a spouse is perhaps the most world-altering in the day-to-day. It is vast, encompassing every aspect of one’s life.

The Romance of the Banal

Most basically, I miss Tom’s company. Your spouse is the person you hang out with the most, the one you can talk to or be silent with. I ate dinner with Tom nearly every night for thirty-five years, give or take. Since he died, I have been eating on “his” side of our little kitchen table so I don’t have to look at his empty chair.

It was Tom to whom I reported the mundane details of my days each evening. He may not have particularly cared—a lot of life stuff is, let’s face it, boring—but he listened to me, and when I was upset, he had a way of putting things in perspective for me. He knew me well enough to know what would help.

And I miss the stories about his days—the people who stopped into his picture framing shop, the things they talked about, his accomplishments, his frustrations. His days were part of my days, and without them, I have lost the piece of the wider world he brought home with him each evening.

The Security of Connection

I miss the feeling that someone always had my back, that there was one person in the world who always had me somewhere on his mind. This hit me one day when I was distributing political flyers at low-income apartment complexes, as I had many times before. But exiting my car in a somewhat sketchy complex that day, I suddenly felt vulnerable, untethered, and alone in a way I never had when I knew Tom was out there thinking about me. How long would it take for someone to notice if I didn’t return home?

Since Tom died, I have put considerable energy into nurturing friendships and am fortunate to have many friends. In this way, I tell myself, while there is no longer one person thinking about me all the time, at least one of my friends might think about me at any given moment. Not the same, but it helps a little.

The Very Feel of Him

I miss Tom physically. I was attracted to him the moment I met him. Even as our bodies did the things bodies do over time, my feelings didn’t change. In The Year of Magical ThinkingJoan Didion pointed out that when you are with a person for a long time, you hold the image of their younger self in your mind’s eye even as you see them in the present.

I never stopped seeing Tom as he looked when we were young and saw me that way. When he died, I suddenly aged. I could no longer see myself through his eyes and had to come to terms with the current reality of myself, with the me that the world sees. Bleah.

I miss his hugs. It’s not that I can’t and don’t get hugs from other people, but his hugs fit and soothed me in a way no others ever have. Among the painful ironies of losing a partner is that this was the person to whom you always turned for comfort, and now, in your greatest need, that person is gone. I hug his pillow, which still smells of him, but it’s not the same. And I got a dog—a big muscular dog who likes cuddles and is very satisfying to hug. Still not the same, but at least she’s sentient.

My bed feels very large and empty. When I needed a new mattress last year, I agonized over whether to buy another king, which seemed extravagant for one person. I ultimately did, since that’s the size of my bed frame and sheets, but also because a smaller bed would have felt even sadder than a big, half-empty one. I still sleep on my side of the bed.

The Language of Love

Tom was extremely funny in a dry, wry, and very particular way, and I miss that desperately. “I’m tired of playing chicken with the toilet paper,” he grumbled to me one day when the roll was getting low, and I still laugh every time I change the toilet paper. I know the things that would strike him as funny and sometimes try to guess what he might say that would make me laugh until I cried—as he often did—but never come up with anything.

And I miss terribly all the inside jokes and references we shared. Longtime couples have their own language, their own catchphrases, and made-up words. Many years ago, when we were going through a rocky phase, as one does in marriage, we were not sure we would make it. But for some reason, we started noting all our little inside jokes and references when they cropped up.

“There’s another one,” we would say to each other, and each time was a little tug of connection. I believe that helped us through to the other side of the crisis. Since Tom died, I have been recording our personal language and jokes in my journal as they come to mind, so I will always have them. I still say these things aloud to no one, and they are still a little tug of connection.

Oh, and I miss the years of shared memories. Now I have no one to ask when I’m trying to remember what we did on that vacation or who that person we met once was. In some ways, longtime couples share a brain. Tom took half my memories with him when he went. So many memories and no one to reminisce with.

And the Sheer Logistics

I miss his barbecue chicken wings. They were legendary, and I don’t know how he did it. Tom did most of the cooking, and feeding myself has become such a dreary chore—I’m neither interested in cooking nor good at it—that friends take pity on me and bring me food.

But that’s just the tip of the iceberg when it comes to the banal, practical details of this loss. When a spouse or live-in partner dies, suddenly you are responsible for everything. Every light bulb that blows out, every time the lawn needs mowing, every bill that needs paying (on a suddenly halved income), every home repair, all the grocery shopping, all the decisions. I’m hyperventilating just writing this.

Then there was the night I had to turn off my water during an ice storm when roads were impassable because a pipe burst in my garage, and water was gushing. With the help of friends on Facebook and Facetime, I did get things handled, but not before an interval of sitting on the cold, wet, icy curb and sobbing.

And I got a new roof this year. A new roof, I had to decide to do that all by myself! It was terrifying. Paralyzing. Yeah, I did it. I also got myself to climb past the second step of a ladder in order to change a light bulb. These are the accomplishments of my widowhood.

I am adapting, as one does. I have my team—plumber, HVAC guys, lawn people, friends with trucks, and one who tracks me on Google maps at all times, especially when I travel. Widowhood is not a fatal condition; I’ll continue to live and figure these logistics out as one does.

But Tom was my person, and the things my heart misses, I will always miss. Even if I fall in love again someday, there will always be a Tom-shaped hole in my life.

And yet—to end on a hopeful note—the further along in my grief I get, the more I realize how much of him I still carry with me as well. Tom helped create the person I am today; his death didn’t change that.