The galaxy far, far away is filled with millions of species, and some of them are just simply adorable. One thing fans can always expect from a new Star Wars film is a whole slew of new characters, and there are always a few that viewers wish they could have as a pet.

Some creatures in the Star Wars universe are not the most friendly, despite their adorable appearance. Others are sweet and empathetic, and can even be trained to be loyal companions. Many creatures even come to the aid of other species and help fight in various battles.

Porgs made their debut during Star Wars: The Last Jedi as the docile, flightless bird-like creatures that live on Planet Ahch-To, where Luke Skywalker exiles himself. They did not get very much screentime, but the adorable creatures still stole fans’ hearts.

Creature concept designer Jake Lunt Davies said that Porgs were invented to cover up the real-life creatures that inhabited the Irish Island on where Planet Ahch-To was filmed. The island was filled with hundreds of puffins-small, round birds that bear a resemblance to Porgs. They were meant to be “so cute Lisa Frank will be pissed she did not invent it first. “The creatures’ big eyes on their round, earless, and beakless heads definitely accomplish this goal.

The Ewoks are fur-covered one-meter tall bipeds native to the forest moon of Endor. They are curious creatures who are skilled in survival as well as the construction of technology such as spears, hang gliders, and catapults. They helped the rebels win the Battle of Endor In Star Wars: Return of the Jedi.

Even though they could very well kill and eat any unsuspecting victim, many Star Wars fans still want to cuddle up with one of these teddy bear-like creatures. They have fluffy arms, small, teddy bear ears, and small, black noses. Fans have even compared them to small, fluffy dogs, which makes them even more adorable.

Fathiers are found across the galaxy, particularly in Cantonica. They can run at incredibly high speeds (up to 75 kilometers per hour), which is why they are sought after by the wealthy for racing, such as the races at Canto Bright. They were featured in Star Wars: The Last Jediand first mentioned in the novel Aftermath: Empire’s End by Chuck Wending.

They are tall, graceful, and have large floppy ears that help them stay cool while racing. Fathiers stand about 3-meters tall and have a somewhat horse-like face, except flat and with eyes on the front of their heads. Although their ears are used for function, they also make them look very cute.

Puffer Pigs are herbivorous mammals native to the planet Kyryll’s World. They live amongst rocks and in mines and are worth quite a bit of money, due to their ability to sniff out valuable minerals. When frightened, a puffer pig will balloon to increasingly massive proportions.

The puffer pigs have only been seen so far in cartoons such as Star Wars Rebels, but are known for their adorable appearance. They have small, round bodies, hooded blue eyes that are far apart, horns down their back, and a large snout. They also make a cute snorting noise and small squeals.

Banthas are large, hairy mammals with two big spiraling horns. They reside on the desert planet Tatooine, but they are bred throughout the galaxy. The Banthas are a social herd animal that is often domesticated and used by the Tusken Raiders as mounts as well as companionship. The Tusken Raiders have a very close lifelong bond with the creatures, and when its rider died, the bantha would usually perish shortly after.

The giant mammals have bright, inquisitive eyes, a wide mouth, and long, shaggy fur. Despite being almost 3 meters in height, they are usually rather friendly and docile creatures. They are peaceful, omnivorous creatures and make for wonderful companions. Their milk is a distinct blue color and can be used for a wide range of dairy products.

Star Wars: The Rise of Skywalker featured the tiny yet memorable droid tinkerer, Babu Frik. The strange little alien comes to the aid of Poe Dameron (Oscar Isaac). He is an Anzellan male who speaks in a heavily accented form of Basic known as Anzellan. He worked for the Spice Runners of Kijimi then moved to Quintil with the Spice Runners to work on fixing droids. This is where Poe and the others found him and he helped retrieve information from C-3PO’s memory banks.

According to fans, Babu was originally supposed to die when Kijimi was destroyed, but Steven Spielberg loved him so much that JJ Abrams decided to bring him back. Fans are glad he did, since many say he was the best part of the movie. He is a tiny creature with white whiskers, big eyes, and a funny voice.

Loth-cats are creatures native to Lothal, usually found living in the grassy plains of the planet. They’re small, temperamental creatures, and can be quite friendly, but they are very capable hunters with sharp teeth and claws. Although it is quite difficult to domesticate a loth-cat, they make very good, though quite destructive, pets. One was spotted in The Mandolorian, growling at Grogu.

Loth-Cats are small, cute creatures that essentially look like bobcats, but with much larger eyes, and wide mouths. Their unique markings make them very beautiful, and their big heads add to the cuteness. They have very large, pointy ears, and soft, fluffy fur. 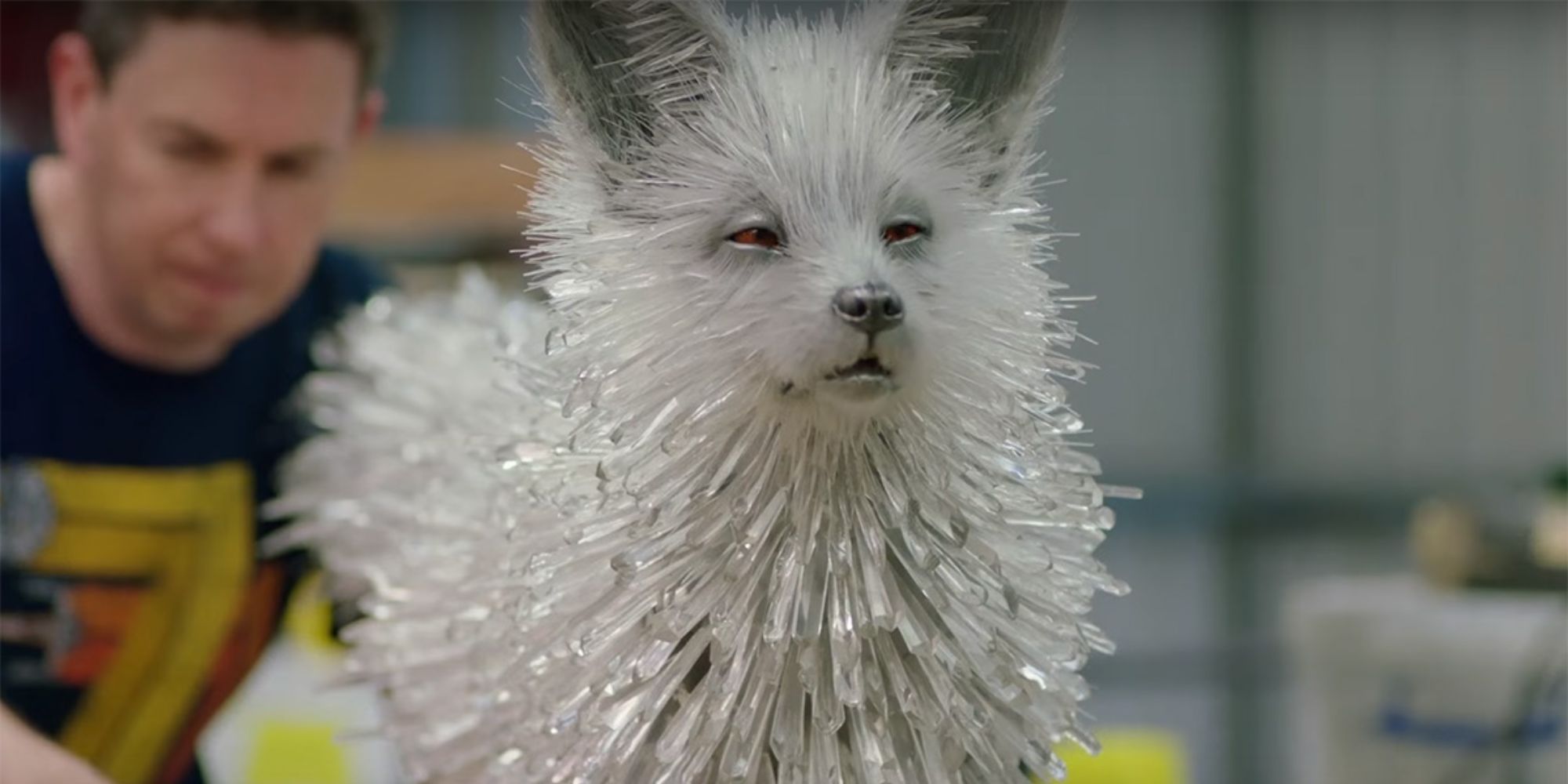 Vulptices are a species of omnivorous canids that reside on the mineral world Crait. They are most easily identified by the white crystalline bristles coating them. They have excellent night vision and extremely keen senses. They’re also empathetic creatures, as seen in The Last Jedi when a Vulptex helped free the trapped members of the Resistance.

They look similar to arctic foxes. According to Neal Scanlanthe creature effects supervisor on The Last Jedi, the foxes’ crystalline fur formed after feeding off Crait for many years. “They’ve taken on the very surface of the planet they live on,” he explained. Their coats are not only breathtaking but also serve as protection against their predators. They may be sweet, but they’re probably not very cuddly.

Ortolans are a blue-colored species with long snouts and floppy ears from the planet Orto. Two of the most famous Ortolans are the Jedi Knight Neem Bees, and the musician Max Rebo. They are known for their fondness for food and music, many ortolans are successful musicians or chefs. Their skin is covered in short, blue, velvety fur, which some ortolans often dye pink, for style.

They are squat and heavily built with trunk-like noses and big, beady black eyes. Their large, floppy ears are very sensitive to sound waves. They have small mouths and hands ending in four chubby fingers and a non-opposable thumb. They look like a toy elephant come to life.

No list of adorable Star Wars creatures could ever be complete without mentioning “Baby Yoda”, AKA “The Child” who won fans’ hearts in The Mandolorian. He is a young male with the ability to use the force and belongs to the same species as Grand Master Yoda as well as Jedi Master Yaddle. He was born in the year 41 BBY and raised at the Jedi Temple on Coruscant.

Grogu was immediately adored by fans as soon as they saw his big, baby-like eyes, tiny hands, and large, pointy ears. Although he was approximately 50 years old when Din Djarin (Pedro Pascal) found him, Grogu both appeared and behaved like a toddler. He stands about 0.34 meters tall and has small strands of white hair on his wrinkled forehead, big brown eyes and green skin, plus ears that move with his emotions. He wears baggy youngling’s robes and waddles when he walks (quite slowly). His Father-son type relationship with Mando was what made fans fall in love with him, and they can not get enough.

Next: Star Wars: Every New Project Coming to Disney +