Anyone who’s ever had an automobile accident knows that the unexpected events surrounding a car crash get seared into your brain.

All the details of precisely what was happening in the milliseconds before, during, and after an accident are easy to remember and hard to forget. The brain seems to replay surprising events that could cause potential harm like a slow-motion movie in your mind’s eye—as it tries to learn from mistakes and figure out ways to avoid unexpected mishaps in the future.

For example, earlier this spring, my car skidded on black ice and ended up in a ditch. At the time, the temperature was about 39º F, and it was drizzling. I was driving just after sunrise, and it was warm enough to hear the pitter-patter of raindrops. The freshly paved road looked wet and glassy, ​​but I didn’t think it was icy. Although I’ve been driving for decades, this was the first time I’d ever experienced a road that just looked wet actually being sheer ice with a slick glaze of water on top.

Today, it’s drizzling and 73º F. There’s no chance of freezing rain or black ice, yet when I was driving around the corner where my accident happened a few months ago, my brain illogically kept wondering if the slick-looking road might be icy. Ever since that surprising event of skidding on black ice caught me off guard, I’ve been incredibly vigilant when driving on wet-looking asphalt, regardless of ambient temperatures.

Surprising Events Trigger a Burst of Norepinephrine From the Locus Coeruleus

New research from the Massachusetts Institute of Technology (MIT) sheds light on how the brain reacts to surprising events. Neuroscientists at MIT’s Picower Institute for Learning and Memory found that being surprised triggers a surge of norepinephrine that perks up attention and sears lessons learned from unexpected events into a mouse’s brain. These findings (Breton-Provencher et al., 2022) were published on June 1 in the peer-reviewed journal Nature, Vincent Breton-Provencher is the study’s first author, and Mriganka Sur is the senior author.

For this experiment, the researchers gave mice rewards for pushing a lever when they heard a high-pitched sound. If they pressed on the lever at the wrong time, they’d get a puff of air in their eyes and no reward. Through operant conditioning, the mice learned to associate pushing the lever after hearing a high-pitched sound with being rewarded.

“The animal is pushing because it wants a reward, and the locus coeruleus provides critical signals to say, push now, because the reward will come,” Sur said in a June 2022 news release.

Sur and his team also tested what happened when mice unexpectedly got a puff of air when they were expecting a reward. In these surprising instances, norepinephrine spiked and the well-conditioned mice seemed to pay close attention to why something unexpected had happened.

In mouse models, the spike in norepinephrine caused by surprise promotes better learning and memory. In another set of experiments, if the release of norepinephrine from the locus coeruleus was blocked via optogenetics, mice didn’t respond the same way to surprising events. The researchers speculate that the human brain reacts similarly to being surprised. 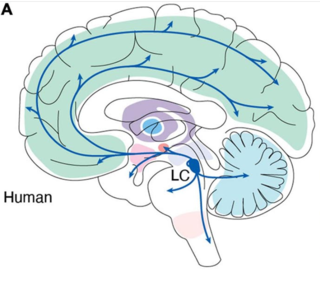 The blue arrows in this image illustrate how the locus coeruleus (LC)—seen here as a “blue spot” in the brainstem—sends norepinephrine to cortical and subcortical regions throughout the brain via efferent pathways originating in the LC nucleus.

The locus coeruleus (Latin for “blue spot”) is a small region in the brainstem with a bluish hue that produces most of the brain’s norepinephrine in both humans and mice. Norepinephrine acts as a neuromodulator that increases arousal, attention, and vigilance states. High levels of norepinephrine for extended periods can cause chronic stress and anxiety. However, quick bursts of this neuromodulator after a surprising event help the brain remember better and learn faster.

Unlike classical neurotransmitters that facilitate cell-to-cell communication between specific neurons, neuromodulators like norepinephrine are “squirted” across widespread cortical and subcortical brain regions, which allows them to exert broader brain-wide effects.

In many ways, surprise is the opposite of boredom. Anecdotally, I know that any time I was bored in school and my eyes glazed over, my brain simultaneously went offline in ways that didn’t support better learning or create vivid memories. The same is true for me as an athlete. Any time playing a sport becomes monotonous or too predictable and lacks surprise, it’s hard to improve.

Last year, in a peer-reviewed Frontiers in Neural Circuits paper about the locus coeruleus and learned behaviors (Breton-Provencher, Drummond, & Sur, 2021) the MIT researchers wrote, “Despite its brain-wide effects, much about the role of locus coeruleus-norepinephrine (LC-NE) in behavior and the circuits controlling LC activity is unknown.”

Their recently published (2022) follow-up paper advances our understanding of how the LC-NE system kicks in after unexpected events and refines learned behaviors. “The surprise-encoding function of the locus coeruleus seems to be much more widespread in the brain, and that may make sense because everything we do is moderated by surprise,” Sur said in the June 2022 news release.

Future research by Sur and his MIT team will explore the synergy between norepinephrine and other neuromodulators, such as dopamine, which also spikes in response to unexpected rewards.

Forthcoming research will also look at how the prefrontal cortex stores short-term memory inputs from the locus coeruleus in ways that seem to help mice learn and master new behaviors. These animal experiments have implications for improving human learning/memory and optimizing athletic mastery associated with peak performance.