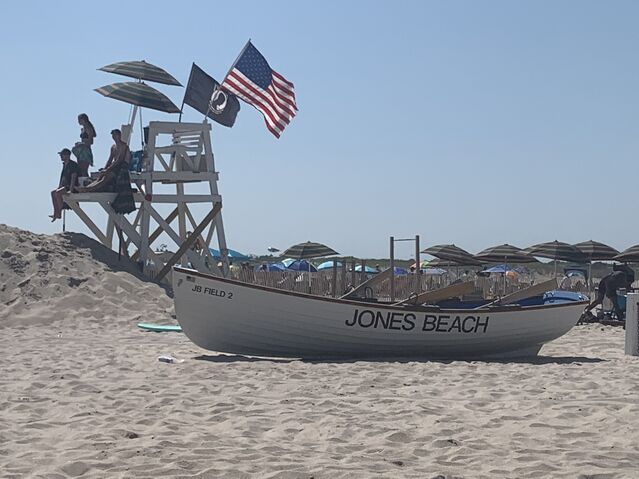 My four-year-old son was mindlessly swinging his whistle on his finger like a teenage lifeguard. When the keys attached to the necklace struck me on the head, I saw stars, but I wasn’t hurt. Shaken not stirred, as James Bond might say, my fight-flight response already moved into high gear.

I wanted to grab him by the neck and tell him never to do that again. I didn’t. That would be the classic fight-flight.

Momentarily, the world seemed to slip away from me, and I prepared to bow my head for a total emotional shutdown—classic shutdown and collapse.

My wife jumped in to scold him and teach him how hurtful his actions were, but she was in fight-flight mode too. We were all adrift, and the irony wasn’t lost on me that we all needed a lifeguard now!

I gathered my senses and remembered to befriend my nervous system and to befriend his, too, as polyvagal theory author and teacher Deb Dana writes so eloquently about in her new book Anchored, I said nothing while I allowed myself to come back to center, called a ventral vagal state, a place where self-regulation and connection are possible again.

How could I befriend my son’s nervous system? It dawned on me that he had just woken up and was not far from that dream-like state where self-soothing and danger converge. He didn’t mean to hit me at all and was trying to find his way into his body, and he overshot its mark on my face.

How could I help regulate him? Deb Dana and polyvagal founder Stephen Porges call this co-regulation, and it is the foundation of not only connection but of survival and thriving as a species. Contrary to the American credo, we aren’t meant just to be independent. We’re meant to be interdependent while holding on to the autonomy that is our birthright.

In order to do this, I needed first to regulate myself. I quickly realized I could express myself from a place outside of the sympathetic cauldron of fight-flight or the dissociative black hole of a dorsal-vagal shutdown. I told him calmly that I knew he didn’t mean to hit or hurt me, and yet at the same time, I wanted him to notice that sometimes these things can be dangerous and hurtful.

I told it to him without malice or retaliation, not in the dysregulated state of fight or flight or dorsal shutdown, but from the zen place of ventral vagal equanimity. I didn’t demand an apology so much as request it as a sign of our repairing and making things better together. To shame him into an apology would be an easy way to teach him one thing–social etiquette–while showing him other unnecessary lessons in conformity, shame, and fear.

Not surprisingly, I could see in my son’s eyes recognition of what he had done, and in my calm, he started to become calm again too. What began as an untethered moment of the possible fight, flight, or collapse transformed into a moment of repair, reconciliation, and respect.

Many of us need to signal our inner lifeguard like this. How can we do it?

First, we must recognize how easy it is to get taken away by the riptide and undercurrent of our sympathetic fight-flight response when we are stressed and activated. No judgment here. It’s our autonomic system doing its necessary thing to keep us protected and safe.

Any and all of these are likely informed by the ways in which we were cared for or not cared for by our parents, our earliest and most important emotional teachers. Did they help us coregulate in these situations, or did they push us further into the water while we were drowning, making us resort to fighting, fleeing, or dissociative shutdown?

Second, we must recognize that if this fight-flight system is not doing its job, we will go further down into dorsal vagal shutdown. This is the playing possum defense mechanism we all developed 500 million years ago as our failsafe. It’s helpful, but it also takes us away from being able to think, reflect, or even feel from a place where we can do anything about our situations. This is a moment of temporary psychic death in the service of survival.

It’s helpful to know the cues and triggers for this terrifying place. Compared to the flailing in the water, we feel in sympathetic fight-flight. A dorsal vagal shutdown is when we go unconscious as the water takes us under.

Rest assured, the more we notice our fight-flight, the more we recognize how the system of dorsal collapses. This is when we feel utter despair, hopelessness, and deadness. If we can befriend our nervous system in these situations, we can do psychological CPR and get oxygen back into us.

How do we do that? We notice that we need anything and everything to remind ourselves of the inner and outer lifeguards who can help us back. It could be envisioning or taking ourselves to a safe emotional and physical space, it could be connecting with a friend, partner, family member, or therapist who can help us coregulate and come back, or it could be asking our nervous system most honestly what it needs to feel safe and hopeful again.

There are many ways to find your inner lifeguard, but the basic methods of returning to ourselves are built into our nervous systems. The wisdom at the heart of polyvagal has the power to keep us all afloat and make sure we continually connect to the creative flow that is our greatest power.