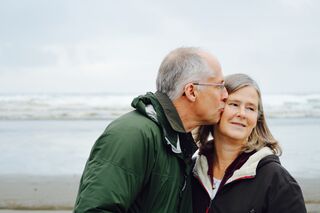 Healthy sexuality holds many benefits for patients with chronic diseases. These include better relationship quality, psychological well-being, and overall quality of life, as well as better health. Indeed, “sexercise” can reduce the risk of further heart problems, for example.

And despite media portrayals in romantic movies and beyond, older people are sexual (rates of sexually transmitted infections in retirement facilities are high!). Yet, about half of older people with chronic diseases are not having sex, and half of those are having sexual difficulties; most are not discussing this with their health care providers.

WHO also asserts that sexual health requires a positive and respectful approach and the possibility of having pleasurable and safe experiences. Far too many people have been victims of sexual violence, which impacts their future sexual well-being. Please seek treatment if you have been a victim and need care. Sex should always be consensual.

People with chronic diseases have decreased sexual activity compared to their same-age peers. They are also more likely to have sexual issues. This is caused by their often poorer circulation, lower physical fitness, and the side effects of some medications (but please do not stop taking them without first consulting your doctor to support you in switching to an alternative as these medications prolong your life). These issues may be exacerbated by psychological problems (see this post) and the use of alcohol or drugs.

Sexual dysfunction in men most commonly involves erectile dysfunction (ED). In a sample of heart patients in the community, for example, the rate of ED was over half, which is two times higher than in the general population. This makes sense because these are vascular conditions where the flow of blood throughout the body is negatively impacted. Those with ED were more likely to be anxious and depressed.

In women, sexual dysfunction commonly involves vaginal dryness, as well as issues with desire and arousal. Indeed, vaginal dryness may present one to three years before the onset of chronic disease and be a “warning sign,” just like ED in men.

In the next post, we will discuss the treatment of sexual issues in chronic diseases.

When can I have sex again, Doc?

After a chronic disease event, such as a heart attack, or treatment such as bypass surgery, many patients (and their partners, too) report anxiety about resuming sexual activity. For example, they might worry it could induce heart palpitations (ie, arrhythmia), chest pain, or even death. (Rest assured, the risk is not higher than in patients who did not have heart attacks, although there is an infamous case in the literature about a patient who died during extramarital sex.)

Sexual concerns are often the top stressors for couples around the time of a chronic disease hospitalization, and distressed spouses report significantly less intimacy in their marriages. Sometimes spouses can become unnecessarily over-protective due to their fear of inciting a rhythm device shock or heart attack, so they avoid any intimacy that could potentially lead to sex. This is a shame, as couples miss out on the many benefits of sex (see above).

Partners who have been together for many years often have established sexual routines. They may need to be open and creative in negotiating new behaviors and roles to adapt their sex in the context of chronic disease. For example, patients who get a ventricular assist device may feel renewed vitality and, hence, interest in sex, but they will need to consider the device itself and ensure not to disturb it with their movements. Patients with rhythm devices may need to consult with their electrophysiologist to adjust the settings.

Indeed, many couples experience sexual issues in the years leading up to a chronic disease diagnosis due to the increasing physiological effects of the disease. So, oftentimes, the diagnosis is a turning point where this could be addressed. There are treatments available, which will be discussed in the next post.