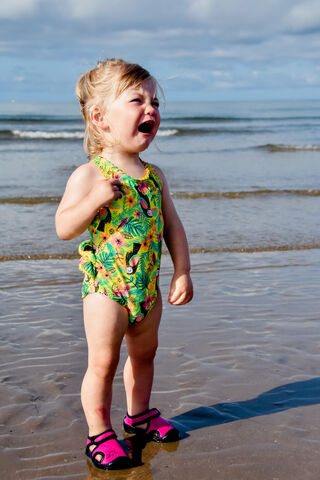 Not wanting to leave the beach

You may think that your children have feelings all by themselves. After all, you did not ask for your toddler to have a temper tantrum, and you certainly did not ask for your teenager’s rebellious anger. Maybe you didn’t, and yet their emotions are formed in the relationship between you and them.

Imagine it is a beautiful day, and your family has spent the afternoon at the beach. When it is time to go home, your toddler Jane throws a big temper tantrum. What do you do?

You could say: “I’m sorry, sweetie. You don’t want to go home yet? Let’s play for 5 more minutes, but then we really need to go.”

I predict Jane will go back to playing for another 5 minutes. When it comes time for you to leave, Jane may come with you without protest—if you are lucky. If you are not, she may start another temper tantrum. After all, you have just given Jane the license to be angry when she does not like something. As a parent, you have helped to shape your toddler’s anger.

Alternatively, you might shape Jane’s emotion in another way. You could respond to her temper tantrum with a stern, “Hey!” and threaten her with a time-out, or just simply tell her she should not act like a spoiled baby. In that case, Jane will more likely swallow her anger, and it will fade. You have made sure that Jane knows her place; she learns that merely not liking something does not give her license to be angry.

Or you could shame Jane. You could tell her she should be grateful that she got to go to the beach in the first place and that she is making a fool out of herself. You could point out to her that the other people at the beach are all looking and make her wonder what the other people would think of her and her family. In this case, Jane’s anger may not only fade, but it may transform into something closer to what we would call shame or embarrassment. If not in the moment, then over time, Jane may come to learn that anger is bad and that shame is the more appropriate response when you insist on your own way and don’t get it.

As I described these different scenarios, you may have spontaneously thought of certain parents who fit the bill—who are participating (most of them inadvertently, I believe) in shaping their children’s emotions. Relatives, neighbors, or parents at your kids’ school may have come to mind. In fact, in my book, I write about parents who would respond in each of those ways.

It turns out that the typical ways in which parents in different cultures or groups respond to their angry children differ.

Middle-class, white American parents want their children to be autonomous individuals who have high self-esteem, take the initiative, express their preferences, and influence their worlds. They tend to take their child’s anger seriously and negotiate with them—in this case, about how long to stay at the beach.

Working-class single mothers in urban US contexts told their children to stop their anger because they wanted to prepare them to be responsive to the demands of the world. They did not always disapprove of anger. They encouraged their children to be angry when taken advantage of by peers—their children should be strong enough to defend themselves—but they did not tolerate anger when directed at themselves. When these mothers decided it was time to leave the beach, they admired their children not to act “spoiled.”

Taiwanese parents shamed their angry, demanding children. A child who did not obey their parents clearly did not know their place in the hierarchy for everyone to be seen. Taiwanese parents in that situation pointed out to their children how shameful their refusals were.

In each cultural group, parents teach their children their role in the relationship, and in doing so, they shape their children’s emotions. In a middle-class, white American family, Jane’s anger would be given space; it informs her parents about her wishes. Her anger disappears because her desires are satisfied: The family does not leave the beach right away. In a working-class, urban family, Jane’s anger at her mom would make her a “spoiled” kid, and it transforms into respect for her mother’s decisions—or, at the very least, some trepidation. And in Taiwan, Jane’s anger transforms into shame or embarrassment—she goes from claiming her right to stay to acknowledging there was no right whatsoever, and she has overstepped the boundaries of her role. Shamed her parents even. Arguably, these children in different cultures did not have the same emotions. What started as frustration took different shapes between the toddler and her parents—it was rewarded, nipped in the bud, or turned into a violation.

Was one of these parents doing a better job than the others?