Two days after the May 24 Uvalde school massacre that claimed the lives of 21 people, two major league baseball teams did an unusual thing. Instead of tweeting about the game they were playing against each other, the New York Yankees and Tampa Bay Rays chose to tweet a series of facts about gun violence, including “Firearms were the leading cause of death for American children and teens in 2020” and “Every day, more than 110 Americans are killed with guns, and more than 200 are shot and injured.” Each statement was accompanied by a citation from a credible source, like the Centers for Disease Control and Prevention (CDC).

Every time there is a mass shooting involving school children, we see a spike in media attention to gun violence and an increase in calls by politicians for federal gun control legislation. What the Yankees and Rays baseball teams did was laudable, but it raises the question of whether this kind of recitation of facts about gun violence immediately following an incident has any impact.

At the time, we wondered whether the latest surge in interest in gun violence would last, whether it would lead to any action, and exactly what kind of action might actually work to decrease gun-related deaths and injuries.

Here’s a fact about guns: according to Monika L. McDermott of Fordham University and David R. Jones of Baruch College, CUNY, “Nearly half of the public lives in a household with a gun.” That’s the US public, of course. Most other high-income countries have much stricter gun laws than the US and far lower rates of gun-related deaths and injuries.

McDermott and Jones point out that although a “slim majority” of Americans favor stricter gun control legislation, “that support tends to spike in the short term after events like the recent mass shootings [Buffalo and Uvalde],

Congress can thus size up that a lot of people own guns and only a small majority favors restricting access to them. To avoid taking any action, it can just wait a bit until the furor over the most recent killings subsides. That means that a gesture like that taken by the baseball teams has a short-lived effect that won’t translate into any meaningful action.

As we move farther away from highly publicized gun violence incidents like those in Uvalde, Texas, and Buffalo, New York, we see more and more doubts expressed about whether gun control legislation would even be effective in reducing gun violence. After all, there are already millions of guns in the hands of Americans—an estimated 120.5 for every 100 citizens—so some argue that further restricting sales and access will have no meaningful impact. 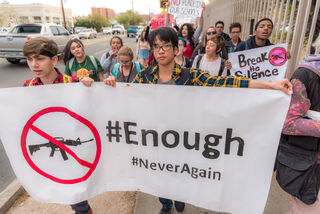 We also see other doubts about the effectiveness of gun control laws cropping up. For example, in an analysis in the Washington PostGlenn Kessler concluded from work done by gun researchers that “mass shooters are very determined individuals and that even with an average of seven or eight mass shootings a year, new laws might only reduce the number by one a year.”

Later in the article, Kessler does acknowledge a now-lapsed law banning large-capacity magazines “may have been effective in reducing the death toll” and that universal background checks “could have an impact on mass shootings.” Still, the tone of the article casts doubt on the likely impact of some of the most prominently proposed gun control laws, like bans on assault weapons.

It is not only politicians who lose interest in gun control legislation over time but all of us. We are shocked and horrified by the deaths of innocent children during a mass school shooting, we talk about nothing else for several days, and then the memory fades, and we move on to other pressing topics.

“A dramatic event like a shooting attracts reporters’ attention, provokes a great deal of coverage, and then fades from view when the news media move on to the next big event,” wrote Sarah Binder last May in the Washington Post, “What’s more, public pressure for change typically fades as well, letting opponents off the hook.”

The Science About Guns Is Clear

But the fact remains that the Uvalde shooter purchased his guns legally just days before the massacre, right after his 18th birthday. Laws banning the purchase of assault weapons and raising the legal age to buy a gun from 18 to 21 across the country might have prevented him from obtaining the weapons he used.

We can debate the likely effectiveness of gun control laws endlessly, but perhaps what we need more of are headlines like the one that appeared on May 26 in Scientific American: “The Science is Clear: Gun Control Saves Lives.”

Scientists love to debate all the details and nuances of available data on every topic, and pieces like the one cited above in the Washington Post that carefully dissect the evidence supporting gun control laws are important. Still, what we need to know is that scientific consensus supports gun control. The piece by the Scientific American editors does not equivocate:

The science is abundantly clear: More guns do not stop crime. Guns kill more children each year than auto accidents. More children die by gunfire in a year than on-duty police officers and active military members. Guns are a public health crisis, just like COVID, and in this, we are failing our children over and over again.

The clear gun science the article’s headline refers to is summarized as follows:

…in 2015, assaults with a firearm were 6.8 times more common in states that had the most guns compared to the least. More than a dozen studies have revealed that if you had a gun at home, you were twice as likely to be killed as someone who didn’t. Research tells us that states with higher gun ownership levels have higher rates of homicide. Data even tells us that where gun shops or gun dealers open for business, killings go up. Science must not be ignored.

We need definitive, bold statements like those made in the Scientific American article. While, of course, we always need more research on almost every topic, and gun violence research has been woefully underfunded for many years because of federal funding restrictions, we have enough data right now to justify consideration by Congress of steps like renewing the bans on assault weapons and large-capacity magazines, universal background checks for gun purchase, and raising the age limit for gun purchases from 18 to 21.

It is true that so long as US residents who are not active military or law enforcement personnel are permitted to have guns, none of these laws will eliminate gun homicides or suicides. The data tell us they may reduce the number of gun-related deaths and injuries, which should be more than ample justification for pursuing them.

We will need to make federal gun control legislation happen to keep our attention level on this issue sustained at a high level. We must not think that gun violence is isolated to the relatively rare school massacre. According to Pew Research, in 2020, the most recent year for which complete data are available, “45,222 people died from gun-related injuries in the US,” slightly more than half of which were suicides.

The Pew report from last February also notes that “Regardless of the definition being used, fatalities in mass shooting incidents in the US account for a small fraction of all gun murders that occur nationwide each year.” Firearm-related deaths and injuries occur daily in communities across the US

Media attention to every gun-related death in a community runs the risk of inuring the public to these tragedies and blunting our resolve to do something about them. Rather, we need sustained, targeted attention throughout the year to the problem.

Articles like the one cited above in Scientific American need to appear regularly throughout traditional and digital media, not just after mass shootings involving children.

We hope the Yankees and Rays, and lots of other influential organizations will tweet and post about this problem again and again.