All too often, the struggles between men and women rear their ugly heads. Do I sound dramatic? If so, consider what piques your most frequent and intense emotional distress.

I’m clear on what triggers mine. Ironically, but sadly, don’t most of us experience our most heated conflicts–the steepest rise in our emotional temperature–within our closest relationships?

Closeness to others, particularly our intimate other, seems to guarantee that we’ll have periodic skirmishes and unavoidable friction simply because of our individual differences.

But how much do our gender role expectations amplify our differences and thus play a role in turning up the conflictual heat?

Chillingly, according to a study conducted in 2017, 58 percent of the 87,000 women who were intentionally killed were murdered by their intimate partner or a close family member. Globally, 35 percent of female homicides were committed by people who once claimed to love their victims. These and related studies have investigated the gender-based differences between men and women as a contributing factor to these horrifying statistics.

Who does the killing? Is it gender-related? To what degree can these atrocities be explained by the disparities in gender role expectations? For instance, men are expected to be strong, and women are expected to be caring. Further, women have traditionally occupied social roles of lesser status while men have enjoyed the opposite.

Granted, the feminist movement has spearheaded great strides in furthering equality among the sexes, and its efforts grind on slowly leveling the male-female playing field. Most recently, professional female soccer players were awarded compensation equal to their male counterparts. Sadly, however, gender-based inequities persist in feeding and keeping alive the tension between the sexes. Unhappily, professional soccer aside, females are paid eighty-three cents to the male’s dollar.

Our gender role expectations both attract and repel us. What initially attracted you to your intimate partner? Has your perception of your partner’s qualities changed over time? Not uncommonly, the qualities we originally found attractive morph into a relationship liability as, over time, we evolve a more nuanced, complicated, and complete view of our partners. For instance, a partner who originally exuded “confidence” is now seen as “demanding and controlling.”

At our couple workshops, we find it helpful to highlight male-female gender stereotypes by asking audience members to shout out the first thing that comes to mind when they hear the words “masculine” and “feminine.”

If you were in our audience, what would you shout out? And wouldn’t your responses come quickly, even reflexively? But more importantly, we stress the disinformation embedded in male-female stereotypes and how readily and exponentially it spreads–much like a viral contagion. Now, here’s how our audiences typically respond (see lists below). Remember, like statistics, these stereotypes describe everyone, yet no one in particular. Nevertheless, your responses are probably the same or like those of our audiences. 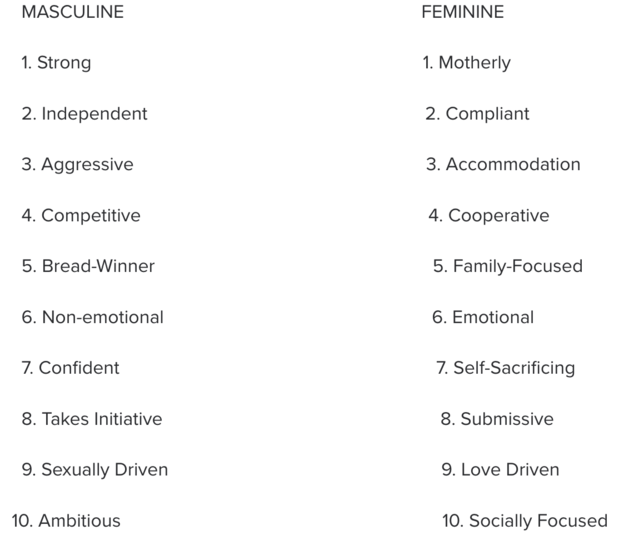 Notice that these lists of descriptive adjectives, or stereotypes, are largely opposites. Like oppositely charged ions that attract and bond to each other, men and women are attracted to their differences, especially at the beginning of their relationships–”opposites attract.”

Moreover, during romance, male-female differences are powerful and intoxicating propellants of attraction. Like a welder’s torch fuses metal parts, our gender differences meld us together in a heated, complimentary, but usually temporary fashion. For example, by contrast, compliments her softness and affirms her strength, and vice versa. Further, “compatibility” abounds as perceived partner congruities are roundly celebrated.

This experience can even be habit-forming, and the popular media–particularly a la Hollywood–supplies us with a steady diet of scintillating romance. In fact, romance is so deeply suffused into our popular culture that we may feel we’re missing something, that we’re side-lined if we’re not hotly romantic ourselves.

The Highs and Lows

Reinforced by gender differences, romantic love is one of, if not the most powerful form of human connection. It affirms us like few other experiences and provides a deeply potent incentive to strengthen our commitment to each other. It boosts our self-esteem, and we come our closest to feeling omnipotent as though, teamed with our romantic partners, we can accomplish anything–the sky is the limit!

However, on the negative side, gender differences can also breed romantic illusions nourished by the fantasies of wishful thinking rather than objective realities–who I’d like my partner to be as opposed to who they really are. Much like an addictive drug, romance hooks us quickly and deeply with a transient euphoria. Thus, it tends to have a short lifespan. However, while in its grip, we often feel our romantic partners are the alpha and omega of our happiness–a shared delusion.

From Differences to Irreconcilability

But again, what happens when they try? In this sense, sex-role stereotypes are socially transmitted disinformation of a potentially crippling nature. Worse still, in the context of the intimate relationship, they can be a spawning ground of couple hurt, confusion, and conflict as partners try but inevitably fall short of what amounts to unrealistic, unsustainable standards.

A Union of Opposites–From Binary to Androgyny

Imagine his and her straightjackets: His keeps him “emotionally constipated” out of his efforts to constantly look strong by suppressing his weaker appearing emotions. Hers keeps her locked in a socially mandated obligation to attend to the needs of others first, which often erases who she is or what her needs are.

Now, imagine a third option consisting of a non-binary, non-either or, non-male vs. female rendition of the sexes achieved by reaching deep below the surface of our respective gender roles to our most fundamental and common human needs. As you imagine this, consider that all traits, male and female–and those in between–have their genetic dawning in our common humanity. By adopting this reasoning, gender differences are neutralized, or more conceivably, they can lose their social imperative.

Further, this third option detours gender stereotyping by adopting a humanized, “homogenized admixture” of male and female qualities, eclectically folding them into a single composite of human traits–a union of opposites. Again, the divisively rugged polemics of male vs. female, us vs. them, can melt away.

Just imagine him having unfettered access to all his emotions and the freedom to express them with social indemnity–specifically, he’ll no longer be seen as weak or less manly for expressing his softer, vulnerable feelings. On the contrary, he’ll be esteemed for being more completely connected to himself–emotionally integrated–and therefore more fully human.

And she’ll no longer appear selfish or uncaring for balancing respect for her own needs with the needs of those she’s close to. Can you picture it, men and women freed of the emotionally cocooning restrictions of their respective sex-role expectations? By this means, could male-female inequality be remedied? Could it put a stop to the endless war of the sexes?