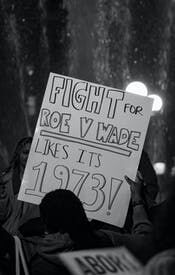 The pain of realizing that people like me, those of us with the ability to become pregnant and give birth, are no longer full citizens of the United States is deep and sharp. Others such as Tressie McMillan Cottom have written about this denial of full citizenship rights more powerfully than I could. As a feminist scholar who has spent decades studying gender inequality, I realize that one court decision has set back changes toward gender equality that generations have fought for.

In my research I have often studied intimacy between sexual partners, and how it has changed between the 20th and 21st Century. We have gone from alarm at the increasing number of women with pre-marital sexual experience to being perplexed at the decreasing sexual activity of teenagers today. But through it all, the right of women and people who can become pregnant to control their own fertility has allowed the right to sexual pleasure for all to be taken for granted. No one beyond those bound by a literalist religious theology expects to have to wait until marriage to explore their own sexual desires, and surely no one expects to return to abstinence in the event of a divorce. One of the too-rarely-acknowledged consequences of Roe vs. Wade was women’s full access to the rights to sexual pleasure without the fear of an unwanted pregnancy that they are forced to carry to term. Thus, reversing Roe is an assault on bodily autonomy in all forms, including an assault on the right to sexual pleasure.

My own research, co-authored with Rachel Allison, suggests that the expectation of recreational sex has gone far beyond simply being an expectation of adulthood; hooking up has come to define the “college experience” among young people privileged enough to go to residential, four-year colleges. Even among students at primarily working-class urban campuses where many students live with their families, young people still believe “hooking up” defines the college experience, and they are disappointed that they can’t afford to live in a dormitory far from their parents policing. Research by Lisa Wade suggests that the culture of casual sex is so strong that even those who would prefer to have deep relationships feel pressured to pretend they do not want to mix feelings with sexual activity while in college.

It has only been since the legalization of birth control for single women in the 1960’s—and then the national availability of abortion soon after, in 1973, with the Roe vs. Wade decision—that sexual culture in America could change to allow for recreational sex. Only when heterosexual women were totally sure that sexual activity would not result in an unwanted child, they could be free to enjoy, and even seek out, sexual pleasure outside the bounds of relationships. And change came quickly: In the 1950’s most women were virgins until marriage, or if not, they had sex with one partner before the wedding night: their fiancé. By the turn of this century, few brides were virgins because most young women had explored their own sexual desires during their emerging adulthood. By the time they choose a partner, most of us, whether heterosexual or not, cis-gendered or not, have had years of experience in dating and with sexual activity. Recreational sex is a normal part of young adulthood, useful for understanding one’s own sexual desires, likes, and dislikes. The rising age of marriage, and with it, the falling rates of divorce, are no doubt related to young people being able to have good sex lives without committing to the wrong person too early, just to have an available sexual partner.

But this is all old news; old news that is newly relevant in a post-Roe world where safe and legal abortions will once again become beyond the reach of many American women. A caveat is important here: Abortion will not be beyond the reach of Americans who know how to scour the internet for pills that induce medical abortions, even if the pills themselves are not legal in their state. Nor will abortion be unavailable to people who can afford to travel to a state that provides full health care to women. But for minors whose parents are disapproving of their sexual activity and oppose abortion, and for those who do not have the funds to go elsewhere, the cost of sexual activity can be a life disrupted, if not forever damaged. Indeed new research just published by Hutchens (2022) in the journal that I edit, Gender & Society, suggests that there are religiously motivated women across the country who volunteer in “pregnancy crises” centers that disguise themselves as places to help women with unwanted pregnancies, but actually seek to convince them to carry the unwanted fetuses to term. Hutchens’s research shows that these women may be effective because they do not openly proselytize but rather offer empathy while dissuading women from seeking the health care they desire. In the coming years, such delays may be even more detrimental if the women who have been deceived waste precious time that needed to be spent driving out of state to end their unwanted pregnancy.

So what will the cultural ramifications be of depriving women, and others who can become pregnant, of the right to fully control their fertility? Will men step in to assure their sexual partners that contraception is everyone’s concern, and step up to take responsibility for that cntraception, from condom use to vasectomies? More research in Gender & Society suggests that men will not step in and save the day. Dalessandro and his colleague’s research shows that men have little inclination to take responsibility for contraception, presuming it to be a women’s responsibility. They find that college men presume their sexual partners are STI-free, responsible for contraception, and will pursue abortion services if necessary. So they leave women’s fertility up to the women themselves. If women and others who can become pregnant cannot control when and whether to have children, our attitude toward sex cannot help but to change. Just how much pleasure is worth an unplanned pregnancy that cannot be terminated?

Since women’s right to bodily autonomy is no longer guaranteed by our Constitution, it seems quite plausible that interest in casual recreational sex will diminish as well, at least heterosexual intercourse. The freedom to seek pleasure, for its own sake, rests on the presumption that a mistaken pregnancy can be ended and not result in a forever changed life, an education rather than a fetus aborted, too many mouths to feed with too small an income, or too many sleepless nights to continue to progress in one’s chosen career. Women have always had to struggle to juggle their work and motherhood, but that can only be successful when motherhood is freely chosen. The right to bodily autonomy does not guarantee this free choice for all, but it is a necessary pre-condition. When the state forces parenthood upon those unwilling because of unintended pregnancy by a denial of comprehensive health care, the survival of sexual culture that values ​​pleasure is unlikely. Perhaps that is the goal of Christian conservative judges in the first place: to assure that women fear heterosexual sex itself. When men do not fear sex but women do, the power of patriarchy has increased as women have one more reason to fear men themselves. But pleasure for men who have sex with women decreases as well, as enthusiastic sexual partners disappear due to the fear of pregnancy.

Sociological research has long shown that culture reflects the opportunities and limitations we face in our every day lives. When those who can become pregnant lose the right to control their fertility, all people lose a culture that celebrates pleasure. We lost the right, and expectation, to anxiety-free heterosexual sexual intercourse simply for the sake of pleasure on the day Roe V. Wade was overturned. It’s one more loss for future generations, and one more way that future generations’ lives have been diminished by the Supreme Court of the United States of America.