This past spring, I co-taught a class with a colleague of mine who is a play therapist. The course was called “A Cross-Cultural Comparison of Play.” As part of the course, we traveled to Sweden for eight days to compare the play of children in Stockholm to the play of children in the United States – particularly in the New Jersey area, where my students from Rider University observed children before we left.

The course was originally designed to travel to Japan, as a good deal of the literature on cross-cultural differences in play compares children of Asian descent to those of Euro-American descent (eg, Farver et al., 1995; Farver & Lee- Shin, 1997, 2000).

However, the COVID-19 pandemic restrictions necessitated that we rethink our plan. The COVID-19 pandemic, incidentally, had incited me to notice the increase (at least during quarantine) of outdoor, unstructured play (see also my recent paper on this topic). I suspected that this type of play has substantial benefits for children, and research corroborated this belief.

And so, given the benefits listed above and our inability to travel to Japan for the course this time around, my colleague and I decided to travel to a country where play – particularly free, unstructured outdoor play – is highly valued. Although this is true of just about every Scandinavian country, we chose Sweden after reading the book There’s No Such Thing as Bad Weather by Linda keson McGurk.

McGurk’s book highlights the heavy weight Swedes place on play and outdoor time in general. For example, McGurk frequently refers to the Swedish value of “friluftsliv,” which roughly translates to “open-air life,” or a way of life heavily revolving around exploring and enjoying nature. She also discusses the high value Swedes place on “allemansrätten,” or the right to public access. This common law gives the general public in Sweden extensive rights to recreate in nature, including camping, hiking, foraging for berries and mushrooms, and even on private property.

Even in the cities, Swedish families prioritize time outside and access to outdoor spaces where families can bring their children. In the capital city of Stockholm, with a population of just under 1 million people, public parks and gardens cover 40% of the city’s area (a total of nearly 10.5 square miles of parks) and include over 300 playgrounds.

The average preschooler in Sweden spends about an hour and a half outside every day – on a bad-weather day in the winter. On a nice day in the summer, they spend about six hours outside.

The parental leave policies in Sweden allow parents time to take their children to parks and playgrounds, and the nearly-free preschools also take regular trips to playgrounds if they are located in the city and don’t have large yards themselves. When we were in Sweden, we got to visit some of Stockholm’s play spaces – both indoor and outdoor – and what we saw was incredibly different from what we were used to seeing in the United States. 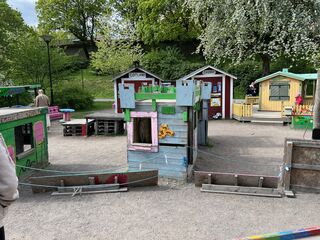 A children’s village at Parkleken Ralis

For example, on a trip to Parkleken Ralis (where “everyone is welcome” (ages 0-150+!)) on a Tuesday morning, we found several visiting preschools (identifiable by their matching reflective vests). 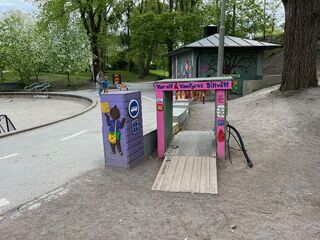 A gas station for bicycles and other kid vehicles!

This was an enormous, open playground with tons of play spaces that looked very different from traditional US playgrounds. Although there were slides and swings, there were also villages of child-sized buildings (including a “mobile shop,” a “pizzeria,” a fortress, a gas station (for bikes), and Pippi Longstocking’s house), a section of “ creepy woods,” a mini soccer field, a Gaga Pit, an open-air theater, a café, rock-climbing walls, and a tool shed where adults sometimes put out loose materials and tools such as hammers, saws, and screwdrivers for children to build with. 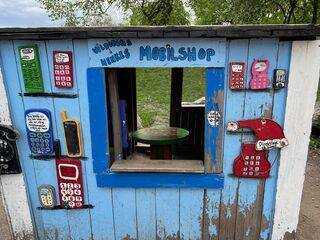 Completely the park are signs painted by children, such as one celebrating differences (Translation: “The most important thing is that we are different; otherwise we would not have known each other”), and a warning children to watch out for parents who may be absorbed in their cell phones! 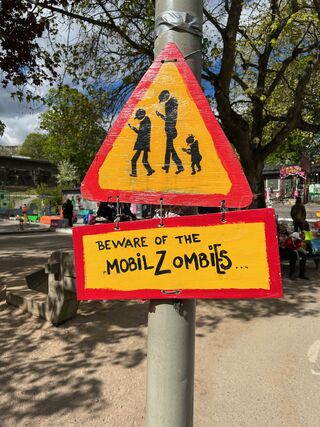 The “creepy woods” mentioned above are full of objects made by the children.

The whole park was incredibly colorful and inviting. And, as the sign that there was no age limit suggested, my class of 18-22-year-old students seemed to have just as much fun playing there (if not more!) as the toddlers and preschoolers!

We noticed that many children were playing without hovering teachers or parents. In Sweden, there is a common belief that independent, risky play is important – that if the children are constantly hand-held and helped, they won’t learn to do things on their own. 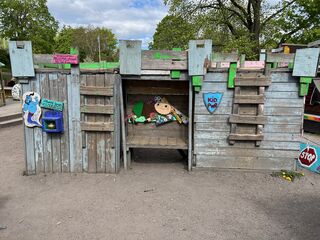 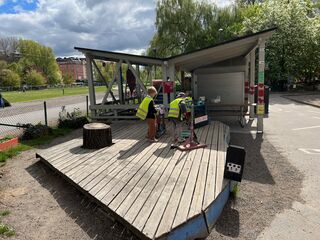 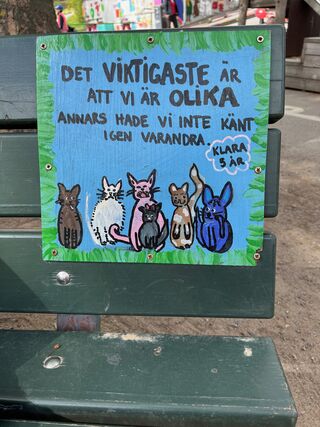 Translation: “The most important thing is that we are different otherwise we would not have known each other.” Painted by Klara, age 5.

Anecdotally, I observed that these children seemed quite content with this freedom. They were very respectful of one another and their teachers. Perhaps because they were trusted to play independently and given the time and space to play and spend their excess energy, there was no need to act aggressively or wildly.

The minute a whistle was blown (which was not until after about 45-60 minutes of free play), the children dutifully dropped whatever they were doing and reported back to their teachers.

I suspect that upon return to their preschool, these children most likely continued to behave well and paid better attention after having gotten so much fresh air and having used so much energy. 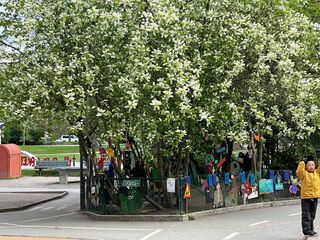 In addition to Parkleken Ralis, we visited a famous indoor play place in Stockholm known as Junibacken. Junibacken is a museum intended to showcase the authors and illustrators of children’s books, particularly those of Astrid Lindgren.

There is a story train, theater performances, a huge bookstore, a themed cafeteria, and several themed playrooms. These play spaces are designed to immerse children into the worlds of their favorite stories and are fantastic for inspiring play and imagination. 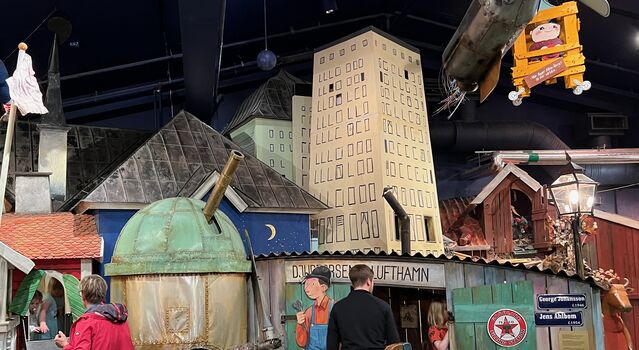 As adults attempting to observe children playing here, we noticed the inaccessibility of many of these spaces to adults. Again, they are designed with children in mind – and not with hovering parents. This allows the children to do the climbing, the exploring, the discovering and then figuring out – on their own. 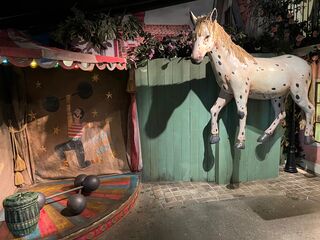 The spaces were vivid in color, visually and physically appealing, and successful in enticing children to do just what they were designed for – play for hours. 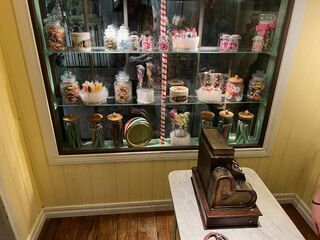 A candy shop within a playspace at Junibacken

Although the stories and settings were not as familiar to us Americans, the kids at Junibacken sure knew them. And it didn’t really matter – my colleague’s 2 -year-old American toddler may not have known the stories, but she didn’t want to leave – she just wanted to play and play!

Over the course of our eight days in Stockholm, we saw lots of other play spaces as well. We visited several popular destinations for families, including Skansen, Kolmården, Gröna Lund, and the Swedish Toy Museum, to name just a few. We also came across multiple free, public playgrounds sprinkled throughout the city. 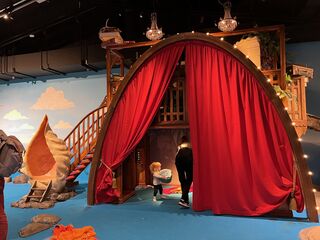 It is clear that the Swedish people value play, and outdoor play in particular. It is also clear that we Americans could stand to learn a lot from them and that our children would benefit greatly if we adopted similar policies and practices. 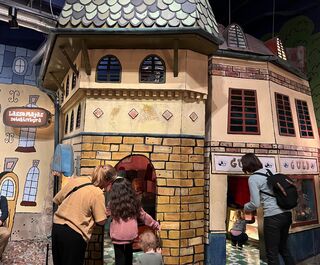 I believe that American children would gladly lay down their devices – as ours did in Sweden – in favor of outdoor play – if given the time, space, and regular opportunities to do so.