It’s been a big week. I’ve hopped on a plane, delivered training to an auditorium packed with parents wanting to know how to dial down perfectionism in their teenage daughters, and spoken to mums in Boston worried about how best to parent during extreme circumstances (eg, what to do , what not to say, how much crying and fear is too much).

Like so many of you, no doubt, I’ve also cooked meals, talked to the kids, walked dogs, folded washing, done a pitiful amount of exercise, and slumped on the couch to watch average TV. Unlike you, I suspect, the highlight of my week came when I was privileged enough to sit a while with my dear friend’s recently deceased mum, Sally.

Yes, you did read that correctly. Yesterday afternoon, friends and loved ones were invited to sit with the family and say goodbye to their dear mother in person, face to face. I know for many of you this idea will feel shocking, unthinkable, and perhaps inappropriate. I know because I once felt the same.

Twenty-two years ago when my own dear mum was dying, my sister returned to our family home in England to look after her, and we made ourselves discuss funeral arrangements. I will never forget the shock I felt the moment she said, “After she’s died, I’d like to bring her body home.” What?! My sister, Esther, was already living in New Zealand at the time, so she’d witnessed firsthand the traditional practices of the indigenous Māori people.

In many cultures, it’s common practice to bring our dead home.

For many families here in New Zealand, where I now live, it is important to bring the body of the dead back home, or to their Marae (meeting place) for Māori. Friends and family gather, bringing food, flowers, and candles; they sit with the dead and share stories and prayers. Usually, the casket is open so they can and do talk to the dead. I know there are many other countries where this is common practice. My long-time collaborator and colleague, Dr. Denise Quinlan, recalls bringing her Dad home in Ireland: “We drank tea beside him, held his hands, and kissed him goodbye, the number of visitors to the house who stuffed money in his breast pocket for a pint in the afterlife bordered on the comical.”

With the body back home, it is common for people to come and visit, drink tea, and show their support.

Back in 2000, however, this was all new for me. Once I’d overcome my initial misgivings, my sister, brother, and I all agreed that we would bring Mummy’s body home, but, as I wasn’t yet convinced I wanted to actually see her, we set her up in her bedroom and shut the door. I’d never seen a dead body at the time—it is not The usual practice in England—and we had small children in the house. I was scared for myself and worried about them.

There are unexpected benefits of having time at home with your loved ones.

Ultimately, I did pluck up the courage to venture into her room. I drew up a chair and tentatively sat down beside her. I’m so glad I did. Dread was replaced by love, fear by facts and knowledge. I now knew what she actually looked like dead, could not deny that she really had gone, and I was able to make sure she looked as she would want to, and that her hair and clothes were in place. In time, I plucked up the courage to stroke her hair and added special photos to the coffin, for her to take with her. By the time she was carried into the church and the coffin moved past by me, I remember turning to it and almost smiling. The dreaded mystery that had surrounded death all my life had finally gone; I felt more confident, more at peace, and calmed by the knowledge of what lay within.

I know now, 22 years on, how formative that experience was and how fortunate I was to have it. You see, when our own dear daughter was killed, back in 2014, there was never a doubt that we’d bring her body home. We couldn’t bear to think of her lying alone and cold in the morgue; we were desperate to bring her home the second we were allowed. Our 12-year-old daughter made her last journey home three days after her death (I think; in truth, it’s all a bit hazy now). She was carried down the stairs to her bedroom by her father, her brothers, her uncle, and her cousins. There she lay in her coffin, placed on her bed, for four precious days. We kept the casket open, so that she was there plain to see.

During the time we had her home I’d guess that more than a hundred people from our community came to see her. Some stood cautiously at the door, many sat for hours, and some lay down beside her stroking her hair, holding her hand. Given she was only 12 herself, many of her visitors were children. Because we live in New Zealand, their parents didn’t think it odd, morbid, or shocking. Instead, they knew that it would help answer their questions and enable their shocked brains to process the fact that dear Abi really was dead. They drew pictures and wrote poems they placed in the coffin beside her, they played guitar, sang songs, lit candles, shared memories of her in a special book, wrote on her desk in felt pens, and talked to her and about her. Given time and the opportunity, some of them even dared to voice their questions, my favorite of which was, “Does she only get to take that one outfit up to heaven?” 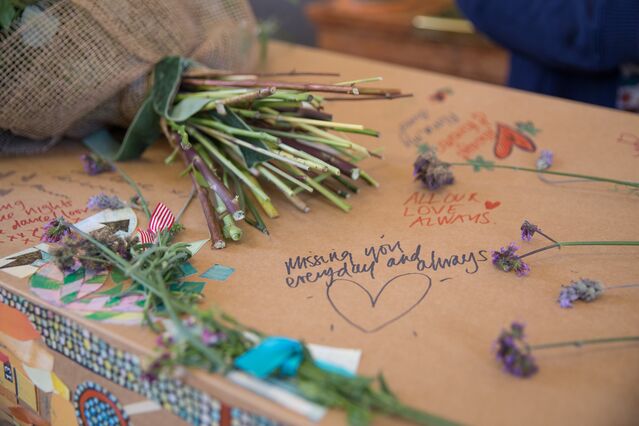 Letting children draw pictures to put in the coffin or draw on it can help de-mystify death and let them feel included.

More than anything, it gives everyone who cares the precious gift of time.

Bringing Abi home was a game-changer for my grief. It gave my poor, traumatised brain time to start to believe that she’d really gone. Yes, having her there was terrible, but it was also beautiful. At nights I’d sit with her sometimes, in her room, just the two of us. I read to her, added special things to her coffin, plaited her hair, and put her favorite body lotion on her long skinny legs. If this is too much for you, then I’m sorry. Death is too much. But, for me, all this helped me feel calmer, making me feel I had some precious time before she was hastened away, never to return again.

And so, when I stepped into the room at our friend’s house yesterday, with trepidation in my heart and tears in my eyes, I wasn’t surprised by the sense of calm that descended upon me. In my own small, indirect way, I loved this woman—for who she was, her incredible advocacy for youth and Māori in particular—the way she was always there for her large tribe of children and grandchildren, the way she’d embedded her indigenous knowledge and practices with them all, so that they will outlive her physical presence on this earth. She has left such an honorable, elegant legacy, I felt honored to be able to say my goodbyes and to bear witness to her family’s loss. Together, we felt like a community, united in grief, our physical presence a reassurance that we see and feel their pain.

I’ve written much more than I ever intended to about these experiences, I’m sure as a reflection of the profound impact seeing these three dead women has had on my life. However, I also write about these precious moments because they make me ponder, and I want to ask you to do the same.

What have you learned from the experience of death that you want to carry forward? How has it changed you, even in unanticipated, small ways for the better? And what practices and newly gleaned wisdom will you take with you into the future so you are better equipped to cope with loss the next time it shows up in your world?