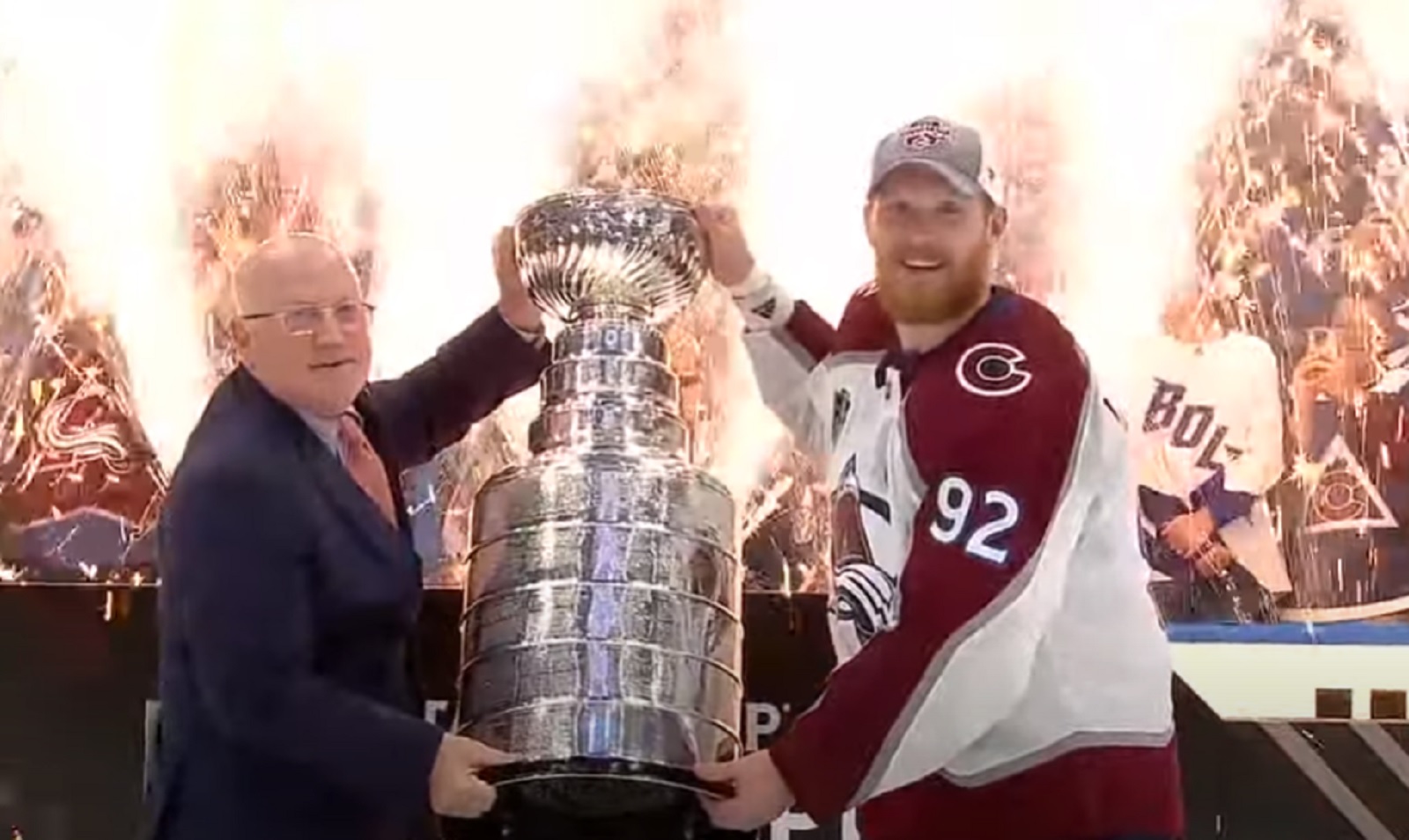 The Stanley Cup was just won by the best hockey team in the National Hockey Leaguethe Colorado Avalanche. They defeated the defending two-time Cup champions, the Tampa Bay Lightning, four games to two. Tampa was vying for three straight titles while Colorado has won their franchise’s third league championship in team history.

So now, the Avs have won their right to spend the offseason celebrating with the cup, each team member traveling and taking vacations with it. Perhaps buckling it into their car seat and going for a joyride, or maybe even simply hanging out at home, having a festive cookout in their backyard with the cup as the special guest. Yes, these things have happened before, even a couple of kids have been baptized in it, believe it or not.

As a winner of the cup, you can practically do whatever you want on your own time with the cup so long as you do not dent it. It’s actually been dented before in celebration but maybe not as quickly as it just was last night, as everyone gathered on the ice to take their first team photos as champions.

Above all that, they will now be a part of hockey history, as each team member will forever find their names engraved on the Stanley Cup.

The Origins of ‘Lord Stanley’s Cup’

The Stanley Cup is regarded by the International Ice Hockey Federation (IIHF) to be “one of the” most important championships available to the sport, “so if the global governing body of hockey – an organization that covers way more than just North America – holds it so high, perhaps it has to be the coolest.

It was first known as the “Dominion Hockey Challenge Cup” and was named after and donated by Lord Stanley of Preston, the Governor-General of Canada, in 1892. Lord Stanley’s entire family promoted the sport during the cup’s early years, laying the foundation. of its current high regard. In fact, to win it, a team had to defeat another club that had the league title. Or, a champion from a separate amateur league issued a formal challenge and defeat the reigning Cup champion in a final game to claim their win. Professional hockey clubs did not play for it until 1906.

On a side note, in baseball, the World Series winner is awarded the Commissioner’s Trophy. The Super Bowl winner gets the Vince Lombardi Trophy as the National Football League champion, named after the legendary Green Bay Packers coach. And in the NBA, the best basketball team wins the Larry O’Brien Championship Trophy, named after the late commissioner of the league. The NHL is the only league whose trophy is named after an actual member of a government.

In 1915, two pro hockey leagues, the National Hockey Association (NHA) and the Pacific Coast Hockey Association (PCHA) agreed to play for the cup. Then in 1926, the NHL deemed the cup the de facto championship trophy until it was formally put on the books in 1947.

With great respect to anyone named Stanley, this trophy is probably the most prestigious and most coveted “Stanley” in the world. But perhaps that’s what also sets it apart from other trophies in professional sports.

And if this thing isn’t the coolest though, it’s certainly the oldest trophy in sports. In fact, it is indeed the oldest existing trophy to be awarded to any North American sports franchise.

And how is that so? Well, in a rarity for all the trophies handed out in North American pro sports, the Stanley Cup is not remade annually for that year champion.

The Original Stanley Cup was not always as big as you currently see it. A copy of the Dominion Cup is technically the top half of the present-day cup. Adding to the prestige of winning it every year was the concept of having the winning team’s members’ names etched into it. So naturally, with every year that passed, more and more space was needed, hence every extra tier that we now see.

In 1924, shortly before the NHL began using it as its championship trophy, the names of the annual winners were engraved on the trophy. Up to 1940, a new tier was added almost every year, with new names. Seven years later, the cup size was reduced but the portions with etched names weren’t equally sized. It was not until 1958 when the cup design as we know it was erected, with each tier sized to hold 13 teams at a time.

Every 13 seasons, a new band of names is placed at the bottom and the top band is then removed and put on display at the Hall of Fame. This system allows for names to stay on the entire trophy on average during a winner’s career and retirement until it rotated out.

And since this particular trophy has been recirculated season-to-season, adding more and more names, with its tiers of precious metal, it certainly begs the question, “How much does the Stanley Cup Weigh?” It currently weighs about 34 and a half pounds or 15.5 kilograms with respect to Canada. This might seem a bit harder to hoist after a player has played roughly 100 hockey games that season and at least 60 minutes of hockey in the game that clinches the cup. But then again, adrenaline and excitement might also make up for all that effort, just saying. It also reaches 35.25 inches (89.54 centimeters) in height and is made entirely of a silver and nickel alloy.

Only the Gray Cup of the Canadian Football League is kept in circulation like the Stanley Cup. There must be something about professional sports north of the border.

More interesting facts about the cup

In actuality, there are three cups in existence. The original Dominion Cup, the smaller trophy that was named after Lord Stanley. The cup that gets presented to the playoff winner, the one that got dented this past Sunday night, is the authenticated “Presentation Cup” and is the one all the team members skate around with after the game, drink celebratory champagne from, take on trips. , place on display at an overseas military base, and whatever else you might respectfully imagine. The third one is the “Permanent Cup” and usually is on display at the Hockey Hall of Fame in Toronto, Ontario.

Since 1915, the Stanley Cup has been won 103 times. Perhaps rather fittingly, the Montreal Canadiens have won it 24 times, the most all-time. However, speaking strictly in the United States, the Detroit Red Wings have won the cup 11 times, the most among US franchises.

The cup actually has its own Twitter account. And after winning it, each team is granted 100 days to share possession of the cup, to be accompanied by at least one member of the Hockey Hall of Fame. Though the cup has been around for over a century, the tradition of sharing it in such a fashion was only thought to have started in 1995, after the New Jersey Devils won it all.

Now that there’s a new champion, it will certainly be fun to see what the Avs will do with such an incredible trophy.