It has become a familiar sight: Two or more people are sitting at a table in a coffeeshop, but they are not looking at each other. Instead, they are all looking at their phones, usually scrolling through a social media feed.

To be sure, many don’t use social media. Some do but rarely. And others who do frequently are not invested in it and have no impulse to check their feed while having coffee with a friend. However, the phenomenon I describe is real and widespread (and it affects people of all ages). What explains it? 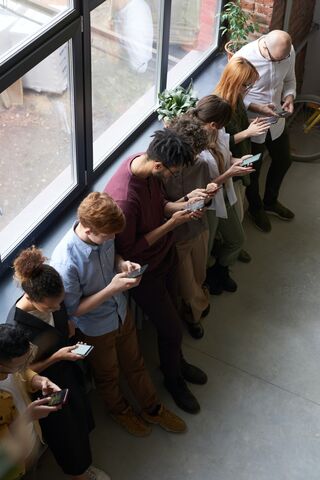 Line of young people looking at their phones

There is probably more than one reason, but I suspect the main one is this: There are generally many more people on a social media platform at any one time than there are physically with you. The audience on an online platform is bigger. If you tell a joke to one or two friends, you will get one or two reactions, but if you post the same joke on social media, you can get a hundred and potentially, many more. It is not that virtual reality is somehow more important to you than the real world: If you were addressing several thousand people in person, that would surely get all your attention. Two thousand people physically present would beat two thousand online users for your attention any day. It is just that it can be difficult for two people physically present to compete with two thousand or twenty,

Can we get validation on social media?

There is probably no straightforward response as much depends on the details. If you are a musician and you post a new guitar composition of yours, or you are a baker, and you post a picture of an elaborate cake you made, and scores of people react positively, that is probably true validation. But most posts are not like that: The intention is not to share news about something you’ve done. The status itself is the product. What of that case?

There is no reason in principle why we can’t get validation for a post, but there are obstacles. For one thing, as a thoughtful middle-schooler noted once, some of the positive reactions we get on social media may be mindless. People may scroll through the feed and click the reaction buttons without reading the posts carefully. “Like” may not stand for actual liking. We react this way to the posts of others, so they probably do it to ours.

Second, there may be a discrepancy between the popularity of our social media persona and our real-life identity. While the two may reinforce each other — I heard from a younger person that it is easier to secure a date if you have a lot of Twitter followers — they may not: One may have a million followers on a social platform but no actual friends. Such a discrepancy may be experienced as a rift. And as healing a rift within the psyche is difficult, one may be tempted to simply identify with one’s “popular” side, taking online refuge from real-world pain.

No less important, it is in the nature of social media that validation is transient. Even if you share something that ends up being very popular, another post will rise to the top of the feed shortly after. An online feed, like the water in a river according to Heraclitus, is always changing. Unlike the friendship of actual people which you may count on for years, including on days when you are feeling down and not clever, the attention of online users, assuming you get it, will quickly shift elsewhere. Social validation online is not an illusion, exactly, but it is short-lived, and must be chased perpetually.

Plato suggested once that what changes constantly is not truly real. This doesn’t seem quite right, but there is something to it. A real friend is likely to be one we have for decades, and a real achievement is one that endures for more than a day. That’s not true of online posts. Indeed. there is a sense in which posts on social media are not meant to endure. They are meant, instead, to have immediate appeal.

Writer Robert Musil detected this trend as early as the first half of the 20th century, when newspapers became very prominent. At one point in his unfinished novel The Man Without Qualities, Musil imagines Plato coming back to life and walking into an editor’s office. What would happen? At first:

If Plato were (…) to prove himself to be indeed that great author who died over two thousand years ago, he would be a tremendous sensation and would instantly be showered with the most lucrative offers. The moment his return had ceased to be news, however …the editor in chief would ask him to submit only a nice little column on the subject now and then for the Life and Leisure section (but in the easiest and most lively style possible, not heavy: remember the readers), and the features editor would add that he was sorry, but he could use such a contribution only once a month or so, because there were so many other good writers to be considered. And both of these gentlemen would end up feeling that they had done quite a lot for a man who might indeed be the Nestor of European publicists but still was a bit outdated, and certainly not in a class for current newsworthiness with a man like, for instance, Paul Arnheim.1

The incentive to share something newsworthy and clickable rather than something of more lasting value is not the only aspect of online platforms that’s relevant here. There is something else, possibly more important: the conversations we have on social media often have the flavor of performance. When you talk to one other person no one else is listening, you have a conversation. You do not perform, unless, perhaps, you are having a job interview or want to favorably impress a romantic interest. When, by contrast, you know that multiple people can see everything you say, that changes things: You begin performing. As Neil Postman once wrote in Amusing Ourselves to Death,

This matters, because when the main purpose of what we say becomes to entertain others, we sense that whatever validation we get, in addition to being ephemeral, is in some sense not for us as the people, but for our play. For our show.

It has been suggested previously that an alarming number of standup comedians suffer from depression. In response to a question about high rates of depression among comedians, comedian Jim Gaffigan says:

There is nothing normal about going onstage and making a crowd of strangers laugh …Stand-up is an endorphin rush probably similar to a drug. It’s also a strange combination of control (you have a mic) and no control (the reaction of the audience).

Much of what Gaffigan says of standup comedy can be said of performance on social media. Admittedly, lack of reaction or of positive reaction would be much less awkward online than in a big room full of people, but the cases are otherwise similar. The attempt to get validation by entertaining a crowd of strangers online may be no closer to real human exchange than standup comedy. There is a similar combination of a big reach and a lack of control over the audience’s reaction. And I suspect that in many cases, similarly too, the negative consequences may prove more lasting than the endorphin rush, the not illusory but certainly quick to vanish successful poster’s “high.”