In the highlands of East Africa, an odd ritual takes place every year. At the end of the rainy season, groups of Jackson’s widowbirds begin to congregate in the grasslands. The males clear out patches of vegetation to construct makeshift dance floors as females gather to watch like judges in a talent show. The contestants then start jumping up and down as high as they can, attempting to outperform one another. The prize is much coveted: If they manage to impress a female, they will get to mate with her. 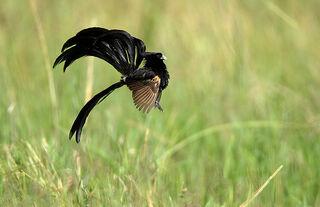 A male Jackson’s widowbird trying to impress a female

Behavioral ecologists have found that female birds base their choices on two main criteria: the length of a male’s tail and the intensity of his dance. Both provide important clues about his fitness. Male widowbirds have tails several times their body length, which are calorically expensive to grow and maintain. A long tail is, therefore, a sign of health and vigor. Similarly, jumping forcefully for extended periods of time demonstrates both strength and stamina. This is known as costly signaling: Traits and behaviors that appear wasteful may be an organism’s way of advertising its qualities.

Anthropologists have noted that human rituals can function in similar ways. People often spend great amounts of time, effort, and resources to participate in public ceremonies that have no apparent utility. By undertaking these costs, they are displaying adherence to the norms, beliefs, and values ​​of their group. A noncommitted member of a religious group would not spend thousands of hours memorizing holy scripts. Those who do must be truly devout. And a serpent handler would not risk life and limb dancing with a rattlesnake unless she really believed she had divine protection.

Indeed, research shows that the message gets through. Those who invest more in practicing religious rituals are perceived by their peers to be more committed to their religion and to their community. This way, performers can raise their status and forge more social connections, and the group can discern the most loyal members. It’s a win–win.

Although a wealth of research has examined the relationship between ritual and social status, one of the key functions of ritual in nature—namely, its role in mating—has garnered little attention. Might human rituals, like those of many birds, help signal their mate value?

In a recent study reported in the journal Current Research in Ecological and Social Psychologywe set out to answer this question.

The study took place on the island of Mauritius in the Indian Ocean, where local Hindu groups practice a medley of ceremonies that range from humdrum daily prayers to extravagant, and often painful, annual festivals like fire-walking and body piercing.

We took pictures of local young men and used them to create dating profiles. We then showed those profiles to young women, as well as to parents, and asked them to pick the ones they found more desirable as potential partners for themselves or for their daughters. Each man was evaluated as a prospective date, as well as potential marriage material.

The profiles contained background information that included the candidates’ ritual habits. In one condition, they suggested that the man in question attended public rituals at the local temple; in another condition, they specifically suggested that he performed the Thaipusam Kavadi, a painful ritual that involves getting impaled with needles and skewers; and in a control condition, there was no mention of ritual. 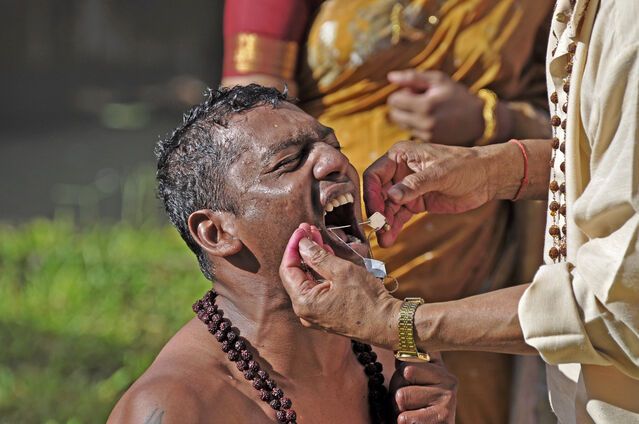 Participants in the kavadi endure numerous piercings and other hardships

We found that participating in public rituals greatly increased the men’s mating value: Men who performed any type of ritual were twice as likely to be top picks. But parents and daughters had different priorities: For the young women, when it came to short-term dating, the ritual did not have much influence on their choices. But when it came to marriage, it increased a man’s chances of getting picked.

Parents, on the other hand, were interested in the ritual commitments of anyone who might relate to their daughters, no matter in what capacity. And, for them, the costlier the ritual the better: Those who participated in the painful ceremony were up to five times more likely to be picked.

Parental preferences matter because, throughout history, close kin have exercised great influence over young people’s reproductive choices by vetting, vetoing, or even imposing marriage partners. In most parts of the world, they still do. By appealing to both potential partners and potential in-laws, these rituals seem to kill two birds with one stone.

Just like avian rituals evolved to signal desirable mating qualities, cultural rituals too may have been the product of selection, allowing humans to gain an edge in the mating game by showcasing socially desirable attributes.