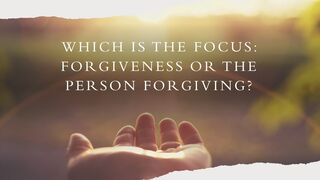 The dangers of judging the appropriateness of moral virtues

If our focus is on the virtue itself, we must then ask the question of all virtues (because forgiveness is a moral virtue), and we can do so by focusing on the question’s opposite: Is justice, for example, as one of the virtues , ever inappropriate? In other words, can you imagine a scenario in which you could be arrested for deliberately being just? If not, then justice is always appropriate, under all circumstances. Is patience ever inappropriate? What about kindness?

I can hear someone saying this: “Well, if someone is beating me over the head with a frying pan, I will not be kind.” My response: You can flee the abuse. You can try taking the frying pan out of the person’s hand. In either case, you can do so without the fury of unkindness or even without neutrality or indifference toward the other.

My first point is this: Because all virtues are concerned with the moral good of human interaction, and because it is always appropriate to exercise the moral good, and because forgiveness is a moral virtue, it is always appropriate to exercise forgiveness. As a further distinction, being appropriate is not the same as being absolutely necessary, A person can choose not to forgive in some circumstances and assent to it in other circumstances.

Now to our specific difference between the appropriateness of exercising the virtue as a virtue and a person’s psychology.

Is it always appropriate for any given person to exercise forgiveness all the time?

The answer here—in contrast to our first answer—is no, it is not always appropriate because a) an offended person may be so shocked by what happened that this particular person is not ready at this specific point in time to offer forgiveness; b) the offended person may need to learn more about what forgiveness is and is not so that forgiveness properly understood is exercised rather than some false form of it; and c) forgiveness is what philosophers call a supererogatory virtue, not demanded by society and therefore not demanded of any one person right now. It is the person’s choice whether to forgive or not on any given occasion. 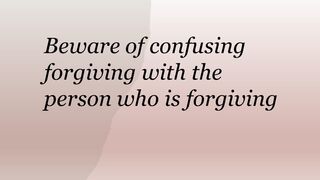 The danger for people is in confusing the appropriateness of forgiveness as a virtue and the not-always-appropriate exercising of this moral virtue by some people now. When people think that forgiveness itself should be considered impossible or inappropriate as a general rule for certain actions by the one who offends, this is giving forgiveness an unjustified bad reputation. This kind of thinking might discourage people from even considering forgiveness as an option, even if they are motivated to do so. This kind of thinking might lead to a condemnation of forgiving as potentiality, a potential in the human heart that must be extinguished, especially under certain circumstances. This rejection of forgiveness as a potential in the human heart would be a diminishing of the potential both to heal emotionally and to grow in one’s humanity. 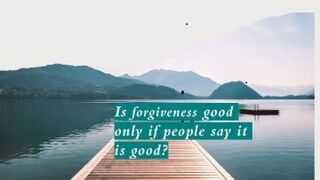 How confusions could block healing through forgiveness

Here is an example of what I mean. A group of us recently sent a manuscript for peer review to a psychology journal. The focus was on female acid-burn victims in Pakistan. Each one of the participants willingly chose to enter a forgiveness intervention and each chose to forgive her attacker, which led to statistically significant improvement in the participants’ psychological well-being compared with control group participants, who had treatment as usual from a local mental health facility.

One of the peer reviewers sternly told the editor that such a study should not be published under any circumstances because no one should forgive acid-burn attackers. The editor rejected the manuscript, and so we went elsewhere for publication (Haroon et al., 2021). The reviewer who strongly recommended the rejection of the manuscript was assuming that all people must not forgive anyone under certain circumstances. This is a confusion of what forgiveness actually is—which is a self-guided choice, in this case to heal emotionally. Were this study not published, it could have blocked people’s knowledge of the healing possibility of forgiveness under this cruel injustice.

If we take away people’s choice to forgive or not, we are blocking their autonomy as persons. The researchers did not demand that forgiveness as a moral virtue be exercised. Each discerned for herself whether or not to appropriate this moral virtue into her healing process. Even if some of the participants refused to forgive (which did not happen in this study), the moral virtue of forgiveness in the context of acid-burn victimization would not be cancelled. This is the case because forgiveness retains its potential to be chosen by some people in this kind of difficult context. 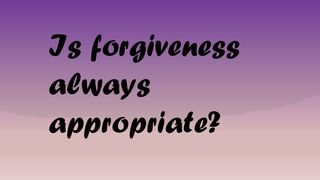 Is forgiveness always appropriate? Yes, if we are talking about the quality of this construct, specifically its quality of being a moral virtue that people are free to choose or to reject.

Is forgiveness always appropriate? No, if we are talking about a particular person’s psychology, including the degree of hurt and the person’s familiarity with what forgiveness is, and the circumstances of the injustice, including its severity, its duration, and the time since it occurred.