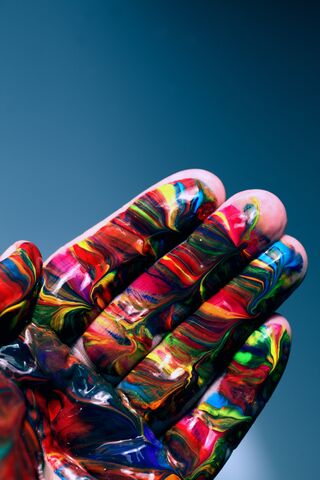 Mania is a state of elevated energy, mood, and behavior that most often occurs in individuals with bipolar disorder, schizoaffective disorder, or those who have taken certain medications or drugs.

Milder mania (hypomania) is typically associated with positive effects like greater feelings of optimism, increased productivity, and/or a perceived boost of creativity.

However, as a manic episode stretches from several days into several months, symptoms will typically increase in severity. They can involve irritability, anxiety, inability to sleep, grandiosity, delusions, hallucinations, increased risk of suicide, and a heightened level of impulsivity that can lead to substance abuse, unnecessary risks, and/or poor financial decisions.

Several years ago, I was diagnosed with bipolar I disorder when I cycled into a severe manic episode brought on by stress from the collapse of my marriage of 20 years, estrangement from my daughters, and alcoholism. In retrospect, I had experienced manic episodes before–I just didn’t know it at the time. But the one that led to my diagnosis was the worst.

Over the course of about six months, my thoughts and actions became increasingly erratic. I slept less and less and would wake up in a pool of sweat. Ultimately, I was only able to sleep for about 15 minutes a night–or, as my therapist said, I was passing out and coming to. I spent my nights either at a 24-hour gym, getting food from 24-hour grocery and convenience stores, or ordering sodas and playing pool at bars until closing time. That last one was also a sign of my altered thinking and impulsivity, given that I was a newly recovering alcoholic.

I also kept notebooks full of reminders, ideas, and sketches. I’ve only recently begun to revisit them–for a while, they triggered too many painful memories. But I’m at a place now where I’m able to go through them as well as other art I’ve created during what I now recognize as prior manic episodes. And it’s been fascinating. 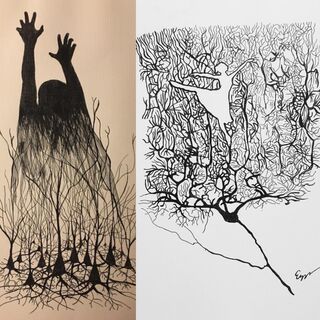 I’ve always had a creative side, but it has never been more apparent as when I’ve been manic.

Figure 1 shows pen and ink drawings incorporating neuroscience elements. On the left, a grasping silhouette emerges and tries to escape from a network of cortical pyramidal neurons. Pyramidal neurons are the primary excitation units of the prefrontal cortex and are also found in the hippocampus and amygdala. Each of these areas is extensively involved in anxiety. On the right, the dendritic tree of a cerebellar Purkinje cell contains a reverse silhouette of a dancer. Purkinje cells are involved in the coordination of skilled movements. 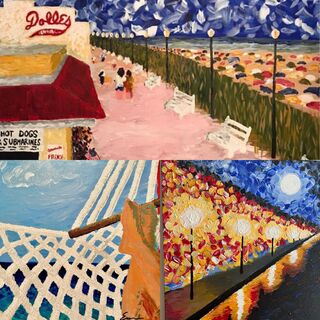 After my divorce and estrangement from my daughters, many of my memories from the previous 20 years were too painful and triggering. So when I needed calming “happy place” memories, I went back further.

Figure 2 (top) shows an acrylic painting of the boardwalk in Rehoboth Beach, where I spent summers growing up in Delaware. The bottom two paintings show a fastidiousness that I don’t usually have when I’m not manic, from the detail in the ropes of a beachside hammock (bottom left) to the colors and play of light in a lighted avenue after an evening rain (bottom right). 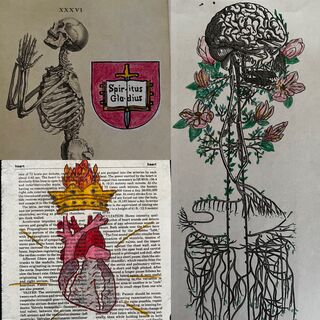 I became fixed on early illustrations of human anatomy that I had first encountered earlier in my career when I taught neuroanatomy to medical and graduate students.

Figure 3 (right) shows a woodcut by Andreas Vesalius from 1543 of the brain and seven of the cranial nerves, in which I envisioned Magnolia flowers blossoming from the branching nerves (I taught and still live in North Carolina).

I modified another of Vesalius’s works (top left) to add Saint Paul’s that showing a skeleton in is modified to include the symbol of Saint Paul with its Latin inscription meaning “sword of the spirit.” Saint Paul was on my mind, as you can read in some of my earlier articles on my manic hyper-religiosity. I was also fascinated by iconography and symbols, as shown in the illustration of a Mexican Sacred Heart on a page from an old medical dictionary (bottom left). 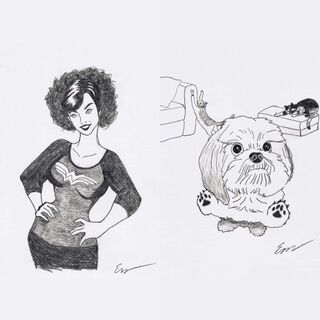 My girlfriend and I have lived together for several years, through the heights of mania and the depths of depression.

Figure 4 shows cartoon versions of her (left) and our menagerie of pets (right).

My notebooks also include notes reflecting my search for answers regarding the symptoms of mania that I was experiencing.

As shown in Figure 5 (top and bottom left), I had narrowed in on chemical pathways driving the production of adrenaline, a/k/a epinephrine. I was also self-aware enough to make note of a drug. I read about that is used to treat delusions in Parkinson’s patients (bottom left). 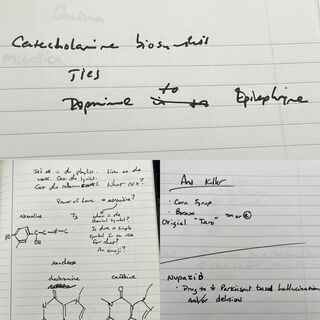 There is also evidence of manic flight of ideas since the same notebook pages also include musings on the similarity of the chemical compounds for caffeine and the theobromine that is the reason chocolate is toxic to dogs (Figure 5, bottom left) and a reconstruction of a recipe for a commercial ant killer that I had once found particularly effective but had trouble finding it on the shelves (Figure 5, bottom right).

Not shown are pages and pages of genealogy research and reconstructions of family history, detailed observations from trying CBD oil for the first time, and a recipe I developed for Pia Colada flavored cannabis bon bons.

Is Mania a Fount or a Bellows for Creativity?

Manic episodes are frequently associated with heightened creativity. Hemingway, Faulkner, van Gogh, Dickens, O’Keefe, and Pollock are just a few of a slew of artists thought to have been touched by bipolar mania. Unfortunately, some artists view mania as the source of their creativity and avoid seeking treatment for fear that they will lose their artistic spark.

But while the incredible energy and grandiose thinking that comes with mania can benefit creativity, mania does not appear to produce creativity out of whole cloth. Mania appears to enhance existing creativity, and depressed episodes suppress it. With medication and therapy, individuals can still be creative without inviting more dangerous symptoms of mania that put their mental health and emotional well-being at risk.