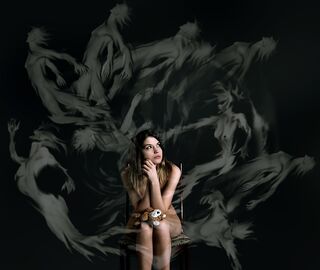 In retrospect, I had experienced manic episodes before–I just didn’t know it at the time. I had been misdiagnosed and treated for depression and anxiety for almost 20 years and was taking medication that can spark manic episodes in those with bipolar disorder.

Mania is a state of elevated energy, mood, and behavior that most often occurs in individuals with bipolar disorder, schizoaffective disorder, or those who have taken certain medications or drugs.

Milder mania (hypomania) is typically associated with positive effects like greater feelings of optimism, increased productivity, and/or a boost of creativity. However, as a manic episode stretches from days to months, symptoms will typically increase in severity.

Along with increased irritability, impulsivity, and inability to sleep, individuals may experience psychosis, which can include delusions (false beliefs) and/or hallucinations (perceiving something that doesn’t exist).

I didn’t experience hallucinations, but I did experience some types of delusions commonly associated with mental disorders. I also kept notebooks during that time full of thoughts, ideas, and sketches that I’ve only recently begun to revisit.

Delusions of reference involve thinking that random events contain a special meaning only for you. 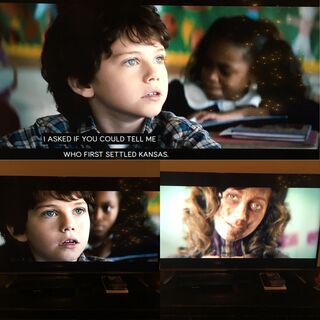 During my last and most severe manic episode, I felt surrounded by signs and patterns with deep personal significance. My phone was full of pictures that I took of television screens showing scenes of movies and television shows that resonated with me.

One series of pictures captures a scene from Man of Steel in which a young Clark Kent has to learn to filter out all of the extraneous sensory information coming in through his superhuman senses (Figure 1). The scene seemed curiously relevant given my own feelings of sensory enhancement, which I’ve written about before. 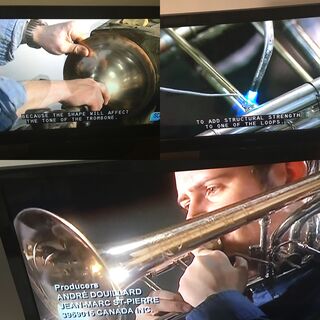 Another series of pictures is of a show I didn’t usually watch about how things are made (Figure 2). I stopped to watch the show, and it oddly included a segment on the making of trombones.

I had received a music scholarship to college playing the trombone and had recently been starting to play again. That had to mean something, right?

Delusions of grandeur involve believing you’re publicly important, a prophet, messiah, or God. Such delusions can dovetail with hyper-religiosity, which I also experienced even though I’ve been an atheist for most of my adult life.

My delusions of grandeur and hyper-religiosity had me thinking I might be a prophet chosen by God or even more. I realized that voicing those thoughts might lead to involuntary commitment, so I resorted to writing them down. 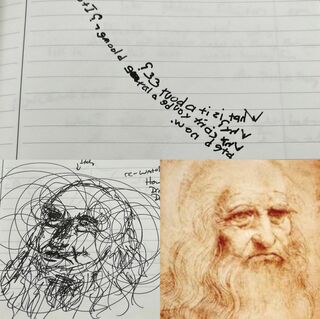 Figure 3 is a collage showing mirror writing and a mirror-image doodle from memory of a self-portrait by Leonardo da Vinci. There may have been some paranoid delusions at play when I decided to mirror my writing, which I didn’t even know I could do.

Although da Vinci famously used mirror writing in his notes, his reason for doing so has been debated. Some say he was trying to make it harder for people to read his notes, thereby providing a layer of protection from those seeking to steal his ideas or persecute him for them.

What I wrote related to thoughts about how many years Jesus Christ had been on earth to learn what it was like to be human and how old I was at the time (late 40s):

What is it about 33? Why? Why can’t you be a late bloomer? It’s more complicated now. 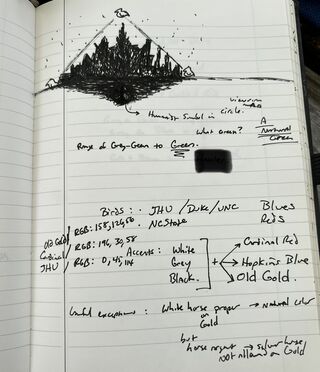 I even started developing symbols and iconography for whatever movement I was chosen to lead (Figure 4). My notes include references to the RGB codes for colors taken from universities I had some connection to, as well as to rules of heraldry. 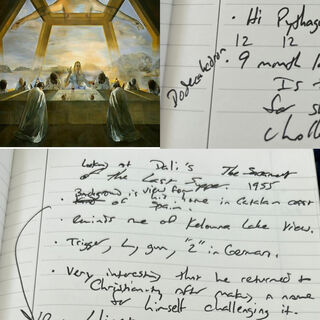 While visiting my parents, I found a print of The Sacrament of the Last Supper by Salvador Dalí (1955) that I had bought on a field trip to the National Gallery of Art when I was a kid (Figure 3, top left). I was fascinated by its symbolism and geometric elements.

The 12 apostles within a dodecahedron, or 12-sided space, which is an ancient symbol for heaven (Figure 5, top right). I even included a rhetorical note: “Hi Pythagoras!”

Since I was revisiting the Catholic faith of my youth, my notes reflect that I found it, “Very interesting that he returned to Christianity after making a name for himself challenging it.” (Figure 5, bottom). And, with a nod toward the delusions of reference mentioned above, I also noted, “Reminds me of Kelowna lake view.” In addition to my partnership with an international law firm, I was also an executive with a company based in Kelowna, British Columbia, on Okanagan Lake. 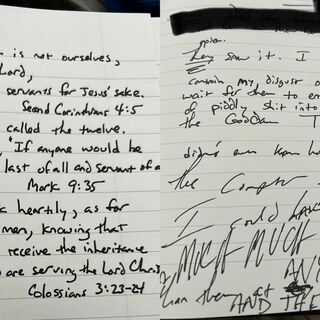 Over time, my notes appeared as increasingly erratic as my thoughts and actions. Figure 6, left, shows part of a page filled with quotes from the Bible from the middle of that manic episode.

Figure 6, right, shows part of a page recalling events from an extremely contentious battle from years earlier with school administrators over lack of compliance with an Individualized Education Program (IEP) for one of my daughters.

Calming the Tempest in My Head

For a while, I resisted treatment. The energy, creativity, and euphoria were, quite literally, intoxicating. Ultimately it was my ability to sleep that led me to listen to the urging of my girlfriend and family and take the antipsychotic medication I was being told that I needed.

I was prescribed olanzapine (Zyprexa) and I responded to it quickly. It helped me to sleep, my grandiose plans and flights of fancy were tamped down, and my “super-senses” and hyper-religiosity subsided. I also gained 20 pounds in a month and had severe muscle soreness, which are major contributors to patient noncompliance.

But instead of abandoning medication, I tried different antipsychotics that produced fewer unwanted side effects. And research in this area continues to advance. In fact, a new therapeutic was approved last year that blunts the weight gain of olanzapine by combining it with a novel µ-opioid receptor antagonist.

I encourage anyone who sees themselves in what I and others have written about mania to listen and take the medication.