Felix (name disguised) was a well-mannered inmate who made it to minimum security to get on a work crew. I was asked to check in with him because he was getting unusually agitated toward staff who demanded he take a pop urine test, part of making sure Felix wasn’t accessing drugs while out working. This is what he told me:

They’re sending me back to higher security because I can’t pee for the urine test with them waiting for me at the bathroom door. It’s like when you’re in a public bathroom and someone else is in there, you know? You just get uptight, and it won’t come out until you’re alone. When I had to share a cell, I’d hold it ’til my cellmate left. It was kind of embarrassing to ask him to step out so I could take a leak. Even though the officer here isn’t looking at me going, it’s like a demand to pee for an audience. I just can’t do it.

I was still young in my career, and this was the first I’d heard of this uncomfortable phenomenon, called paruresis, sometimes called a “shy bladder,” being a pervasive issue. It never crossed my mind that this “slow to go” experience that I had heard joked about, and even experienced myself a few times, was associated with anxiety and could be debilitating for some people.

As readers will see, paruresis is simple in definition—an anxiety-driven inability to urinate in the presence of others—but may be complicated in terms of differential diagnosis, and certainly the havoc it wreaks upon those pervasively afflicted.

Etymologically, paruresis means an abnormal, or defective, urination process. It affects males and females, but the former accounts for the vast majority of cases, possibly partly due to genitourinary anatomy differences (Kuoch et al., 2019). While surely a condition that has existed for as long as humans, this mysterious inability to void was historically chalked up to, for example, in the Middle Ages, spells cast by enemies (Williams and Degenhardt, 1954).

References to it as a research topic, or at least investigation into psychological roots, following the timeline of the references listed on the International Paruresis Association’s Web site, does not seem to have been broached until RE Wobus, in 1922, penned Notes on the Psychic Influence on Bladder Disturbances in Women, A few other scattered papers followed, and then, in 1954, researchers Williams and Degenhardt published Paruresis: Survey of a Disorder of Micturition, It was here we first see the term paruresis instead of some derivative of psychogenic urinary retention. These authors opined that paruresis was a preferable term because it can not get mistaken for enuresis or anuresis, the loss of urinary control, or a more general term for lack of urine production, respectively.

Kuoch (2017) explained the terminology nuance between psychogenic retention and paruresis as the former relates to cases like Felix, a “pee performance” matter, where voiding can occur once there is no audience. The latter is a more dangerous condition, a general retentiveness, audience or none, sans a contributing medical complication, that can require catheterization. While not described as such by Kuoch, this sort of psychogenic genitourinary complication would likely be significant of somatoform disorder. This diagnosis is marked by pain or bodily systems impairments, usually in the absence of any contributing medical condition, believed to serve as an expression of internalized conflict.

It has only been in the most recent decades that paruresis research, and an associated condition, parcopresis, the defecation equivalent, has gained momentum. In fact, outside of Kuoch and colleagues (eg, 2017, 2019, 2021), little information exists on the prevalence of paruresis, which they have consistently reported ranges roughly between 3 and 16 percent of the population. Though they did not discuss the 13 percent spread, it might be surmised this represents the degree of pervasiveness, from debilitating to the very occasional experience, respectively.

As to the development of the condition, like social anxiety disorder, some early, embarrassing, or otherwise unpleasant consequence of urination/defecation is likely at play. One patient I worked with, who was a socially anxious individual until their mid-20s, recalled that, in elementary school, another boy looked into the urinal he was using and said, “You’ve got a small one.” My patient recalled just wanting to escape, but being in “mid-stream” had to finish, and worried the peer would hear his continued urination and would come back to poke further fun. From then on, he feared that if someone nearby was of a bullying demeanor and heard his urination, given that would indicate he was in the process of peeing and thus exposed, they’d take that as an opportunity to look, and make a snide remark, embarrassing him again. 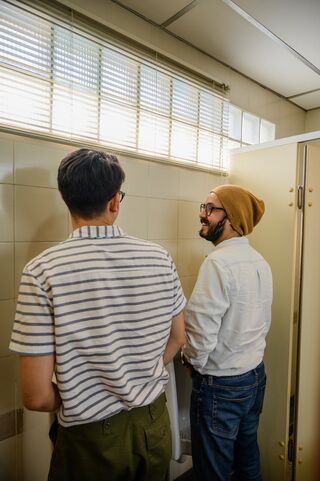 On the most-pervasive end of the spectrum, an inability to void in a public restroom can lead to agoraphobic-like behavior. An agoraphobic person becomes reclusive for fear of not being able to escape to safety if need be while out in public. In contrast, but similar nonetheless, the paruretic person, knowing they may well have to void while out, but that it will be impossible and very uncomfortable, may do little more than leave the house to visit friends or family nearby if they know they have access to a private bathroom, or perhaps go to their job where there is a private bathroom.

From a correctional standpoint, inmates like Felix may be unfairly treated and returned to higher security because it is assumed they are trying to cover for drug use. Renowned forensic psychiatrist Kenneth Applebaum (2005) wrote that the absence of treatment for paruresis or the ability to sometimes void and not others does not rule out the issue. Unfortunately, in cases like Felix’s, staff were quick to assume it was “another manipulative inmate” and such consideration was not given.

Dr. Applebaum continued that such assumptions could lead to coercive interventions, like forcing fluids while the person was under observation, which can cause medical complications. He concluded that alternative methods like testing hair, saliva, or blood were better. Clearly, this is more fair to the inmates, and, nowadays, corrections staff are to place the inmate in a dry cell while conferring with a superintendent on what alternative test to use (Prisoner’s Legal Services of Massachusetts, 2022).

Agoraphobia: People with agoraphobia do not venture far because of their fear of being unable to escape to safety should it be required. People who are limited in movement by paruresis, on the other hand, are responding to anxiety related to voiding with others nearby.

Due to a general medical condition: Some people may have urological complications or be on medications that contribute to an inability to void. A man with, say, a prostate problem, might pee in spurts, which tends to be noticeable in a quiet bathroom, and he begins wondering if the others nearby are noticing the oddity, thus engendering a fear of being scrutinized and leading to an inability to urinate in public places.

Sexual trauma: There is a good chance that someone with a sexual abuse history will feel vulnerable in situations where by private parts are exposed anywhere near others, even if a partition or door separates them, leading to an inability to relax enough to void. It’s therefore important to discern if the paruretic activity is related to traumatic vulnerability or is based in performance anxiety.

Like any good mental health evaluation, it is important, especially when a somatic symptom is at hand, to refer the patient for a full physical examination, as it may be a medical or pharmacological complication that needs addressing. Even if the person has a medical condition that engenders the paruresis, chances are, if the medical condition is improved, the paruresis will subside.

Regarding social anxiety, like most mental health conditions, there is no silver bullet. However, for people whose paruresis is part of a social anxiety profile, like other phobias, exposure therapies have been found to be helpful (eg, McCraken and Larsen, 1991; Soifer et al., 2010; Kuoch et al., 2019). While medication research for paruresis is scant, some researchers have reported success with medications like gabapentin (Neurontin) and the SSRI Paxil (Kaufman, 2005; Kuoch et al., 2019, respectively).

Obviously, if the inability to urinate or defecate is related to sexual trauma, it will likely require addressing through trauma-specific care given its relation to general trauma-related vulnerability concerns. On another note, eye movement desensitization and reprocessing (EMDR) therapy, usually associated with trauma intervention, has been found by researchers like Park et al. (2016) to have some success with treating paruresis.