Before I landed on the USS Constellation in the Persian Gulf, I had never been on an aircraft carrier, but I had seen Top Gun, and I couldn’t wait to meet Maverick.

“You must be Becky,” an F-18 fighter pilot said, as I walked into his squadron’s ready room. “I’ve been waiting for you.”

CNN sent me to cover US Naval operations during the war with Iraq in 2003. I had scheduled an interview with a marine major who was a naval aviator straight out of central casting.

I shot video of the major as he climbed into the cockpit of his F-18 Super Hornet, on the USS Constellation.

Falling for a Fantasy

Single-seat, Super Hornet fighter pilots were at the top of the pecking order. Their missions mattered most. And they knew it. They had a blend of cocky confidence, supreme skill, and faux humility.

“What’s it like to manage weapons and fly the jet alone?” I asked the major.

“Aw,” he said, “I’m just a driver.” As if a 50-million-dollar machine that flew 1,000 miles an hour and fired air-to-air Sidewinder missiles was an SUV with CarPlay and a cup holder.

The major’s forearms bulged out of his dark-green flight suit. He wore anti-gravity gear to keep blood in his brain when his plane pulled 9-G’s, a gravitational force equivalent to 2,000 pounds of pressure. He put a 9-mm pistol in his pocket. “I need it just in case I punch out of the jet,” he said with a smile.

Guys I knew in New York City worked in a coat and tie and carried a briefcase. Their fingers pushed pencils, not buttons in a cockpit that controlled bombs.

The major briefed his wingman, pre-flight. He maneuvered a miniature F-18 on a stick, talking about kill zones and hard decks while I snacked on sweets sent by squadron wives, assembled like a candy buffet.

“Spending six months on a warship can’t be easy,” I said.

“Living on the boat is what we do,” he told me. “As long as I defend democracy, I don’t care where I sleep.”

In some ways, he was Tom Cruise playing a part. And I was an eager audience.

Dr. Geraldine Piorkowski, a retired clinical psychologist who wrote three books on love and relationships, told me that women “have been fed an idealistic view of love” in movies, novels, and imagery.

Maybe I was looking for a man who was a modern-day knight in shining armor who would save me from feeling sad about being single.

“Is that kind of fantasy real?” I asked Dr. Piorkowski.

She laughed and said, “It’s bullsh*t!”

Even if she had told me this before I fell for my fantasy, I wouldn’t have listened. I dove head first into a romantic illusion that was doomed from the start. 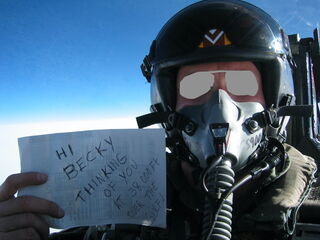 The major wrote me a note and snapped a picture of it during a mission. I fell into a fantasy romance.

A Relationship Built on Secrets

Our courtship was confidential. Neither of us wanted colleagues to know.

“My friends don’t know I’m getting divorced,” he said in a whisper. “Let’s keep our relationship quiet.”

I snuck into his stateroom when his roommate worked out.

We met up for midnight snacks and tiptoed onto the flight deck with night-vision goggles. We did more than look at each other as thermal images captured by infrared light.

We ate dinner in the mess hall but never discussed his divorce or any other sad subject in detail.

I had good reason to fixate on a fantasy. A few years earlier, I had been engaged to a guy who called off our wedding. Rejection was my open wound. I was desperate for a Band-Aid and a hero who would heal me. 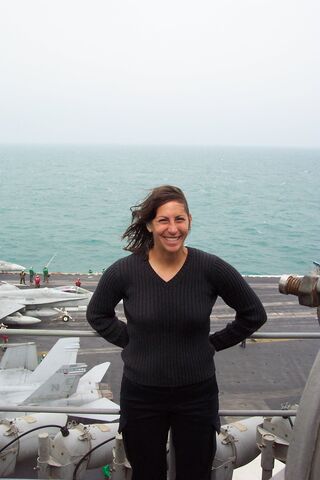 From Jilted Bride to a War Hero’s Wife

After four months, I went back to New York City.

My best friend threw me a welcome back party. The major came and stole the show.

The major deployed to Europe, and I reported on politics and wars in Iraq and Afghanistan. We met every few months in Paris, London, and other European cities with cobblestone streets and good coffee.

We eventually moved to an apartment in Washington, DC He paid half the rent, but his clothes took up a smaller fraction of the closet. He traveled for work. A lot.

He slid a ring on my finger. We exchanged vows.

I didn’t mention that a month after saying, “I do,” I discovered a woman’s headband in the backseat of his car.

I refused to believe that our fairytale would be a nightmare.

On a Sunday morning in October, I made an online purchase, and a nearby, but unfamiliar address popped up at checkout.

I drove to that address knowing what I would find. I was not the only woman in the major’s life.

I confronted him and confirmed what I had suspected but had been too scared to say out loud. Deception. A double life. A house of cards that crashed. He was a fraud, but I was not blameless.

“How could you, I screamed to myself a few hours later.

After a few months, I discovered that something I had feared, being single at 40, made me feel brave.

I quit my job as a local reporter in DC and searched for work in New York City. A friend told me about a job opening for a producer at Fox News. It was a step down from reporting and wasn’t my ideal work environment, but I applied.

“I want to shoot video and edit my own stories,” I told the New York bureau chief in an interview.

“Let’s try something new,” I told her. “I can create compelling content.”

She gave me a camera kit and access to a car, and I traveled across the country, profiling people who overcame obstacles and became real-life heroes. In each story, they cried tears of joy and sorrow.

“Your pieces have so much emotion,” my boss said. “People are so honest and strong.”

Dr. Nicole Weiss, an associate professor who studies stress and adversity at the University of Rhode Island told me that people who experience trauma often emerge “stronger than they thought they were.”

“Maybe you’ll have a third wedding that was!” a friend said. 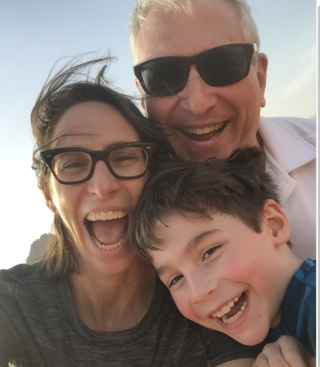 Family picture, 2019. A messy journey can be beautiful.

Can Being Broken Make Us Whole?

I decided to date and focus on feeling authentic.

I had two great dinners with a guy who was 16 years older and had two grown kids. He wasn’t sure he wanted more.

“I understand,” he said. “Let’s see if we can figure it out. I think we may have a future together.”

A year later, Jamie and I married. Two years after that, we had our son.

I had never told Marty that I was married before I met his dad, but that stopped feeling right. When Top Gun: Maverick opened earlier this month, my first marriage was on my mind, so I told Marty about the major.

“Did you love him a lot?” Marty asked.

“Then why did you divorce him?” he asked.

“He wasn’t the person I imagined.”

“Why didn’t you know that before you got married?” Marty asked.

“I think I did know, but I wasn’t honest with myself.”

“Well, mistakes make our brains grow,” he told me. “And now you love Dad and have me!”

I asked Jamie to watch Top Gun: Maverick with me. “Do you think that’s a good idea?” he said with a chuckle. “Don’t worry. I’ll remind myself that Maverick is fiction,” I said. We sat in a large theater, in comfy chairs, and took a two-hour vacation, watching Tom Cruise and an all-star cast give us the chance to feel, for a moment in time, that anything is possible. It’s fun to fantasize, but, take it from me, reality is better.

Do fairy tales, heroes, and happy endings exist? I think they do, but only when we embrace reality. Painful and difficult experiences can give us the chance to create our own heroic moments, with narratives of courage, resilience, and inner strength.