Like many young adults who haven’t mastered time management, I can remember staying up into the early morning hours cramming for finals in college. The next day, I’d be exhausted—and I’d also be starving.

I’ve continued to notice that how much I sleep seems to affect how much and even what I eat (grilled cheese sandwiches were a favorite when I was sleep-deprived caring for infants), but I was never sure if this was just something I experienced or a more universal phenomenon. As I work on my next book, The Body Image Book for Life (which includes a discussion of both sleeping and eating habits), I decided to confer with Lisa L. Lewis, author of The Sleep Deprived Teen,

Studies that have identified predictors of health across time consistently point to the importance of our eating, physical activity, and sleep habits. However, altering any of these health behaviors has been found to be incredibly difficult, requiring several committed attempts before any sort of behavior change sticks.

What is not discussed often enough, however, is the extent to which these health habits are linked to each other. Making positive changes in one health behavior may make it easier to make positive changes in others. For example, it’s possible that getting in the habit of sleeping just one or two hours more per night may have a positive effect on your ability to maintain other salutary habits.

When You’re Tired, You Eat More

Eating is an important health behavior that we engage in several times across the day and there are multiple reasons why exhaustion may lead us to eat more.

For some people, depleted reserves of self-control around tempting or indulgent foods may be a result of sleep deprivation; that pizza may be irresistible without the energy or will to make a salad. One study even found that people are more likely to snack more often when they’re tired. This may be because more energy (ie, food) is needed to sustain wakefulness.

Lisa Lewis describes a more physiological explanation in The Sleep Deprived Teen, Relevant research examines two hormones important for appetite regulation: leptin and ghrelin. Adequate sleep is needed for leptin and ghrelin to function properly—and although it remains something of an open question exactly how much sleep deprivation disrupts their functioning and leads to direct effects on appetite and food choice, it seems clear that appetite regulation can go awry following even one night of poor (or no) sleep.

When you aren’t well-rested, you may not only eat more, but you may crave sugary, fatty foods such as ice cream. In a state of exhaustion, your body wants easily accessible sources of energy, but not necessarily nutrient-dense foods.

Recent research has even found that people who sleep lighter and wake more often are more likely to have lower fiber and higher fat and sugar diets. Lewis notes that in one study of teens in the US who were sleep-deprived five nights in a row, sleeping just six and a half hours each night, their sweets and dessert consumption increased by 50 percent.

Of course, there is nothing wrong with enjoying some ice cream, French fries, or burgers. But it stands to reason that if your food preferences are possibly being driven partly by exhaustion, it may be a good idea to aim to get in bed earlier. 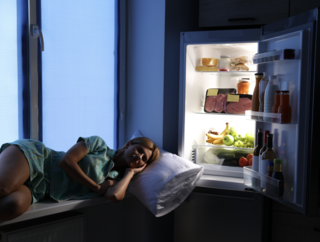 When You’re Tired, You Reach for Caffeine

The average American adult consumes two to three caffeinated beverages per day. Morning coffee consumption accounts for a large portion of adults’ caffeine intake, but about 80 percent of teenagers consume caffeine, too.

Caffeine has a half-life of five to seven hours, meaning that it can affect our bodies for most of the day. And caffeine intake—especially later in the day—has the potential to perpetuate a cycle of going to bed too late, not getting enough sleep, not feeling well-rested in the morning, and consuming more caffeine. This cycle may also contribute to eating more and less nutritious food habitually.

And It’s Hard to Be Active When You’re Tired

If you are tired, the last thing you’re likely to want to do is engage in any sort of strenuous activity. Physical activity is often viewed as one of the most integral contributors to health across the lifespan, but it must be fueled not just by our dietary habits but by the restoration we experience when we sleep. In Lewis’ book, she describes how professional athletes have come to view sleep as a competitive advantage.

How You Eat Affects Your Sleep

A large Thanksgiving dinner may provide some of the most obvious evidence of how our eating behaviors affect our sleep. Many of us want nothing more after our Thanksgiving meal than a nap. The tryptophan found in turkey is often blamed for this sleepiness, but tryptophan (an essential amino acid) and melatonin (a hormone implicated in sleep regulation) are actually plentiful in a variety of foods including poultry, fruits, vegetables, eggs, dairy, and legumes. Consumption of these foods has been implicated in healthy sleep habits. In other words, what we eat day-to-day affects how well and how much we sleep.

Our fast-paced culture often devalues ​​sleep while elevating the importance of productivity in the search for health, wealth, and wisdom. However, without adequate sleep, we’re unlikely to experience health, as is becoming increasingly evident in research that examines links between our sleep and eating habits.

So the next time you find yourself tempted to keep binging on your favorite show at night, remember that getting to bed instead will not only leave you better rested but potentially healthier in other ways as well.