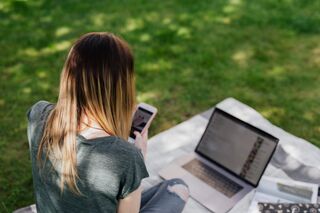 How many parents struggle with their teen’s dependency on their cell phone (aka the internet) and specifically social media platforms? This is a growing concern not only in families but among educators and therapists. Access screen time has been linked to an increase in teen depression, anxiety, stress, and poorer mental health overall.

More troubling for parents is new research just released from the Lifespan Brain Institute (LiBI) of Children’s Hospital of Philadelphia (CHOP) and the University of Pennsylvania and published by JAMA Open Network, which shares that cyberbullying has a stronger impact on adolescent victims than traditional bullying. This includes young people being at higher risk of suicidal thoughts and attempts.

Suicide rates among children have been steadily rising. According to the CDC, suicide was the second-leading cause of death among individuals between the ages of 10 and 24 in 2018.

“At a time when young adolescents are spending more time online than ever before, this study underscores the negative impact that bullying in the virtual space can have on its targets,” said senior author Ran Barzilay, MD, Ph.D., an assistant professor at LiBI.

“Given these results, it may be prudent for primary care providers to screen for cyberbullying routinely in the same way that they might screen for other suicide risk factors like depression. Educators and parents should also be aware of the substantial stress bullying in the cyberworld places on young adolescents.”

Studies show that the use of smartphones and other portable devices with screens affects the quantity and quality of sleep in children and teens. Adolescents are likely restless because they anticipate receiving texts and social media messages from friends, which affects their nighttime routine.

Some children even wake up in the middle of the night to check texts or social media. Sleep disturbance in childhood is known to have adverse effects on health, including poor diet, obesity, weakened immune system, stunted growth, and mental health issues.

In a University of Buffalo study, nearly 15 percent of US high school students reported being bullied electronically. At severe levels, depression may lead to disrupted school performance, harmed relationships, or suicide.

It’s no secret: Parents are at their wit’s end while their teens (or tweens) are hooked to their devices. We are now at a point where if a parent attempts to remove (or even threatens to remove) their phone, they risk a firestorm in their home. Teens become angry, and some may even destroy property (such as punching holes in the wall) when they fear losing their digital connection.

Here are some ways to try to take back control:

1. Smartphone contacts: Cell phones are a privilege, not a right.

It’s never too late to create a smartphone and device contract with your teenager. Another example of a contract is a technology agreement, courtesy of Cyberwise. This contract and/or agreement outline the expectations of the parents, as well as the rules and responsibilities of using their smartphones. With this, the teens/kids have a clear understanding of the guidelines for using the phone and the consequences when they break the rules.

2. Modeling smartphone behavior: Do as I say and as I do.

Many experts say it’s not only about monitoring but more about mentoring— the reality is, it’s more about parents modeling smartphone behavior. These teens already have their heels dug in. Mom and Dad need to start modeling good digital behavior.

For example, if you are a parent who is constantly checking their text messages or on social media, what message is that sending your child? If you bring your phone to the table for mealtime time, what example does that set? When speaking to your friends, are you also glancing at your screen? Do you leave distasteful comments online? Do you overshare on social media? Do you text and drive?

Studies have shown that you are your child’s biggest influence, It’s time for parents to rethink how they use their smartphones too.

3. Lights out, screens out.

It’s time to purchase a lockbox. A simple purchase that can literally change your teen’s life and help them develop healthy sleeping patterns again.

How many times have you awoken to your teen scrolling down their screens at 2 or 3 am? It’s not enough anymore to simply say it’s 10 pm time to turn off your phone. Whatever time you have designated in your contract/agreement is the time that phones are locked-up until morning. Having a good night’s rest will not only improve mental wellness but will also likely help your teen’s academic performance and overall mood.

In conclusion, limiting your teen’s screen time not only curbs their exposure to cyberbullying but also helps them become healthier, both emotionally and physically. Supportive parenting has been proven to reduce online hate with young people, including providing them with tools to handle cyberbullying.