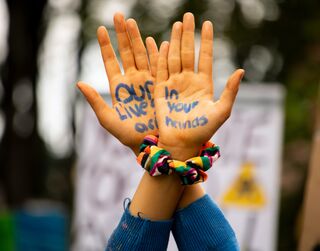 The recent overturning of Roe v Wade by the US Supreme Court provides another example of polarization in America. From media reports to public demonstrations, it seems like both sides want to state their positions in the most absolute terms possible. Some state, “All that matters is a woman’s control over her own body.” Others argue that “The only thing that matters is the life of the unborn.” Although moderates on the issue recognize that abortion is really a “two-body problem” (as did Roe v Wade itself with the mother’s rights yielding to the unborn’s rights at the point of viability), the most vehement on this issue can only see it one way.

Moral Attitudes are Difficult to Change

Absolutist messages, no matter how strong or heartfelt, are unlikely to sway people to consider the other side. One reason people are so difficult to influence on abortion is that, regardless of the side taken, the issue is seen as a moral one, and opinions on moral issues are notoriously hard to change. If abortion is seen as involving matters of right and wrong, how can people change their views? Indeed, even simply suggesting to people that their attitudes are based on morality increases intransigence.

Thus, we wanted to investigate if there was a way to influence people’s morally based views. Some prior research showed that using moral arguments can have some effect, but it can be difficult to get people to see the morality of the other side as doing so would involve abandoning cherished values. But is there some technique that would make people more receptive to seeing at least some merit in a side other than their own? We conducted several studies to investigate this issue.

The Norm of Reciprocity

In brief, our key question was how to appeal to people who hold their views based on morality. We reasoned that because moral opinions are so valuable to people, they would be particularly appreciative of someone who provided validation of their stance versus someone who said they were completely wrong. Then, because of the moral norm of reciprocity, if someone acknowledges some value in your viewpoint, you would acknowledge some value in theirs. Importantly, we hypothesized that this acknowledgment should be most effective for those who were the most entrenched in their attitudes because such individuals would value the acknowledgment most.

In several studies using different controversial topics (eg, gun control, mask mandates during COVID-19), we first measured the extent to which people saw their attitudes on the issue as morally based (eg, from not at all to very much). Then, they received either a completely one-sided message (only providing arguments contrary to their position) or a two-sided message that provided the same contrary arguments but also provided at least one credible argument in favor of the recipient’s position. For example, for the pro–mask-wearing message given to anti-maskers, in addition to explaining why this was a good policy (eg, it can stop asymptomatic carriers from spreading the disease to the vulnerable), it is also acknowledged that people can reasonably oppose a mandate because it interferes with people’s freedom.

In short, we showed that when aiming to influence the views of those who were most morally committed to their viewpoint, acknowledging some merit to their position was more effective than only presenting strong arguments on one’s side (ie, the typical persuasive communication). In some studies, we also examined the nature of the acknowledgment. We found that to be effective, the acknowledgment must be credible. That is, you need to recognize at least one strong point on the other side. If you acknowledge the other side but present only weak arguments, it doesn’t work.

Given that abortion is a moral issue for so many people, as the debate about it shifts into state legislatures and to Congress, moving away from the extremes and toward a compromise position will likely require a new approach. We suggest an effective strategy is to sincerely recognize at least some merit to your opponent’s position.