The most common events likely to trigger negative emotions (for example, anxiety, fear, sadness, disgust, anger) in people with eating disorders are the following:

What are the changes in eating disorder features associated with events and emotions?

Figure 1. The changes in the eating disorders feature triggered by events and emotions

What are the mechanisms responsible for this association?

The principal mechanisms responsible for the association between events, moods, and eating are the following:

When to address events and moods?

Enhanced cognitive behavior therapy (CBT-E), an evidence-based treatment for all eating disorders, assesses whether events and moods contribute to the maintenance of the eating disorder after having helped the person adopt a regular eating pattern in the first stage of the treatment . If so, they need to be addressed directly and effectively. This mechanism is recognizable when there are repeated deviations from regular eating or planned meals and snacks, which can be traced back to external events or changes in mood. These deviations may manifest as recurrent binge-eating episodes, skipping meals and or snacks, and or repeated episodes of self-induced vomiting or excessive exercising.

How are addressed events and emotions influencing eating?

However, improvement in mood is also seen in the context of the CBT-E because of the following changes:

Essentially, the persons are asked to look ahead, at the beginning of the day and every time they eat, to the remainder of the day and try to predict when a problem might arise. When they foresee a potential problem, they should practice problem-solving there and then (in writing) and then act on the solution identified. The following day, patients should review their problem-solving attempts and write the outcome of their using the procedure on the back of their monitoring record. Their therapist will go over their experience with them in the next session.

People with both an eating disorder and mood intolerance often discover that some behaviors characteristic of eating disorders (for example, binge eating, self-induced vomiting, and excessive exercising) can be used to cope with their negative emotions and make them feel better in the short term (see Figure 2). 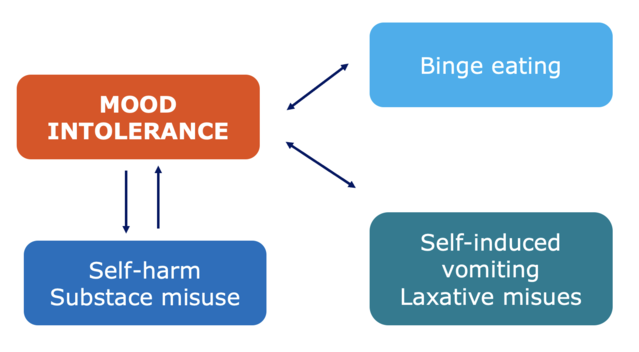 However, such behaviours may also serve to maintain the eating disorder. To successfully treat the eating disorder, mood intolerance needs to be tackled directly by means of an approach that overlaps with elements of dialectical behavior therapy (DBT) (Linehan, 1993) integrated with the procedures of CBT-E used to address the eating disorder maintaining mechanisms.