How do you replace despair with hope, decay with growth, death with new life? Such questions face communities all over the US, from metropolises sprawled around nuclei of dense poverty to rural towns undone by deindustrialization, both often united by the ravages of the opioid epidemic.

Recently, my teenage son John and I had the opportunity to participate in a youth mission trip to Wilkinsburg, Pennsylvania. Our fellow workers and I witnessed firsthand what hope, growth, and new life might look like in a community that most casual visitors might mistake for moribund. Those who had not seen it with their own eyes might well suppose such a transformation impossible. 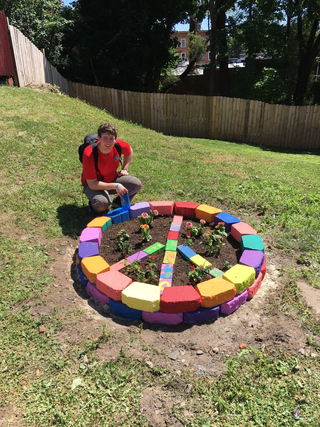 Named after local judge William Wilkins, who served as Secretary of War in US President John Tyler’s administration, Wilkinsburg is an eastern borough of Pittsburgh city covering 2.2 square miles.

In the 1910s, it became the birthplace of broadcasting when local engineer Frank Conrad created an experimental radio station in his garage, transmitting both voice and the music of phonograph records.

From the 1920s through the 1950s, Wilkinsburg enjoyed its heyday, becoming the nation’s most densely populated borough, with thriving schools, houses of worship, and businesses. With the implosion of the steel industry in the 1970s, many residents lost their jobs, and Wilkinsburg’s population soon fell by half.

The first word that might come to the mind of someone walking along Wilkinsburg’s hilly, tree-lined streets is neglect. About half the houses seem to be vacant, with sagging roofs, boarded-up windows and doors, and whole sections of sidewalk buckled by tree roots and covered with dirt and refuse.

There are grand schools and houses of worship, now derelict, overgrown by vines. Their brick edifices remain standing but hollowed out, their occupants having fled decades ago. The high school, which opened in 1911, boasts marble staircases, grand wooden banisters, and an auditorium that could seat 1,500. Yet it closed in 2016 when just 25 seniors walked across the stage at its final commencement ceremony.

Across the street from the shuttered high school is the Christian Church of Wilkinsburg, which served as our group’s home during the mission. Built in 1916 in Georgian style, it features a small but beautiful, naturally lighted sanctuary.

In the wake of Pittsburgh’s contraction beginning a half-century ago, the church’s leaders were advised to follow the lead of other churches in the community and relocate. If they didn’t, they were told, the congregation would cease to exist within three years. Instead, they chose to remain in place, and over the years, a prosperous white congregation has been gradually replaced by a far more economically and racially diverse one.

Kids who graduated from its schools could not get jobs but could make money through crime. Someone would offer a child $50 to keep an eye out for the police. They would offer a teenager $200 to take a bag of drugs down the street. Before long, couriers became addicts. A new sound echoed through the streets: gunfire. She recalls seeing a youth shot in the church’s parking lot. In one 30-day period in 2010, the community lost four young people to such violence.

Our mission group was divided up into teams that included local youth. Some teams focused on landscaping. Others created peace gardens. Still, others painted boards to cover the doors and windows of abandoned homes.

Our team was assigned to “rehab” a house, essentially emptying it of contents accumulated over its long-deceased occupant’s lifetime: pieces of furniture, an assortment of household gadgets, piles and piles of clothes, photo albums, sewing and knitting projects in various stages of completion, and boxes of correspondence. We were like archeologists, excavating a life layer by layer. It was hard work, and we boarded the place up when we were done.

Through this work, we came to appreciate beauty’s vital role in restoring community by clearing weeds, building raised beds, and planting flowers on neglected properties. We were replacing eyesores with gardens attractive to the eye and soothing to the soul.

Where there had been tangled masses of unwanted plants and litter, there were now lovely flower gardens and multi-colored peace signs made of painted stones. Our group erected an eye-catching peace mural on the community’s busiest thoroughfare. Even the boards we used to cover up the doors and windows of derelict properties had been painted by a team of artists.

Equally important, people saw us doing it. Not just a group of strangers from several states away, but youth from the community, working hard in the hot summer sun, hauling dirt and refuse by the wheelbarrow, and climbing ladders to erect enduring works of art.

The local youth were paid–for many, the first job they ever held. And they were paid a bonus if they arrived on time every day, an effort to instill a good work ethic and habits that would help prepare them to find and keep permanent jobs. We were helping to transform buildings and landscapes and catalyze personal transformations, as residents both witnessed and worked with us to enhance their community.

Our teams were multi-generational, including members from the second to the seventh decade of life. Our “rehab” group’s foreman was a community resident in her early 60s who had just completed courses in carpentry and masonry. Our teammates were teenagers.

The young should not be allowed to blame their community’s blight on the bad decisions of their parents and grandparents, and older generations should not lapse into a lament over the fact that young people are no longer what they used to be. A thriving community needs the contributions of all generations, including those who have built up experience and wisdom over decades and those who, by virtue of their youth, have the longest-term stake in the community’s fate.

During our sojourn in Wilkinsburg, we realized there were no quick fixes. Fire can burn down a house in hours, and bulldozers can raise a structure in days, but building up a community takes years, decades, whole generations. Our team labored strenuously for a week, filling two dumpsters with the contents of a house, but our efforts could be no more than a drop in the bucket of recovery.

We were visitors who would not remain. It was not our home, and ultimately, no matter how much treasure government agencies and private philanthropy might pour into the borough, real recovery would require residence–a commitment to remain in place and build a neighborhood by being a neighbor.

Pastor Janet likes to ask, “If your church building burned to the ground tomorrow, would the community around you grieve?” In other words, is the church, the school, the business, the home a citadel, protected by a moat or high and thick ramparts from lamentable things happening around it? Is it surviving despite worrisome trends in its community?

Or is it reaching out to and engaging with its community, pouring out its resources to help enhance the lives of its neighbors? As Wilkinsburg’s prosperity began to ebb decades ago, many congregations chose to relocate to more prosperous communities. One church chose to remain and is the only one that survived.

Today someone driving through Wilkinsburg to get somewhere else might see only neglect. But a visitor who lingers, even briefly, will catch hints of something else. Not just signs of a recent beautification effort but ongoing indications that people–both those from far away and lifelong residents–still care.

Amid deserted schools and churches, their carcases rotting in slow motion, are signs of hope, growth, and new life. To the discerning eye and the open heart, this tiny borough offers an enduring lesson worth broadcasting–great societies are made up of thriving communities, and those who seek to build a great nation must roll up their sleeves and pour their time, talent, and treasure into a community.