After two years of lockdown, a number of conferences and conventions resumed holding live meetings this year. These afforded the attendees with opportunities to reconnect in person and spend time with friends, colleagues, and fellow professionals. A complete one convention this spring, I kept hearing people comment on how easily they fell into the same rhythms with others and yet how paradoxically odd it all felt, both familiar and unfamiliar. Special effects wizard Fon Davis, whose experience includes working on The Nightmare Before Christmas and various Star Wars films, wondered why this might be, and he suggested that neurological changes that had developed over the previous two years might account for some of that. It’s a smart question.

Experience has been shown to alter neural pathways. We often think of neuroplasticity as the brain’s ability to “rewire” itself after injury (Sebastianelli et al., 2017) as new connections form and uninjured parts may begin to take over functions previously performed by those now injured. What is injury, though? Would two years of neglect and reduced activity in certain areas due to lockdown and social isolation count as injury in this sense? Even without injury, could it be that the areas experiencing reduced activity change in other ways during that time – for example, by reassigning some neurons to whatever new routines began to replace old ones? In that case, returning to a previous situation might activate the connections that remain in place while failing to activate synapses that have been reassigned, so to speak.

Thinking of neuroplasticity as “the brain’s capacity to continue growing and evolving in response to life experiences” regardless of injury may be more useful as well as more objective. The brain may also activate conflicting patterns, elements of both old experience and new.

Could such neuroplasticity account for the intense feelings of alienness that people sometimes experience upon returning to old routines and situations? As opposed to the better-known phenomenon déj vu (“seen before”), in which a situation feels strangely familiar even though it should not, jamais vu (“never seen”) arises when something we know to be familiar seems subjectively unfamiliar. It feels “off.” This seems to occur about a tenth as often as déj vu does and in one third as many people. Both occur more frequently among individuals who have suffered epileptic seizures, particularly those associated with temporal lobe epilepsy (Illman et al., 2012; Ko & Kuo, 2018; Kusumi et al, 2006; Sengoku et al., 1997). Both experiences change in frequency with age (Brown & Croft, 2011; Walker-Journey, 2022), growing less common, but it is not known whether that happens because of age-related deficits with age or simply because experience, learning, and crystallized intelligence generally increase. Brain changes tend to get studied after the fact most of the time, limiting researcher’s ability to examine the causes of certain phenomena.

Scholars struggle to explain both, especially jamais vu (Findler, 1998; Ko & Kuo, 2018). Not only is jamais vu the less common phenomenon, it is also more difficult to manipulate experimentally. Researchers can manipulate configurations of environmental stimuli (Clary et al, 2012) as well as the number and types of cues to see how much a familiar scene can be altered before a viewer knows the scene looks familiar without having enough information to recognize why, and this seems to be one of the main reasons that the sensation of déj vu occurs as recognition without identification (Catling et al, 2021; Cleary & Reyes, 2009; Ryals, 2013).

When environmental cues resemble a previous setting just enough to make it feel familiar even though the person has never been there, a false positive recognition has occurred. When the familiar evokes a sense of unfamiliarity, a false negative recognition has occurred. The false positive may be easier to study because it is easier to test why something occurred than why something did not – akin to how we cannot prove the null hypothesis. 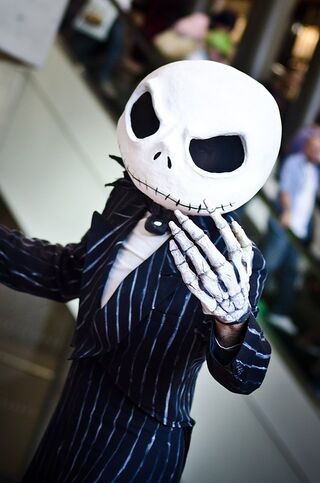 At what point would anyone mistake this guy for Santa Claus?

One more thing plays a role in why two years of lockdown may have caused familiar experiences to seem “off”: Because they are. Differences both little and large have changed our circumstances. The world is still different in many ways. A setting or situation you visit for the first time in two or three years – say, a family reunion – mixes the sensations of familiarity and unfamiliarity. A family reunion in 2022 cannot exactly match what the reunion was like in 2019 because everyone who’s there is three years older instead of the usual one year. If the event carries on as though lockdown never happened, with everyone hugging easily and no one wearing masks, it carries a tinge of new strangeness because it differs from the new norms that developed throughout COVID-19 lockdown.

In The Nightmare Before Christmas, the aforementioned Tim Burton film that Davis worked on, protagonist Jack Skellington impersonates Santa Claus when he wants to experience the fun and joy of Christmas gift-giving. Children throughout the world find the fake Santa Claus to be unnerving because he gets things wrong in unsubtle ways. Jamais Vu works more subtly, which can be additionally unnerving when we do not know why the situation feels wrong and we have trouble trying to articulate our own feelings.