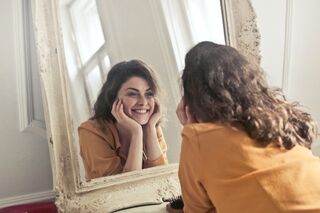 The world would like us all to think we’re self-absorbed, self-obsessed, and just plain selfish.

In fact, it’s quite the opposite. We don’t know ourselves nearly as well as we think (Vazire & Carlson, 2010). That’s not terribly surprising when you consider how little time we spend alone, simply thinking about ourselves (Csikszentmihalyi & Figurski, 1982). Estimates vary, but research finds we spend as little as 17 minutes a day (or just .01%) “relaxing and thinking.” (Bureau of Labor Statistics, US Department of Labor, 2016). Clearly, “me time” is exceedingly rare, but we can’t just blame the fact that we’re busy. There’s more to it.

When researchers gave participants a choice between taking time to just sit and think, or giving themselves electric shocks (that they previously agreed were painful), 4 out of 10 participants (42.9%) picked up the shocks (Wilson et al., 2014). That’s right: Instead of simply taking a moment alone to ponder whatever they wanted (themselves, their relationship, life, etc.), a sizable number choose the shocks. It seems that, for many participants, being alone with their thoughts was potentially more painful than an electrical jolt. With so little time devoted to self-reflection, it’s no wonder that many of us struggle with knowing our self.

When you lack self-insight, you’re missing the whole picture, and not only do you suffer, but your relationship does as well. (Want to know yourself better? See 36 Questions to Improve Self-Understanding.)

What Does It Mean to Know Yourself?

You’ve likely heard the terms self-knowledge or self-understanding used to suggest that someone has a greater level of comfort or mastery over who they are as a person. Researchers call this self-concept clarity, or a person’s ability to hold a cohesive, consistent, clear, and stable view of their self-concept (Campbell et al., 1996). People with greater clarity experience less change in how they describe their self over time (eg, how you describe yourself today will largely match your description in a month or a year). High-clarity individuals are also less likely to hold conflicting views of the self (eg, simultaneously thinking you’re modest and ambitious).

Those who have greater self-concept clarity are more likely to agree with statements such as:

The Benefits of Self-Understanding

Being more clear and confident about who you are has lots of benefits (Emery & Gardner, 2020). For example, those with greater self-concept clarity are less stressed, depressed, anxious, and neurotic. Not surprisingly, they have higher self-esteem, more meaning in their life, greater life satisfaction, and greater well-being. That’s all good, but enhanced self-knowledge is good for your relationship, too.

Those who report greater self-concept clarity also indicate that they have more closeness in their relationships, as well as greater satisfaction and commitment (Lewandowski et al., 2010). One reason greater self-understanding helps relationships is that it boosts self-esteem. Those positive feelings can spill over into a relationship, enhancing its quality.

Because the relationship is better, individuals are more likely to nurture it. When individuals are clearer about who they are, they’re also more likely to invest their time and energy into their relationship (Lodi-Smith & Roberts, 2010). Perhaps as a result, those with higher self-concept clarity have longer relationships (McIntyre et al., 2018). Similarly, married individuals report having greater self-concept clarity compared to those who are only dating. When people are clearer about themselves, they tend to view their relationship as a more important part of their lives (Gurung et al., 2001).

In a relationship, that’s very helpful to your partner. Because you’re behaving more consistently, it’s easier for them to predict how you’re going to feel and act (Lewandowski & Nardone, 2012). When you’re clear about who you are, your partner can more accurately and confidently know who you are. That’s important for your relationship’s quality and longevity because research routinely shows how having an emotional unpredictable partner harms relationships (Fisher & McNulty, 2008).

If you’re clear and confident about who you are, it also helps you see your partner more clearly. That’s important because those who held more clearly defined views of their partner reported less conflict, were closer to their partner, and were more satisfied (Gurung et al., 2001).

Within a couple, partners also blend and merge their identities in a process called inclusion of other in the self (Aron et al., 2013). Taking on your partner’s qualities and becoming more like them can be risky—especially if you don’t know who you are and feel like you could potentially lose part of yourself. However, if you have greater clarity and confidence in yourself, adopting aspects of your partner is not only less threatening, but potentially more beneficial, because those new elements help you grow. (While it’s important to know yourself, having a relationship that grows who you are also critical. See “Is Your Relationship Making You a Better Person?”)