In the first half of this post, I introduced the restaurant game as a way to play with our assumptions about free will and agency. I’ve kept thinking about this game, and playing it, partly because it’s so relevant to eating disorders.

Maybe philosophers often turn to the restaurant example to illustrate why determinism can’t be right because 1) eating is so visceral (foreign bodies getting into my body), which makes it salient in everyday life, and 2) it’s so simple (get hungry , get food, stop being hungry). Both things make it a good candidate for an illustrative example. Then on top of that animalic simplicity, a restaurant menu adds just the right level of added complication.

A menu is a highly structured and mostly predictable kind of complication, a familiar convention with its section headers and its font choices and its strategic pricing. It’s enough to make this eating-food thing feel like a noticeable kind of decision, one with unspoken rules and social signaling galore. And it makes this episode feel like a lot more of a one-shot chance where you can get it “right” or “wrong” than when you’re shopping or looking through the kitchen cupboards, where the timing is less constrained and the choices are much more numerous and include going off-piste by giving up and getting takeout.

For someone with an eating disorder, the viscerality of eating isn’t simple anymore; the small amount of formalization that a menu does to foody decisions may feel anything but lighthearted; the worst-case “right” or “wrong” scenarios may be freighted with a lot more than FOMO and scrounging someone else’s dessert. This may be a reason for you to not play the game if you have an eating disorder that you aren’t well on the way to recovering from. Or it may be a reason for you to think seriously about playing it.

In a long-ago post on “taking, losing, and letting go of control” in recovery, I suggested that letting contingency in is an important part of letting recovery happen (yes, letting it happen instead of or as well as making it happen), and that

The version of the game I suggested then was “Let the decision make itself”:

Pick a specific decision that needs making—whether to watch a film or read a book, or when to cross the road, or what clothes to put on in the morning—and think thoroughly through the alternatives. Then don’t make the decision.

(NB: If you’re still at a vulnerable point in illness or recovery, be careful with this, and don’t choose food-related things, otherwise you risk distressing yourself and compromising your dietary intake. If you’re further along in recovery or post-recovery and feel comfortable doing so, try it with food too: what to cook for dinner, or what to choose at the restaurant. But remember, there’s no point in doing this if you’re still ill enough that there’s no question of you choosing anything other than the least calorific option.)

Or if you want to play the restaurant game despite worrying that you’re not far enough along, another version I do quite often is narrow it down to two options, and then stop, and wait to see what comes out of my mouth when the waiter arrives. That’s less risky.

Or you could set in place a safeguard like: If really nothing happens that looks like me eating anything proper, someone else I trust will choose for me, or I’ll have a standard meal waiting for me at home. This makes sure you get the actual food in. But of course the discomfort of “failure” may still be significant—though then again, you may also learn from it.

In my more recent post on the body and free will, I talked about how the momentous beginning of my own final, successful recovery attempt felt like nothing so much as being carried by momentum that had long been building. It can seem difficult to reconcile this with the equally important fact that the decision to get better is something one needs to grasp with both hands—or else let slip endlessly away, and so watch more and more years be lost to illness.

But in the end, the reconciliation is already there: The decisions are getting made whatever philosophical spin you put on them.

In the same interview I quoted in Part 1, scientist Susan Greenfield expanded out from restaurants to argue for why the sitting back and seeing what happens can’t be a way of life (unless you’re mentally ill):

I believe very much in my own free will. So I can see that you might be, in your Sue Blackmore way, sitting there and saying, “I wonder what she’s going to order” and so on, and that might be quite fun; but I don’t think that every minute of your life you think, “I wonder what she’s going to do”. Well, you might if you have schizophrenia, but I think for most people most of the time, you have to assume that other individuals are acting of their own free will, and that you yourself are a cohesive entity. ,Conversations on Consciousness, 2005, pp. 100-101)

But there are alternatives to all this assuming, and it isn’t just science that makes the “freedom” and the cohesion look suspect (though it does [e.g. Blackmore & Troscianko, 2018, pp. 218-246], direct personal experience can too, if you give it a chance to.

Maybe in the end, a lot of the vehement insistence that free will must exist comes down to a simple misunderstanding of the alternatives. In the textbook I just cited, Sue Blackmore and I quote a scholar called James Miles offering one reason why people get so upset about the non-free will restaurant scenario:

A large part of the problem, he says, is a confusion between determinism and fatalism. Fatalism is the belief that because everything is determined, it is pointless to act. But a determinist, Miles reminds us, will make as many decisions as a believer in free will; the only difference is that the determinist will recognize her decisions as fully determined. In a restaurant,

The determinist will still select the fish over the wood pigeon, he or she just will not cast the runes seeking instruction, offer up a quick prayer for guidance, or invoke this as proof of either God or free will. (Miles, 2013, pp. 214–215)

It’s quite fun ditching the runes—and it can be far more liberating than clinging to fictional kinds of freedom. Let me know what happens if you try it! 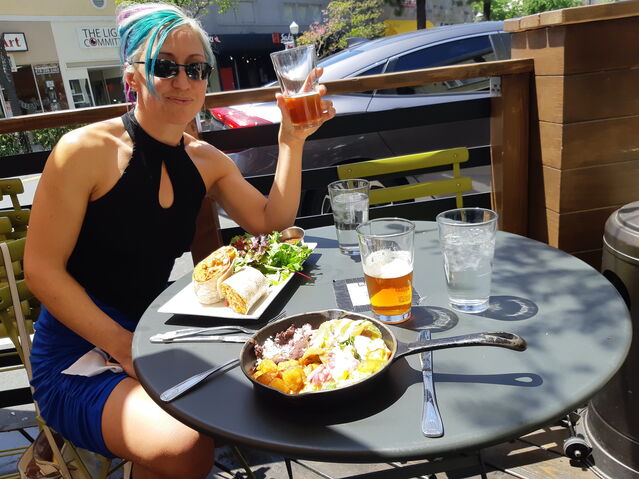