Man is not a rational animal but a rationalizing one.–Robert Heinlein 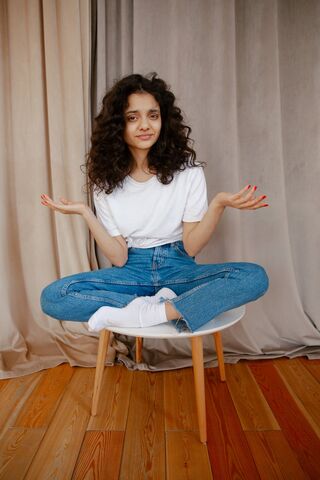 “We got pregnant the day we met.” Brittany was telling me a tale of passion, anger, and chocolate.

She met Joel at Denny’s, where they were on other dates.

Joel suggested going to an ice cream place that had a challenge: if you ate the whole frozen pile, it was free. His date was unenthusiastic, but Brittany loved the idea.

She and Joel abandoned their dates and headed off together to see if he could eat one. He did.

“I like dessert,” he said. He was a thin, 35-year-old cop who was fidgety and intense. His goatee was close-cropped, as was his hair, and he agreed that their relationship was highly charged. “I like her zest for life, and she is a great country line dancer,” he said, “but she is driving me nuts.”

Joelfulness about her messes, forgetfulness, and how she kept bouncing checks. He said, “Our son, Sean, needs help with his school stuff, but she is always forgetting things he needs or is making him late.”

“I work part-time,” Brittany said. “I have a lot on my plate, and I am the one that takes care of Sean and the baby, and you just criticize. You stress me out, so I forget things.”

Joel was quick to respond, “I am just trying to help you. You need reminders, and I tell you to chill because you get so mad at Sean that he gets upset. You are a bad influence.”

“You’re the bad influence,” she countered. “You are critical and always think you know the best way to parent.” She turned to me: “Just because he had kids in his first marriage, he thinks he is a parenting genius. He never even sees them.”

“Well, I know things you don’t,” Joel said. “If you would calm down and try my suggestions, it might help.” Back and forth they went. Brittany accused Joel of drinking too much, and he said it was because of her nagging. At this point, they were glaring at each other and beyond the help of ice cream. They were demonstrating something they were both proficient in rationalization.

To rationalize is to excuse behavior. Rationalizing is deceptive because it is false to argue that actions are reasonable when they are selfish.

When Joel said he was trying to teach Brittany how to parent but was really criticizing her, he was rationalizing. When Brittany yelled at Sean but blamed Joel, she was rationalizing because Joel didn’t make her yell. They excused themselves in many ways.

Once, Joel cut Brittany off when she told me about a fight. He said, “You are rambling. He doesn’t want to hear all that.” He wasn’t protecting me, however; he just didn’t like being told on.

Joel became irked in another session when he discovered that Brittany had treated her friends to an expensive lunch and hid it from him. Her excuse for not telling was that she had forgotten. But her actual reason was that she knew it was a bad use of their money. She liked impressing her friends and felt like she deserved to do what she wanted.

Joel’s default excuse for his criticism was Brittany’s housekeeping. It was an all-purpose justification for anger, drinking, and distancing. However, his allegations did not inspire her to spring clean. They just created new problems of resentment and anger.

She hated being snapped at, so she would ignore messes to stick it to him. Rationalizing fuels conflict and solves nothing, but everybody does it, especially when things get tense.

Have you ever hurt someone’s feelings? Did you claim that your behavior was reasonable given the circumstances? Have you made excuses for not doing something you committed to? Minimized your faults or exaggerated your partner’s? We all have.

I have studied how excuses show up in couple conflict and found they are common and damaging. The partners in my studies were able to admit times they exaggerated their own goodness to blame the other, as one recalled: “I would selectively recall the few times that I [helped with housework] to make it sound like I was doing more than I was.”

Another one admitted: “I have purposefully cried . , , [and sometimes] cry a little bit louder, so he hears me even if I’m in the other room.”

More concerning is how those in abusive relationships blame their partners for their own mistreatment. One’s recollection was typical: “I’d feel horrible about the physical abuse, and then later I would think it might not have happened if she would have just kept her mouth shut.” This man felt bad about hurting his wife but shifted into rationalization to make his violence seem acceptable.

In relationships, it is crucial for partners to honestly take responsibility for their actions, apologize for wrong behavior, and try and improve. Those who blame and make excuses will damage their own integrity and the quality of their relationships.