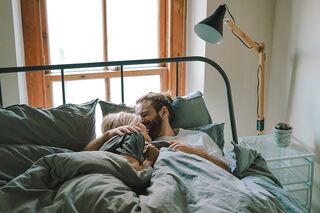 Making your relationship equal outside the bedroom might be a route to spicing things up within it.

In times with an increasing focus on issues related to equality, diversity, and inclusion, one area of ​​life that has been under lower levels of scrutiny than others is the level of comparative fairness within relationships. This is in spite of a raft of social science research showing a disproportionate amount of unpaid household-related work falling at the feet of women. As such, it may be important to consider how the division of labor and other indices of equality within couples play a role in partners’ experiences of their intimate relationships.

What is known is that having more equal relationships boosts satisfaction within couples. Those who divide up household tasks and chores are more likely than those who don’t to report feeling happier in their partnerships and having more gratitude for their partners. However, one aspect of relationships that has not been explored with regard to the role of equality is sexuality and sexual desire. That is, until now.

Low levels of sexual desire are commonly reported in a sizeable minority of women, with up to around 15 percent of women reporting distress as a result of this issue. One model of sexual desire—the Relational and Bodily Experiences Theory by Eugenia Cherkasskaya and Margaret Rosario—posits that there are two facets to consider:

Although these aspects of sexual desire are related, they represent specific forms of sexuality. However, the nature of the interdependence between the two facets has not been explored. According to Dr. Simone Buzwell–an academic at the Center for Mental Health at Swinburne University of Technology, Australia—this is telling. She said: “While a lack of desire is not an issue for all women, a lack of sexual desire does cause significant distress for a substantial number of women and their intimate partners. However, as there has been a deficit of research in this area , the factors that contribute to low female sexual desire are not understood and how these factors impact women’s well-being has rarely been examined.”

Dr. Buzwell and her colleagues have recently published a study looking to explore the role of relationship equality on the two faces of female sexual desire. Speaking of the motivations for this work, she said:

My decision to start examining this area was stimulated when I read: Cherkasskaya & Rosario’s (2019) recent Relational and Bodily Experiences Theory of female sexual desire, which proposes that female desire is multidimensional, consisting of solo and dyadic desire. I wanted to know if this theory would be useful when exploring the factors contributing to low female sexual desire and would provide important suggestions for clinicians working with women in this space.

This research also occurred when the ‘mental load’ for women appeared to be exacerbated in the context of COVID, with women taking on the majority of care activities required in this context.

The researchers conducted an online survey with almost 300 women—all of whom were in a relationship at the time of data collection. The survey asked participants to complete measures of the solitary and dyadic facets of sexual desire, perceptions of relationship equity, and relationship satisfaction.

These data lead to optimistic futures for couples wherein women are experiencing low levels of sexual desire. Thinking about the implications, Dr. Buzwell said: “…low female sexual desire is likely to be a problem that both people in the relationship can solve together. It is not the ‘fault’ of one individual and it would be useful to consider factors beyond the sexual realm that may be contributing.”

As such, it may be that taking the emphasis away from the bedroom and more squarely focusing on levels of power and fairness within a relationship could be the key to bringing couples’ sexual relationships back to life. To sum up, Dr. Buzwell stated clearly: “We hope that it can be recognized that fairer sex is better sex for all.”

The study is published in The Journal of Sex Research.