Our communication strategies are becoming increasingly technological, with many of us speaking with friends and family more using WhatsApp or iMessage than face-to-face interaction. As a part of this, a new lexicon is emerging, one that sees us speak to others using small icons rather than words. We are well into the age of the emoji.

Despite the ubiquity of emoji use, scientific work on their use has been thin. However, a new study led by Dr. Pilar Ferré, an academic based in the Faculty of Education and Psychology at Universitat Rovira i Virgili in Catalonia, has started the process of cataloguing the emotional reception of emojis. 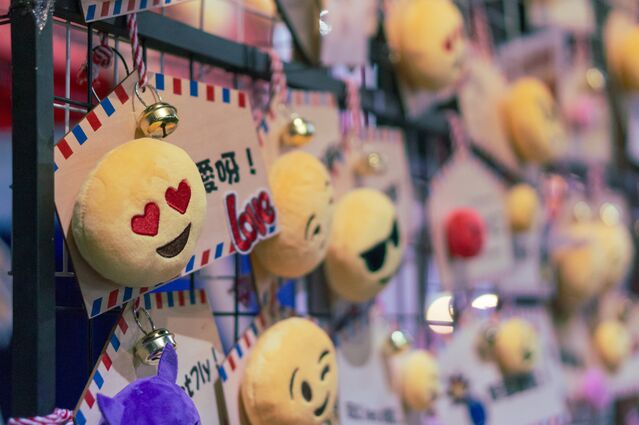 Small cartoon icons are increasingly becoming a part of our interpersonal strategies, but what do they communicate to others?

The modern-day library of emojis that are embedded into smartphone communication apps stems from earlier icons that we are all familiar with. Growing up, people will no doubt remember the hours spent on MSN’s ‘Messenger’ program while nudging their friends and sending emojis using shorthand key combinations, such as :-).

These primitive emojis were able to communicate basic emotions, but they were limited in their number and breadth. However, in an age of pervasive technologically-driven communication, emoji plays an important role in providing context to our conversations. As Dr. Ferré explains:

My main field of research is the processing of emotional language. I have always worked with words. I am currently very interested on emojis because of their potential capacity to express emotions and because of their widespread use in computed-mediated communication. Emojis substitute nonverbal cues such as gestures, facial expressions, and prosody.

An emerging body of psychological work is starting to explain how and why people use emojis, with their use being associated with various demographic factors, such as age and sex. Perhaps unsurprisingly, emoji use is more prevalent among younger people compared with those who are older, which Dr. Ferré and colleagues suggest might be indicative of a generational difference based on smartphone ownership trends and patterns of communication among young people.

It has also been reported that women use emojis more often than men, and that women—perhaps through their familiarity and more frequent use—perceive emojis as clear methods of communication.

The Emotional Value of Emojis

Despite this emergent work, it is still unclear how emojis are interpreted by people in a more general sense. Speaking about the value of their work, Dr. Ferré said:

The theoretical value of addressing this issue is related to the comparison of emojis to other emotional stimuli (words, pictures, etc.): Are they equivalent? Do they produce the same type of responses? Therefore, it is important to address this issue to know more about the characteristics of emotional processing in general and processing of emojis in particular.

To explore the emotionality of emojis, the researchers asked more than 1,100 students from the Spanish cities of Tarragona and Madrid to rate a random sub-selection of 1,031 emojis. Each participant was presented with more than around 30 examples, and rated them in relation to the following criteria:

Looking at the findings, there was a high level of agreement in the dataset with regard to the emotions and meanings communicated by emojis. This suggests that, in general, people interpret emojis in similar ways. However, familiarity and frequency of use scores were relatively low, meaning that it appears that people tend to use a rather limited number of emojis in everyday life.

The emojis that people do use seem to reflect faces, which aligns modern use with the historical use of smileys in previous iterations of communication platforms, such as MSN Messenger. Speaking of this, the authors wrote:

This is good news, according to Dr. Ferré, because it means that people may have a common emoji language with which to communicate. They added: “The analyzes carried out with these data reveal that a subset of emojis (mostly face emojis, which are the most used emojis) express emotions in the same way as other stimuli, such as words or pictures. much less used and not as useful as face emojis to express emotions.”

In short, this new research suggests that emojis communicate clear messages related to emotion and mood. This is particularly the case for emojis that depict faces. However, there are broader applications of this kind of work. As Dr. Ferré suggests:

The social value of this particular study may be not so apparent as its theoretical value, because this is a basic (non-applied) study. However, there are many fields of application. For instance, marketing (eg, which is the effect of including emojis in advertisements?), medicine (eg, using emojis in scales given to patients to rate their pain), etc.

This broader use of emojis might enable those with communication disorders to have a greater level of access to healthcare services, for example. However, this opportunity is still yet to be explored. What is clear, though, is that the picture-based evolution of our language may not lead to the misunderstandings that many might have feared it would.

The research is published in Behavior Research Methods.