In the previous post, we described a period of emotional turmoil, The Terror, that Dickinson experienced in 1861, followed by a resilient period of renewed energy. By 1866, however, her writing diminished, and she became even more withdrawn, rarely leaving the house. On those occasions, she wore light-colored clothing and became known in the neighborhood as The Woman in White. On the rare occasions when visitors would appear, she would not see them in person, but rather would talk from behind a closed door. What little social life she had was conducted primarily through letters and small gifts. The one notable exception was her relationship with Otis Phillips Lord, a judge with whom she shared literary thoughts, and whose interest may have become more romantic a few years later after his wife passed away. 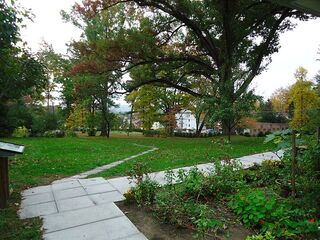 Yard of the home where Dickinson spent most of her life.

In these years, Dickinson’s view of religion and mankind’s place in the universe continued to evolve as well. Darwin’s publication of On the Origin of Species in 1859 led to widespread debate challenging the Calvinist notion that the world was based on immutable facts, among which was that mankind was exceptional, created by a miracle, and thus quite apart from the rest of nature.

Darwin pictured a very different kind of world, which was constantly, though slowly, changing, with continents rising and mountains appearing across geological time, and with a similar fluid process leading to the evolving of species. Dickinson, like Darwin, was also influenced by the death of loved ones, and also seeing the seeming brutality of nature in the lives of small creatures in their gardens and woods. These experiences made it easier to understand human beings as not being exceptional in their creation, but rather part of the natural world. Dickinson mentioned Darwin several times in her letters and had become more comfortable with the notion that the world was not immutably fixed but in a state of fluidity.

In 1874 Dickinson’s father died of a stroke while on a trip to Boston. The funeral took place in the entrance hall of their home, but she did not attend, instead listening from behind her upstairs bedroom door. The following year a stroke left her mother partially paralyzed and affected her memory. Dickinson’s writing declined to about 35 poems a year as she dealt with loss and her caretaking responsibilities. The year 1882 was notable for both the death of her mother, and also a family complication, her brother Austin had begun a rather public affair with the wife of an astronomy professor at Amherst. This led to some degree, withdrawal from his closeness with the rest of the family. The following year Dickinson’s nephew, Austin’s son Gilbert, with whom she was particularly attached, died, followed over the next decade by her friends Samuel Bowles, Charles Wadsworth, and Otis Phillips Lord. Isolated and seeing almost no one, her health deteriorated. By late 1885, she was frail and mostly stayed in bed; she passed away, from what at the time was thought to be Bright’s disease (chronic nephritis) in May 1886.

Later, her sister Lavinia found her papers, including correspondence and some 1800 poems. Lavinia honored Emily’s wish to burn her letters but had been left with no clear instructions about the poetry. Lavinia wanted to see them published, and turned them over, perhaps unwisely, to both Austin’s wife Susan as well as his lover Mabel Loomis Todd. A small volume, heavily edited by Todd and Thomas Wentworth Higginson, appeared in 1890, followed by other small collections, but the inevitable squabble between the two women and then their children delayed the publication of the complete works for several decades. Even in the early years the quality and freshness of the poems was recognized by luminaries such as William Dean Howells. Growing had critical recognition, and then the later notoriety of having competing volumes issued by the daughters of Susan and Mabel continued to spark public interest. Many more editions appeared in the early 20th century, but it was not until the 1950s that the first complete and scholarly collections became available.

There has been no shortage of retrospective analyses of Dickinson’s mental health. In 2000, psychiatrist John McDermott, in an assessment of her letters, suggested that at age 24 she had an episode that met formal criteria for a panic attack, and the beginning of agoraphobia(1), In a later study, he argued that during the first half of her most productive years, 1858–1865, the number of poems she wrote was much greater in the spring and summer compared to fall and winter, implying that she may have been affected by seasonal influences on her mood(2), This process was interrupted by the emotional upset we described earlier, which she termed The Terror. As we described, the end of The Terror marked the beginning of an even more productive four years, which he noted might be consistent with hypomania, raising the possibility that she may also have suffered from bipolar II disorder.

Certainly, Dickinson left much evidence of being very sensitive to the seasons, as well as numerous occasions in which she liked the winter months to death. One issue militating against the interpretation that the years 1862–1865 represented a period of hypomania is the very long duration; in data developed more recently than the McDermott 2001 study, about three-quarters of episodes in bipolar II disorder were reported to be for less than four weeks(3), There are, of course, alternative interpretations to her remarkable increase in productivity after The Terror. One could be that she now had the support of Thomas Wentworth Higginson, who she later credited with saving her life. Another could be that her new productivity was a response to having been so focused on death; indeed, she likened her new work to being like the boy who sings as he passes a graveyard. Viewed in this way, her output in those years might reflect the maturing and blossoming of a creative response to a period of depression.

Two decades later, when she was 53, Dickinson’s physician believed that she suffered from nervous prostration, At the time this was considered a form of neurasthenia manifested as fatigue, anxiety, and depressed mood(4), Aside from this, we know little of how her condition was viewed at the time. We do know that her life was marked by a number of deaths of persons to whom she was close, beginning with her cousin when she was 14, and that her response was so great that the family felt the need to send her away to live with relatives in Boston. Both her letters and poetry dwell on thoughts of loss, of which she experienced many.

In more recent years. it has been recognized that about 10-20 percent of bereaved persons develop what was first called complicated grief and is now formalized as prolonged grief disorder. Persons with this condition continue to grieve more than a year after the event, and manifest many of the symptoms of depression, though with some subtle differences; their self-derogatory thoughts, for instance, do not reflect an overall sense of worthlessness, but are rather oriented to belief in their having failed the loved one, and thoughts of death center on the lost loved one and the notion of joining them(5),

The question of whether this might fit Emily Dickinson, or whether this is an over-medicalization of a reaction to a universal human experience, is a specific case of a broader issue being debated for society at large. What we can say is that she was very sensitive to the loss of important figures, either through death or perceived withdrawal of affection. We can speculate whether this inhibited her work or whether instead she was able to transform these thoughts creatively into elegant lyric poetry. Like other figures in this blog, such as Herman Melville and Charles Darwin, the life of the writer has been as rich a source of fascination and supposition as the writings themselves.