Only recently have curls like these been more accepted.

Tips for taking care of curly hair flood our social media feeds. Quick videos show how to improve the care and quality of curly hair, with many feeling empowered to wear their hair naturally in a world that has previously shamed curly hair as being wild, immatureand unprofessional, People of all ages are learning to love their curls.

Growing up with curly hair

I first learned that my hair was somehow different when I entered elementary school. Growing up in New England in the early ’90s, I was not yet exposed to many people who did not look like me, yet they all seemed to have hair that looked nothing like mine. They could flip their soft hair over their shoulders or run their fingers through their soft locks a la Alicia Silverstone in Clueless.

My hair would not behave enough to allow for many of the hairstyles that were popular at the time, leaving me feeling different and left out. I would watch my peers run and jump at recess, their soft locks bouncing effortlessly without frizzing up. During storytime, they would take turns playing with and braiding each other’s hair. I was so envious! Nobody dared touch my hair, “because we don’t want to get stuck in it!” they would tease me, calling me “Frillis,” a name that not-so-creatively rhymed with my last name of Gillis. Ha. Ha.

It was the ’90s, and every girl wanted to have Topanga’s beautiful, long, straight hair. I would spend hours trying to straighten it with gel, pins, and other tools, usually crying in frustration before school every morning. And if it rained that day—forget it. I was confused about why my hair could not, would not, do the things that the other little girls’ hair did. I was determined that I was just one haircut or product away from a normal, hair-flipping life. My brother cut his red curls so short that one barely knew he had curly hair at all. At the time, I was envious that he could somehow escape from the madness in which I felt consumed.

My mom, having no idea how to care for someone with such curly hair, figured that cutting it short would be the best thing to do, and every year I sat in the hair salon while my hair was cut and thinned, obviously never making a difference in the texture or curl pattern. My curls grew upwards, adding fuel to the teasing fire that I experienced daily, exacerbating my stress.

I could not understand how on earth these other children could just do everyday things like take showers, go into pools, and take naps without having to plan what to do with their hair after! I felt robbed of my ability to just be a carefree child. My 10-year-old self felt like life just wasn’t fair. As I watched the other girls in class flipping their hair around, denial consumed me—if they could do it, I could too. I would make my hair behave. I would win this fight.

When it was insisted I play Little Orphan Annie In the middle school play, I decided I had had enough. Taking my mother’s shearing scissors in my hand before the bathroom mirror that night, I thought, “I’ll just take a little bit off the top. Just enough to make it not so puffy.” Snipoff went a few offending tendrils off the top who had dared grow upwards, having the audacity to defy gravity. That seemed easy enough, I thought to myself as I replaced the scissors without anyone noticing. And a few days later, I did it again. And then again.

About a week later, my mom asked me, “Are you doing something to your hair? It’s flatter on the top.” Good, I thought, it’s working. And I kept cutting my hair until I had cut off so much of my hair on the top that I had officially given myself an actual mullet that I lived with for the remainder of the school year. It looked bizarre, but it was the first sense of normalcy that I had experienced in my short adolescent life. I could take naps, swim, and run around on the playground without needing to worry about my hair. I felt free!

Of course, that only lasted for a short time, and then it grew back puffier than ever. High school offered some reprieve with the growing acceptance of hair gel, allowing me to at least tame some of the puffiness and avoid further teasing. However, I still found it so unfair that I had to plan my entire day around my hair or my entire week around hairstyles, while other people just carried on normally. I stood, baffled, watching other girls in the bathroom comb their hair and put it back in an effortless ponytailable to manipulate something that I felt had complete control of me.

It wasn’t until college when I shared dorm space and hair tips with curly people from all around the world. Learning care and style techniques and conditioning methods, I developed true self-acceptance of the hair that I had always assumed held me back. It took embracing my curls for what they are, instead of trying to change them, before I realized true acceptance,

Curly-haired people, especially women, are constantly asked: “Do you ever straighten it?” As if our hair somehow needs to be changed or altered in order to be accepted as normal. Growing up, I did not realize how many of those messages I internalized. Every time I sat in a salon chair under the premise of making my hair “less puffy” or “thinning” it, trying to fit in with my hair-flipping peers, I was teaching myself that my hair’s natural texture and body were somehow shameful or bad.

More than 20 years later, we still joke about the aforementioned “mullet days,” but I have learned to work with and not against my curls. Today, my curls are often a conversation starter, a stark contrast from the frustration and embarrassment I felt as a child. I would not change anything about them. Ultimately, my curls are my personality. They are me. But it took time for true acceptance. 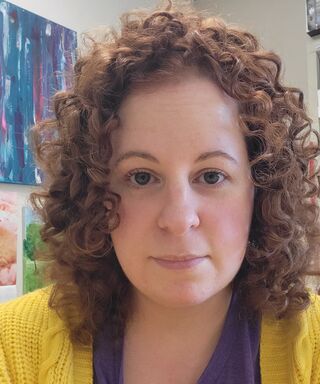 The author experiences growing acceptance of her curls.

Here are some suggestions that can help people come to terms with their curls.

1. Accept that your hair is sometimes different than some of your peers. It’s okay to feel like it’s unfair sometimes that we cannot just take naps, dips in a pool, or have spontaneous intimacy without having a plan for our curls!

2. Research and learn ways to care for your curls. Find someone who is skilled in cutting curly hair; it is worth the extra money. I did not realize how much damage I was doing to my curls by getting cheap haircuts or avoiding haircuts altogether (hello, pandemic?).

3. Love your curls. All the shapes, sizes, colors, spring qualities, and boing-iness of them—they are all different and beautiful!