Dog bites are a global public health problem. Much of what was known in 2017 is summarized in a book called Dog Bites: Comprehensive Data and Interdisciplinary Analyzes.1.2

I recently read a detailed ethological study by Sara C. Owczarczak-Garstecka and her colleagues: “Online videos indicate human and dog behavior preceding dog bites and the context in which bites occur.” This extremely important essay is available online, so here are a few snippets to whet your appetite for more.

The researchers analyzed 143 YouTube videos lasting more than five seconds, paying careful attention to the context of bites, bite severity, and victim and dog characteristics. For 56 of them, they coded the behavior of humans and dogs before the bites.

Some of their data can be seen below. These graphs refer to the behavior of dogs who bit people. 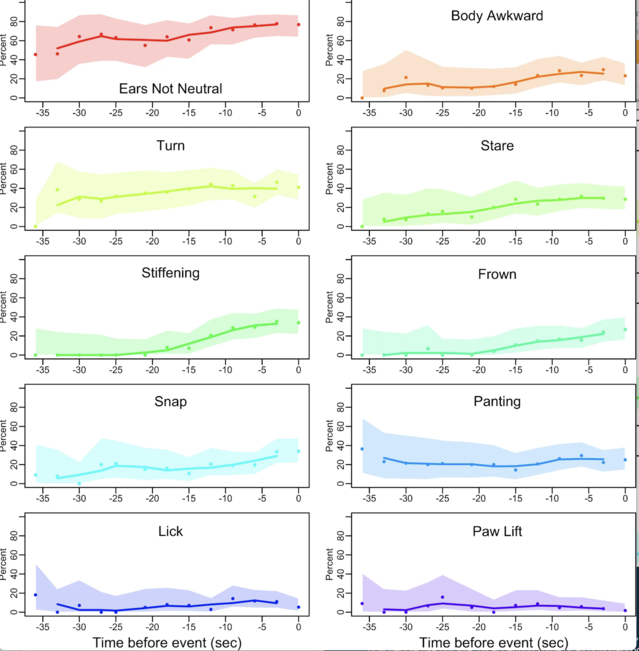 These graphs refer to the behavior of humans who were bitten. 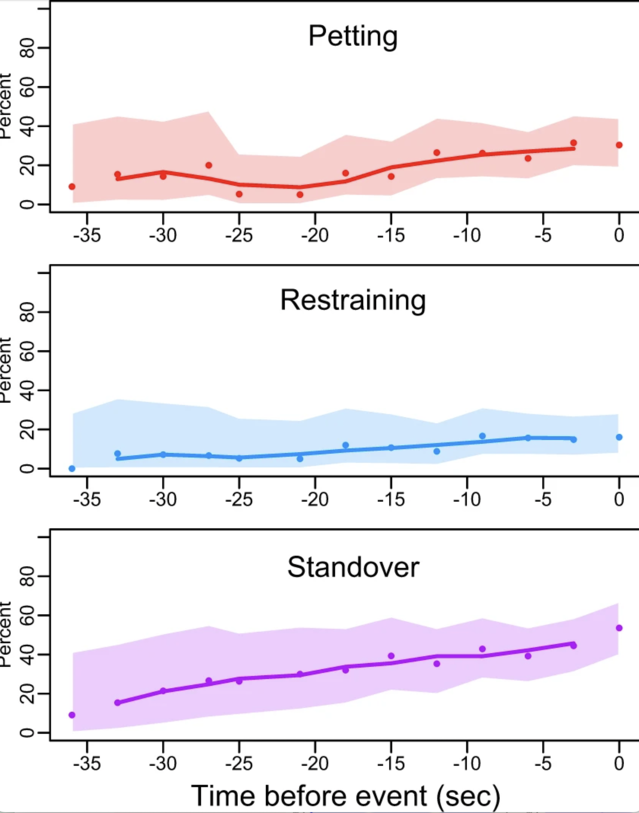 Patterns of changes in human behavior (petting, restraining, and standing over the dog) preceding the bite. Dots indicate observed proportions, lines represent 3-point moving averages, and the shaded area has 95% confidence intervals for the observations.

Here is a general summary of these data.

The researchers did not include a breed as a predictor of bites because of problems in a breed based on visual characteristics and a small number of dogs in each of their categories.

What do these data mean? Listen to what dogs are telling us and give them room to say no or consent to our presence and if and how we approach and touch them.

This is an extremely important study with many practical implications. Learning about the contexts in which dog bites occur demands careful scrutiny. The researchers noted the limitations of their database, but their data also reflects what has been learned in previous studies.

They also stressed that they do not offer causal explanations for why dogs bite in certain contexts but note that touching a dog increases approximately 20 seconds before a bite, as does standing or leaning over a dog. Some of their sage advice includes not leaning over a dog and, when in doubt, avoiding a dog.

I look forward to more ethological analysis of dog bites to see just how robust these data are. I imagine that further research will show some similar patterns of human and dog behavior preceding a good number of dog bites—many dogs I don’t like intrusions into their personal space—but more subtle aspects of dog-human interactions will also be detected that can figure into ways to prevent dog bites.

Dogs aren’t unconditional lovers—love muffins—who can be approached and touched whenever and wherever people want to have close contact. Similar to humans, dogs can have good and bad days, and my advice, even with familiar dogs, is for humans to be very careful about abruptly entering into their personal space and that they shouldn’t touch or hug a dog until they’re certain that the dog consents to be touched on their terms.

It’s best to approach dogs slowly and get a good read on what they’re thinking and feeling at the moment—even dogs you know well—and wait to touch or pat them. Get a good feel for where the dog is—are they cornered, or do they have room to avoid you if they choose to do so?

You can also ask their human how their dog is doing. Many times when I’ve asked someone how their dog is feeling—familiar or not—I learn that the dog is out of sorts for any number of reasons. So I talk softly to the dog and don’t approach or touch them. Dogs must have a say in how they’re treated, just as you like your feelings to be honored.

All in all, when you’re unsure about what’s happening in a dog’s head or heart, leave them alone. Don’t approach or lean over them and keep your hands off them—a win-win for all.