In 2021 quasi-pornographic celebrity videos and advertisements produced by People for the Ethical Treatment of Animals (PETA) in support of animal rights were watched 450 million times. They attracted nearly 800 op-eds and 73,000 media interviews and inquiries, from Good Housekeeping to Breitbart, Sports Illustrated to Women’s Wear Daily, Al Jazeera to Fox Sports,

What should we make of these campaigns and their reception? Media-effects researchers from psychology and communications have long sought to establish whether it is “effective to advertise an ethical cause using unethical means.” A study conducted in the US and Australia showed sexualized and non-sexualized PETA advertisements to young men and women. Support for animal rights diminished if it was associated with soft-core dehumanization of women, including when avowedly straight men were “aroused” by the imagery.

PETA’s “All Animals Have the Same Parts” advertisement poses Anderson in a bikini, her body drawn on to list rump, ribs, leg, shoulder, feet, round, and breast. The image was banned in Montréal, where officials deemed it counter to “the everlasting battle of equality between men and women.”

Anderson responded, “In a city that is known for its exotic dancing and for being progressive and edgy, how sad that a woman would be banned from using her own body in a political protest over the suffering of cows and chickens. In some parts of the world, women are forced to cover their whole bodies with burquas [sic.]—is that next? I didn’t think that Canada would be so puritanical.” PETA accused the authorities of “confusing ‘sexy’ with ‘sexist’.” 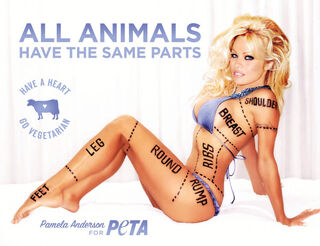 The Guardian suggested some “might gaze at the poster for carnal gratification rather than vegetarian epiphany.” Anderson replied that what she called a “butcher diagram” was “the perfect thing to parody, because it allows you to use your own body as a protest tool.” PETA dubbed her its “weapon of mass distraction.”

Perhaps the organization’s most notorious campaign was “Boyfriend Went Vegan and Knocked the Bottom Out of Me,” in which a young woman has a neck brace and dislocated gait because her lover has become more sexually vibrant since embracing veganism, consequently injuring her and damaging a wall during lovemaking.

PETA promised that veganism’s “freer blood flow to all of the major organs,” blended with the movement’s need to be “press sluts,” had encouraged the campaign.

Moralists find fault with these campaigns, invoking a Puritanical version of feminism: Business Insider lists “18 times PETA ads have used nudity, gore, and sacrilege to get your attention.” The National Review advises its readers “to do exactly the opposite of what PETA demands.”

Progressives are also concerned. Australian Feminist Studies takes the images to task for a heterosexism aimed at satisfying men and setting unreachable goals for women that multiplies conventional objectification.

Ms, magazine has redefined PETA as “People for the ethical treatment of anyone but women.” Affinity magazine with “weaponizing and exploiting the oppression of marginalized minorities.” The Huffington Post accuses the organization of failing to acknowledge and counter the connections between fashion, beauty, animal torture, and its “own use of pornography” and seeming “to care very little for one animal in particular: human beings.”

But there is another side. Feminismo/s argues that the “animalization of women in advertising” does not only degrade; it may also empower, by drawing attention to cultural associations of women with our fellow-animals and the oppression of both by semiotic clichés and literal violence. The use of stylishly-dressed but skeptical-looking young women drawing attention to the destruction of animals as key aspects of contemporary fashion highlights female power.

Beyond debates over pornography, PETA is vulnerable to critique because of its co-optation by business interests: the organization proudly lists corporations whose practices it has helped change, and advocates shareholder activism.

Companies endorsed by PETA for “getting” the message describe themselves as citizens; but their principal pursuit is economic self-interest. A restless quest for profit unfettered by regulation is twinned with a desire for moral legitimacy and free advertising, based on “doing right” in a very public way—while growing rich in a very private one.

If green activism is ordered around consumption, per PETA, those who do not consume, or barely do so, are ipso fact excluded from the exercise of power, in the same way as they are marginal to decisions made by the International Monetary Fund or the World Bank, where voting is decided by financial contribution.