My partner died unexpectedly in 2020. He had a heart attack and died in my arms. Our four dogs were all I had to keep me going. Over the next six months, I could only be away from our dogs for a couple of hours before I was a crying, bitchy, anxious, freaked-out mess. ,Brenda dog lover

In 2015, the American Psychiatric Association officially recognized separation anxiety disorder as a diagnostic category of mental illness. It applies to both children and adults who have an “unusually strong fear or anxiety to separate from people they feel a strong attachment to.” But can individuals like Brenda, who are extremely devoted to their companion animals, experience separation anxiety when they are away from their pets?

I recently posted a message on Facebook saying I was interested in hearing from people who had suffered from anxiety when they were away from their pets. I quickly got several dozen responses. Susie, for example, described her fears when she leaves her cats at home by themselves. She wrote, “I think of all the horrible things that could go wrong—fire, carbon monoxide, etc.—and them dying scared and alone.” Joan said her anxiety got worse during the pandemic—now she takes her two dogs with her nearly everywhere. Susan wrote, “I love my dog ​​soooo much. I constantly feel like I’m on borrowed time with her, and it makes me anxious to leave her home when I’m at work. I rearrange my life to try to be around her.”

In a study published in the Journal of Affective Disorders, Australian researchers explored the psychological underpinnings of pet-owner separation anxiety. The lead researcher was Elisha Dowsett of the University of Adelaide, and the subjects were 313 Australian pet owners, 90% of whom were women.

The participants completed four standardized psychological scales. Owners with multiple pets were instructed to think of the pet they felt closest to when responding to the items. The research materials included:

The Research Questions and Their Answers

Here are some of the questions the researchers addressed, along with the answers.

Question 2: Are pet owners who are especially attached to their pets more likely to experience pet separation anxiety?

Answer: Yes. There was a strong positive relationship between the pet attachment and the pet-separation anxiety scale scores.

Question 3: Are people who have less social support among friends and relatives more likely to experience pet-separation anxiety?

Question 4: Do dog and cat owners differ in the degree to which they experience pet-separation anxiety?

Question 5: Are pet owners who do not have children at home more prone to pet-related separation anxiety?
Answer: Yes.

To summarize, people who experienced pet-related separation anxiety tended to be highly attached dog owners who did not have children living at home and who had limited friendships. In addition to being anxious about their animal companions, they were also prone to worry about losing the important human attachment figures in their lives. (Keep in mind that these were general trends and did not apply to all of the subjects who suffered from pet-related separation anxiety.)

The second study was conducted by the anthrozoologists Alexa Carr and Patricia Pendry of Washington State University and was published in the journal Anthrozoos, They were interested in pet-separation anxiety in a group of stressed owners—college students at the beginning of their freshman year. After all, many new college students are undergoing a period of great change in their lives, including separation from their family pets.

The research was conducted in two phases. During the summer, arriving on campus, incoming freshmen were sent an email inviting them to take part in the study. Students with pets who agreed to participate completed an online questionnaire. The items focused on attachments and interactions with their family pets but some of the items were related to their levels of stress, including having a history of mental health issues.

The second research phase was conducted two weeks after the subjects arrived on campus. This time, the students were asked to complete a questionnaire on pet-related separation anxiety. Like the Australian researchers, Carr and Pendry used a modified version of the Severity Measure for Separation Anxiety Disorder adapted to measure pet-separation anxiety. The subjects were asked, for example, to rate the frequency that, over the previous week, they had experienced “feeling anxious, worried, or nervous about being separated from my pet.”

The results were surprising. Three-fourths of the 145 participants had experienced at least mild pet- 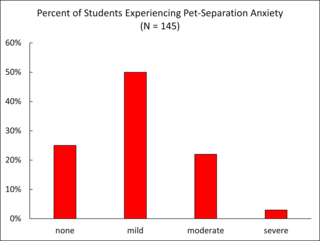 separation anxiety. Twenty-two percent of the students indicated that their anxiety was moderate, and in 3%, it was severe. As with the Australian study, individuals who were most highly attached to their pets were also more likely to experience pet-related separation anxiety.

These studies suggest that pet separation anxiety is an important aspect of the human-animal bond that has been neglected by researchers.

This morning, when I told one of my neighbors what I was writing about, she said, “Oh, you should talk to my husband. We were supposed to go to Europe for a month, but he wanted to come back two weeks early because he was worried about our dog.”