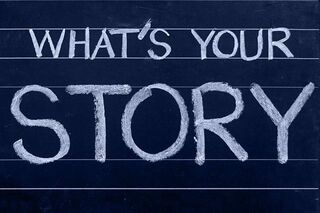 In therapy, we work on helping people change the life scripts that keep them stuck playing the same tired, old roles that lead to disappointment, depression, and rejection, three “D” words that are the currency of personal misery. They enact unwritten scripts, playing parts learned early in life, and continuing to perform these roles even when everyone else has left the stage. A good therapist is something of a script doctor, helping people rewrite the roles they play, especially those based on distorted views of themselves and the world.

The life lessons we learn in childhood form the narrative structure of the scripts we enact. If we felt unloved and unwanted, we may come to view ourselves as a loser or failure. We expect to fail, which becomes a kind of self-fulfilling prophecy. Another early narrative labeled “don’t take chances” may have been influenced by parents who conveyed that because life is so precarious and the world is such an unsafe, insecure place, you need to avoid taking risks at all costs, even if it means remaining stuck in an unhappy marriage or career. Another life script I often see in my patients is based on the belief that self-worth hinges on what others think of you, so when others don’t fulfill their parts in making you feel good about yourself, you have a right to be angry and resentful and blame them for how your life has turned out.

In replaying tiresome old scripts with new people cast in familiar parts, you remain a prisoner of the past. Psychotherapy is an opportunity to reappraise yourself in a new light, putting aside who did what to whom in favor of what you can do for yourself and others. Perhaps you need a script doctor, aka a therapist, to help you rewrite your personal narrative.

A Case in Point

I had been seeing Christina, a 37-year-old divorced mother of two, in weekly therapy sessions for about three months by the time she met Ken at a local bar. I had come to know Christina as someone who was struggling with depression and poor self-esteem. Her mother had been an alcoholic, and her father, a gambler and womanizer, had abandoned the family when Christina was 10. It didn’t seem as if there had ever been anyone in Christina’s life who was there to help her feel competent or capable of leading an independent life. No one had ever been there to put their arms around her to help her feel secure or safe.

Her self-talk was dominated by defeatist attitudes in which she catastrophized minor disappointments, turning them into major defeats. She judged herself to blameworthy for many disappointments in life, especially those involving failed relationships with men. The men she pursued were generally cut from the same cloth as her father: handsome, conceited, and narcissistic. “Men who acted like they were doing you a favor to talk to you,” she recalled.

Typically, after a few weeks in a new relationship, the man would stop calling her, or there’d be a terrible fight and it would end abruptly. Christina would then feel deeply depressed, blaming herself for failing to hold the man’s interest, and doubly angry at herself for allowing yet another man to walk all over her. She recognized that her unrequited need to please her father was being replayed in these destructive relationships. She also realized that she still blamed herself for her father’s abandonment: “I wanted to be the perfect little girl,” she reflected, “but I guess I just wasn’t perfect enough.”

Like Christina, do you reenact tired old roles with new players? Take a minute to ask yourself these questions about your relationship patterns:

Self-esteem deficits may lead us to look for love not only in all the wrong places but also in all the wrong faces. Feeling down on ourselves, we look for partners who stand only too ready to confirm this negative self-image by walking all over us. We permit ourselves to be victimized and exploited and hate ourselves all the more for our powerlessness. The partners we find may embody the rejecting characteristics of others from our past, those whose love we neither received nor felt we deserved. We may search for partners to play roles such as the punishing lover, the rejecting partner, or the demanding parent.

In therapy, we work on identifying these personal narratives and how they can come to limit a person’s choices in life. What role are you playing in your life script? Is the role working out, or do you think you’re ready for a rewrite?