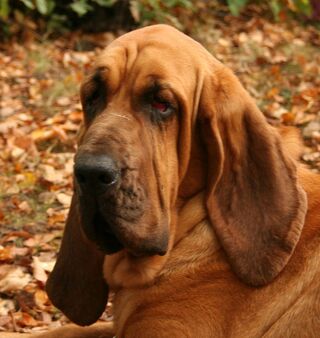 Since the results of the recent Westminster Kennel Club Show named Trumpet, a bloodhound, Best in Show, I have been inundated by people trying to find out more about the breed. The only information most people seem to have about this type of dog seems to be the stereotype of a frenzied pack of murderous bloodhounds in wild and noisy pursuit of fleeing slaves or escaped criminals. Because of that, some of the questions have been about whether the “blood” in bloodhound refers to the dogs being bloodthirsty, because people make the assumption that they ripped fugitives apart once they caught them.

Before we get to the science associated with these dogs let me disabuse you of that stereotype: Bloodhounds are large, gentle beasts that are more apt to confront a cornered criminal with excited friendly licks rather than bared teeth.

The Making of a Scent Hound

These big-nosed, jowly dogs have been around for a long time. Traditionally they are traced back to the St. Hubert Hound, which was a clearly established line of dogs bred by monks at the St. Hubert Monastery in Belgium as early as 1200 AD These hounds had been selected for their scenting ability, and were used to track deer, wolves, and wild boar. They were imported into the UK and were well established under the name of “Bloodhounds” by the 14th century, differing from the St. Hubert Hound only in their size and coat color.

Although all dogs have fine scent recognition abilities, their sensitivity can be improved through selective breeding. If we look inside the nose of the Dachshund we will find around 125 million scent-receptor cells, while the German Shepherd has about 225 million and the smaller beagle about the same. The big-nosed bloodhound checks in with about 300 million scent receptors, the largest number in all of dogdom. (Nasally challenged human beings have a mere 5 million.)

Not long after the breed had been established, they were given a new set of tasks, besides tracking game. They were given the job of search and rescue, such as finding lost humans in wilderness areas. Their occupation was then expanded when their talents were employed by law enforcement to track and find criminals, such as escaped prisoners. The first published report of a bloodhound tracking a person came from scientist Robert Boyle, best known for his important work on gases, in the mid-1600s. He was extremely skeptical about the reports of a bloodhound’s abilities until he was able to confirm that a bloodhound had managed to track a man over a distance of several miles.

Bloodhounds have since gone on to demonstrate their remarkable tracking abilities many times. For example, around the turn of the 20th century, a bloodhound named Nick Carter (after a popular dime novel detective) was credited with more than 650 finds and his nose gathered evidence which sent 126 criminals to jail.

James Earl Ray, who some years later would be convicted of the assassination of Martin Luther King Jr., managed to escape from maximum security Missouri State Penitentiary near Jefferson City, where he was serving a sentence for another crime. It was several hours before his jailbreak was noticed and the usual procedures for recovery were put into action; however, he was not found. More than 48 hours later, a bloodhound named Buttercup was brought in to join the search. The one clue that the police had was the direction in which Ray had started. There were clear footprints in the moist ground, from a pair of rubber boots Ray had stolen because he thought that they would keep any dogs from picking up the scent. This kind of deception really doesn’t work, since the rafts of skin that carry the scent are shed by every part of the body, and there is always quite enough for the dog to follow. The weather had been drizzly, and the ground was damp, but Buttercup did not need the added information from a fresh trail. She struck off and never once deviated from the scent trail. A few hours later she stood excitedly howling at Ray’s hiding place, some seven miles (11 kilometers) from the prison.

Buttercup’s performance seems astonishing, but there are reports of dogs tracking even older trails over longer distances. The longest I have been able to verify comes from a search-and-rescue bloodhound named Randy, whose handler, Stephen Johnson, was called upon to track a pair of children who had been lost in a large wilderness park. The children had last been seen playing at one end of the campground near a path, so the search began there. Randy sniffed some of the children’s clothing and then confidently started down the path at a brisk pace. Some 5 hours later, and close to 35 miles (56 kilometers) from the campsite, Randy found the two frightened and hungry children. They were still moving as quickly as their little legs would allow them in a direction away from where they started in a misguided and misdirected attempt to get home when the big brown dog came to their rescue.

Can You Escape the Bloodhound?

Adventure and crime stories have often misled the public by describing how criminals escape from tracking bloodhounds by jumping into a stream and running down it to wash away their scent and obscure the trail. The idea that this strategy would work is only a half-truth. The problem is that bodies of water retain scent. If the stream is large and deep enough, and if the flow is fast enough, the man’s scent may dissipate. But if the stream is not very deep, and the flow not very fast, or if there are breezes wafting across the water, the scent will actually spread out along the banks of the stream and cling to moist surfaces there. For a fresh trail, this still provides more than enough information for the tracking dogs. Five or six hours of direct sunlight will, however, probably destroy the odor. High winds can also dissipate and scatter the scent just as flowing water can. So the ideal conditions for a prison break to evade tracking dogs would either be during a heavy downpour of rain with high winds, or a very hot, sun-filled day, with high winds and a head start of five or six hours.

A good tracking dog does not depend solely upon the scent of his quarry to follow its trail. Footsteps disturb the soil and bring up fresh odors. Walking on grass or other vegetation crushes or breaks bits of it, again stirring up new odors. When the track is fresh, these will mix with the scent of the quarry. Fortunately for the tracking dog, many of these scents persist longer than sweat and pheromones, even in direct sunlight, so that, even if the quarry’s scent is fading, the dog can use these smells to keep on the trail, as long as not many other people are walking over the same ground.

It is hard to escape the long arm of the law or the big nose of the bloodhound.

Copyright SC Psychological Enterprises Ltd. May not be reprinted or reposted without permission