Steve Jobs, James Cameron, Stanley Kubrick, and Martha Stewart are among famous people who have either claimed to be or have been labeled perfectionists, What is perfectionism? Does it mean achieving excellence? Or something else?

Published in the June issue of Journal of Personality and Social Psychology, a recent study by Gaudreau et al. suggests excellence and perfectionism differ in important ways. A summary of the paper follows.

Perfectionism refers to setting, working toward attaining, and a preoccupation with goals that are unrealistically ambitious (eg, flawless beauty). Perfectionist people have very high expectations of themselves, to the point of being harshly self-critical.

Perfectionism is often seen as having multiple dimensions:

Despite the overlap between perfectionism and excellence, we often use different words when discussing each:

So, perfectionism could be defined as “a tendency to aim and strive toward idealized, flawless, and excessively high standards in a relentless manner.”

And excellence or excellencism may be defined as a “tendency to aim and strive toward very high yet attainable standards in an effortful, engaged, and determined yet flexible manner.”

The model of excellencism and perfectionism (MEP) suggests both concepts involve the pursuit of high standards, but with different goals,

In short, excellence is just not good enough for perfectionists.

The present research aimed to empirically test the assumptions of MEP and the relationship between excellence and perfectionism.

Investigating the relationship between perfectionism and excellence

Study 2, using three samples (N = 312; 315; 174) found support for the discriminant validity of excellencism and convergent validity of perfectionism. This investigation, along with Study 3 (N = 190), also found support for a few other assumptions of the MEP. For instance, perfection strivers, compared to excellence strivers, are more likely to set the goal of attaining a perfect grade (A+).

The results of Study 4 (N = 191), along with the previous two investigations, also showed excellence and perfectionism are “distinctively associated with indicators of psychological adjustment (ie, life satisfaction, goal progress, and imposter feelings) and academic achievement.”

Excellencism, not perfectionism, correlated with lower depression and higher life satisfaction and progress toward one’s goals, in addition to increased probability of getting higher grades, being a straight-A student, and experiencing more academic improvement over time.

Study 5 (N = 153) concluded, among other things, that excellencism and perfectionism are distinguishable not just at the functional level but also developmental level.

Although some perfectionists (eg, narcissistic ones) view themselves as already perfect—and feel entitled to special treatment, devalue others, and judge people’s imperfections harshly—most perfectionists tend to be more self-critical than other-critical. For instance, they tend to have little self-compassion, experience too much doubt, and feel unhappy and dissatisfied.

Do these negative results mean that “non-perfectionism” is the answer? No. As the studies reviewed showed excellencism may be the healthier, more adaptive, and more beneficial alternative.

Excellence means setting goals and working toward objectives that, although high, are attainable. Like those who pursue perfection, people who pursue excellence are engaged, determined, and focused; however, their approach is flexible and their goals are different.

For instance, those who pursue excellence want to produce high-quality work, be very productive and successful, and accomplish big things, but they do not have an ultimate goal of reaching perfection (eg, being a perfect person, giving a perfect performance) .

The research by Gaudreau et al. showed excellence strivers report well-being outcomes (eg, goal progress, self-esteem, life satisfaction) either resembling or better than those seeking perfection. And though perfectionists were more likely to aim for perfect A+ grades, the performance of students who pursued excellence was often better in comparison (eg, higher grades, more likely to be a “straight A” student or improve their performance over time). 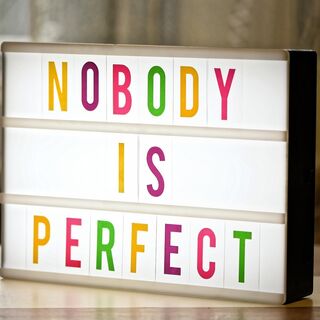 So, aim for excellence, not perfection, because the former is not as psychologically costly as the latter (in terms of unhappiness, doubts, and dissatisfaction). In addition, excellence is associated with equal or better outcomes in many domains (eg, academics).

Aiming for excellence is about being efficient. Pursuing excellence, instead of perfection, is the optimal choice because you invest less time and effort but achieve similar or greater success. Increased success can then create more opportunities (ie potential for success) and, over time, greater well-being (happiness, life satisfaction).

In summary, as the saying goes, perfect is the enemy of good. Aim for work that is high quality, not flawless.